Future plans for RCOM include expanding the zone with map(s) from previous STALKER games. 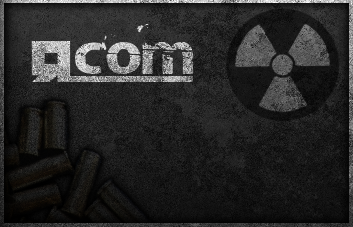 Why add any additional map(s) to RCOM?

RCOM is a mod that has deep roots in realism and gameplay, not in content and visuals. Upon initial rumination it might seem that adding more maps is somewhat queer to the primary objectives of RCOM. On the contrary, adding additional map(s) to RCOM will serve chiefly as a gameplay improvement and an immersion enhancement.

How will any new map(s) benefit gameplay?
The rational behind it is quite simple, really. In STALKER:CoP, as a player you are never forced to travel carefully through long, dangerous, mutant/anomaly/renegade infested distances; all while expediting your march through the Zone to make it to your destination before night falls and the muntants own the lands.

Any added map(s) will serve as "routes" to and from the current locations found in CoP -> Zanton, Jupiter, and Pripyat. Paying for a guide will be much more expensive, and you'll have to travel by foot to get between the large zones. A trip to Pripyat will no longer ask you to give up a few measly Rubles, but potentially your life instead.

I'm currently given particular thought to the Marshes/Swamps and Red Forest, both from Clear Sky.

Nice idea when will you implement these new ideas? It sounds super awesome by the way! Nice mod.
PS. Do you know when anyone will add any major weapon mods to Call of Pripyat, weapons that are from the east(Russia) and maybe some that are from the west(but only old ones not the latest western weapons.)

Right now I'm working on getting a single map in, instead of the whole set of CS maps that I used for the demo (someone else compiled ai maps and the such, levels just needed added). Once I get the tools sorted out (their in Russian, instructions and version take a while to figure out) and make sure everything compiles in nicely, doesn't crash without A-life added, then I will start filling the map.

SMRTER mod (not on moddb) for CoP has a bunch of weapons added. They come from various sources. Check that out if you're curious, although know ahead of time that it is in "alpha" stage. The creator of it also is very prompt on answer questions. I believe that is the most downloaded CoP on filefront.

If I add any weapons, it won't be many. There are some Russian mods with weapons added, but many of them have improper or no animations. Another problem is iron sight alignment as well. In ShoC the weapon was part of the player's hands, but in CS and CoP it isn't, so iron sights can't be aligned using the SDK like they were for Arsenal mod in ShoC. They can be done via guess & check, although it is EXTREMELY tedious, and getting them even as close as the vanilla ones can take months, let alone getting them as accurate as the fixed alignments that I use for RCOM.

Last reason I'm not too keen on adding more guns, is because most of them would be repetitive gameplay-wise. With the exception of a few classes of weapons (eg. bolt actions, semi-auto rifles, revolvers) they wouldn't add to the gameplay.

I am, however, redistributing weapons amongst stalkers. Most Stalker's will have Eastern Bloc weapons, Military will have higher end stuff, Mercs will have NATO weapons, ect. Sometimes stalkers will cary upgraded variants of their weapons as well, mostly at higher ranks.

This is definitely something I would like to see. Although it would take a lot of work, what you could do is create 3 or 4 separate routes between each of the 3 zones, and add new mapping missions where you explore the routes, find a way through, and sell the info to the nearest guide for a prize + discount.

The shortest routes should be the most dangerous, but also give the greatest reward. For instance, a run through Red Forest would get you to Pripyat, but the road could be extremely hazardous. Meanwhile, there could be a way through the Brain Scorcher lab that comes out at a sewer exit in Pripyat or connects to the canon underground section.

I only wish CoP had more maps like Wild Territory in Shadow of Chernobyl.

Some good ideas you have there. I particularly like the one about selling the map, but possibly "escorting" some stalkers instead. It would be nice to be the guide for a change.

I doubt I'll add the power plant again however. Filling one or two maps is already a lot of work for one person. I plan on making Pripyat more dangerous though, with nicer rewards.

Nice to know. In all fairness, the NPP map was pretty much perfect as it was, without any modification (The hidden sniper run being the best map in SHoC). I'm not sure how much effort would be involved in porting it to the newer version of X-ray.

Putting it on the wishlist anyway.

Yeah, escorting would be a perfect way to run the mapping missions. Just gotta be careful about the AI, I always found it pretty dumb when it came to SHoC style anomalies and I don't see AI characters getting past CoP style anomalies short of scripted sequences (Think like HL2. You do a long run, Alyx follows once the danger is gone.)

[Roadside Picnic Reference]
Also, please please please add a wishgranter (not a monolith, but a large copper ball) in a quarry-like map, with a huge impassable whirligig dubbed 'The Meatgrinder'. There would be no way past the meatgrinder, but sacrificing a follower into it would cause it to shut down for a few minutes.

Put a nice artifact in there as well.

CS NPP works fine, I was just there. Its not really that great of a map for any sort of freeplay, its really made for a scripted sequence and to look cool.

Shoc NPP was great, but is somewhat linear as well for what I want to do. Same with Limansk and even ShoC Pripyat to a degree. There's enough structures, story, and NPC's in the CoP maps, and what I want is to use 1-3 maps as "wilderness" to cross. I want to make the going deeper into the zone and back a very dangerous trip again, similar to ShoC. So far I can't find any more suiting maps than CS's Marshes and Red Forest, without going to the 1935 build.