New planetstorm release on the UDK engine! This 2-map showcase is completely standalone and features both full offline bot support and online/lan multiplayer!

As part of Epic's ongoing promotion of the UDK engine, we've released a showcase using the content from the Unreal Tournament 3 mod and rebuilding it on the UDK engine. This showcase is a complete standalone game (no UT3 required) and is available free on the UDK website's SHOWCASE section.

The showcase features 2 familiar maps totally reworked with UDK's amazing new Lightmass lighting technology, an inbuilt IRC chat lobby and a host of rebalances and bugfixes. definately the most awesome version of planetstorm to date. The game is completely standalone and features both full offline bot support and online/lan multiplayer! 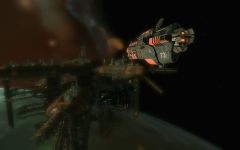 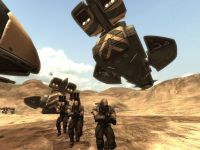 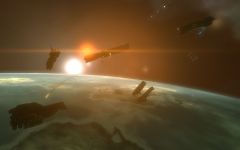 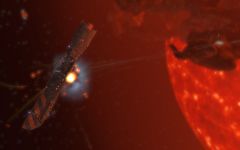 It has been our intention to make a UDK game ever since the announcement of epic's latest-gen development package was made public. Our original plan was to *go dark* for a year and totally rebuild the game, but Epic managed to persuade us to port our mod to the UDK for this showcase.

you simply would not BELIEVE what we have planned for next year :) sit tight! watch this space-time!

Also, because Henley bless him hasn't got round to it yet, we'd like to trumpet the fact that we won

This has made us VERY happy and also very rich :) Our plan now is to incorporate as a company, and release a full game next year.

RC8, and indeed any version of our UT3 mod is now no longer supported. thankyou SO MUCH for your support. The new UDK version of planetstorm will be appearing on a new MODDB page with all attendant fanfare, as and when we have stuff to show.

Awesome! definite purchase when the full version is available, any word on the release method? steam at all?

it will be available via steam, yes

steam is good^^, and i think an english version is enough, but you definitely need commercials at steam (in the news), archievements and pre-ordering will be available at steam for your game??

Anyways, it's great that you're going to launch it as a full game (sadly the number of UT3-owners isn't big...), and i wish you a huge success^^

WIll it cost something?

its independent now, no UT3 needed. we aren't sure about achievements yet...

the full retail version of PS will cost money. this however is the showcase, not the full version.

how much will the cost be?

smaller download for udk standalone than the rc8 mod...
is the standalone missing something?
or am I?

Yes. The standalone only has 2 maps whereas RC8 had 6.

also you dont need to download a whole bunch of UT3 content anymore, it was with RC8 or it wouldnt work.

I don't s'pose there'd be a way to make the UDK version mappable, would there? If it isn't already, I mean.

Sadly I have some large downloads going right now already, but this is at the top of the list of next things to do.

no sadly the packaged UDK does not come with the editor and all asset are cooked.

however - you could always apply to join the team! are you any good? we're looking for advanced to intermediate mappers over summer...

Sadly not anywhere near Intermediate, was just curious though. :P Thanks for letting me know.

Awesome! With all the content you've loaded into the mod and now the UDK, you've already got my purchase!

Congratz in the contest! An incredible mod, soon-to-be game.

Just for clarification: You said that Epic convinced you to port your stuff to make this showcase. Are you still going to completely rebuild? Or will everything just be a port?

The MSUC version and the showcase is deeply flawed with numerous concessions affecting gameplay due to time constraints and haphazard and harried planning. The original envisioned game is a bit different from the current UT3 mod/UDK showcase version. Now that we can finally relax and take our time, we will try to achieve the original game design (with some necessary hard thinking and changes of course) using what we have learned from our participation in the MSU contest.

congrats! I I tried it onUT3 and it was awesome! Hope that you will be releasing some new stuff soon.

I love you guys! can't wait to see the final product =) congrats on the prize you deserved it!!! =D

Thank God for this update. Now I have hope for this mod/game.

Looks awesome, and congratulations, but... only two of the six maps? :( Hm... Seems like if you're going to totally rebuild the game it wouldn't hurt to showcase the other 4 as well. Personally I think the harbor one is a lot more graphically impressive than the desert colony. It seems like it would go a long way towards keeping up interest in the game. Maybe you can release the other four maps for the showcase over time to keep the hype up until you release the retail version... Course maybe I have no idea what I'm talking about. :p

we only had time to convert two maps to UDK, this is just a showcase not another full release.

the retail full release will have more maps than RC8.

You should put all the maps from the latest build into the demo. Currently there isn't any point to playing the demo if you have UT3. There's never any more than 10 or so real people in the UDK-version server.

we still have smackdown night every saturday and sunday on our server starting at 19:00GMT.

Yeah I remember shooting you in the head a few times :3

is possible reduce the graphic settings?

I've been following this mod for about 2 years now and you have no idea how happy I am for you guys!

You defiantly have a purchase from me! Maybe two or three for a few close friends of mine! LOL

Hi guys, i downloaded the showcase, but for some reason, ( was the same with RC8) i can never see muzzle flash, is there anything i can do> the rest of the game works fine.

if you want the minimal settings you can type in console (opened by pressing the ` key):
scale lowend
and than
scale set skeletalmeshlodbias 0

alternatively you can modify all settings through the .ini files. Make sure the game is not running, and go to \AFFPplanetstorm25a\UTGame\Config

open UTEngine.ini in notepad. And look for the section [SystemSettings] (it is pretty far down)

Changing them to this will give you the better performance.

that should be good enough i think, but certainly not less.

how many maps are you planning to have in the final product??

Not sure yet. More than two :D

is there anyway to just get the muzzle flash working, it only works sometimes for me, is quite annoying coz the game is amazing.

You mean the dynamic light? I suspect one or both things, maybe we forgot to add it to some guns (or broke it), or the engine is automatically dropping them when too much is going on as a performance thing. Can't do much about either for the moment I'm afraid. We will look into it however, as we intend to do at least one night-ops level...

hmm, i think the latter sounds right :/ it happens when a lot is going on.

I have low Graphic (it looks like half life 1)and cant find any graphic option in the udk planetstorm settings.

i have no sound !

i will post this in your forum but the aktivation key for make an full account make an error.......

All driver up to date
no virus,spy or maleware

to get the highest settings open up the console with the ~ key, than type:
scale highend

as for the sound problem; UDK doesnt work well with 7.1 and 5.1 setups, 'normal' speakers should work.

how to use normal speakers ?

answered you on our forums: Affuniverse.com

I saw that you plan to release this via Steam, but will it be available via disk as well? I use steam, but I prefer hard copies of my games, and this deserves the extra little bit anyway.

Depends whether we secure a publisher deal, and how large a cut in profits we are willing to give away to third parties on top of what Epic will already take. I would love to own a disk copy of course, but at this time we do not know.

Any chance we'll be seeing a Mac/Linux port of the game?

Entirely in the hands of Epic as to whether they make the UDK framework compatible. Currently, it isn't.