I am leaving my job in 2017 to develop this game full time.

I'm pleased to announce that I'll be leaving my full time job starting January 1st, 2017 to work on Wartek full time. I'll be living off money I've saved up, I'm confident I can get Wartek into a decent playable state or perhaps even a sellable state in that time frame. Progress over the last 6 months has been slow, the main reason I am making this decision is because my job is getting in the way; whenever I work on Wartek I end up getting no sleep.

But that's not to say nothing's been accomplished since my last update article, I have accomplished the following:

Projectile Simulation- Completed code that handles bullet penetration through armor, this takes into account what the armor is made of (hardness factor), armor thickness, the bullet's expansion factor (tungsten, steel, lead, etc. have separate expansion factors assigned that effect penetration distance), the energy the bullet has at the moment it hits the armor, and the hit-angle.

I've made this image to illustrate how I am using trigonometry to calculate how much armor the bullet has to travel through to penetrate given the hit angle and armor thickness: 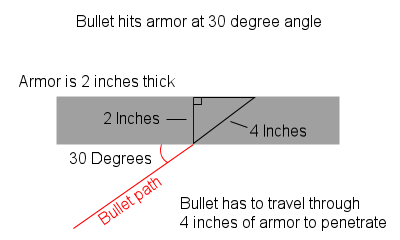 At it's current state the game basically just prints whether each shot penetrates and remaining velocity when I shoot at a mech. There's no code handling mech internal damage yet, neither is the simulation working over the network yet.

My goal is to approximate real world physics, not to match it perfectly, I've tested my simulation to see how it stacks up to real world statistics and penetration values are coming within about 0.1 of an inch of what they should be, which is good.

New Larger Map + Map Performance Optimizations- I've created a new 24km x 24km temperate style map and placed about 400,000 trees on it using a landscaper script. I also did a lot of performance optimizations having to do with the terrain resolution, amount of terrain tiles, and the way the zoom camera works. This new enormous map along with all its trees will run on my low-end laptop with a GTX 960m at a stable 60fps. Here is a screenshot (you can see a bigger version in the images section): 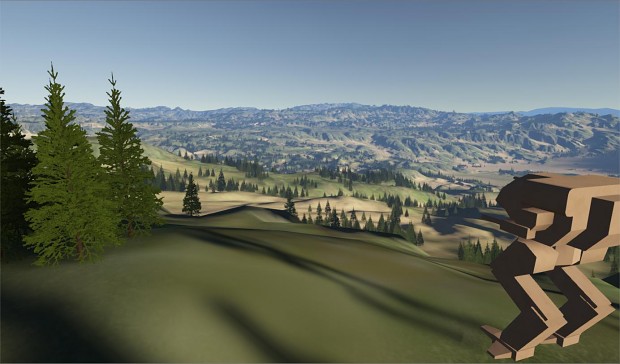 Well that's all for now, thanks your reading!