Today we are showing off a render of the Renault UE, a small French armoured supply vehicle that was also used by the Germans.

Today we are showing off a render of yet another vehicle that you may have seen in our Dev Stream of Pegasus Bridge. It is of course the Renault UE Chenillette. 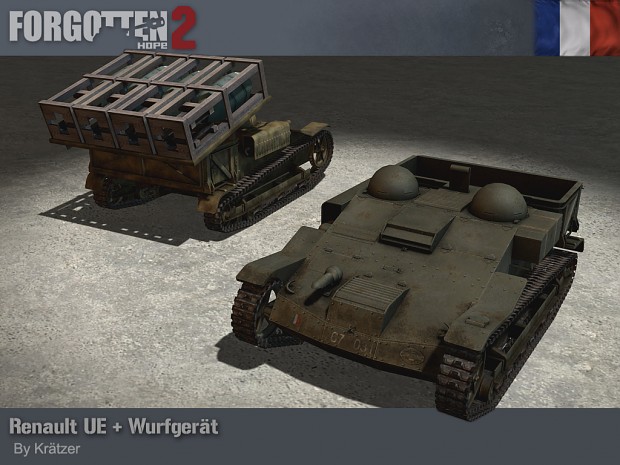 During the 1920's the French Infantry had decided to fully mechanise their formations, however there was not enough money in the budget to fully achieve this. One things that was decided upon was the need for a small armoured vehicle capable of carrying supplies to units under fire. A number of designs were submitted, and the submission from Renault was chosen in October 1931.

Loosely based on the Carden-Loyd Mark VI, the Renault UE was capable of carrying 350 kg of supplies in its rear basket, with a further 600 kg in the UK trailer. The basket could be tilted to more easily remove supplies. The vehicle was so low that armoured hoods had to be placed on top of the crew compartment to protect their heads. Communication between the commander and the driver was accomplished with a set of coloured lights.

Following the fall of France, the Germans captured about 3000 Renault UE and used many of them unmodified as tractors for smaller artillery pieces. Amongst other modifications, about 40 were modified to carry 4 Wurfrahmen 40 rockets. These were known as Selbstfahrlafette für 28/32 cm Wurfrahmen auf Infanterie-Schlepper UE(f). The frames that held the rockets were either mounted to the sides or on a platform fixed to the basket. Our Renault UE was made by Krätzer.

We see more and more French vehicles these days... can we hope for a battle of France pack someday in the future ?