Preview and news on the upcoming Alpha 1.1.0 patch, detailing the most changes since launch.

Hello all! It's been a while since the last proper update, mainly because Alpha 1.1.0 is massive. I'm going to break down the major changes in this news post, but there is a lot more stuff going into it as well. Probably the most important piece of information is that 1.1.0 will be launching at the end of this week. So if that was what you wanted to hear... you've heard it. Now, what's in it?

Probably the largest change is to the dungeon floor layouts. This is the first step toward a more interesting and logical generation system which I will be working on over the next few weeks. Instead of just rooms connected to each other by doors, floors now generate with blocks of rooms, single rooms, corridors, and mazes, as shown by a sample generated map below (rooms white, doors pink, corridors green): 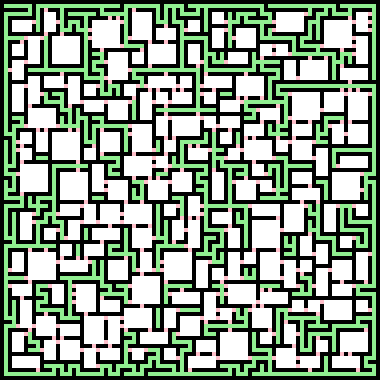 Since the overall floor generation has changed, changes have also been made to individual room generation. Rooms can now follow set layout types when being generated, which in future means specific room types can house specific enemy and item drops (a similar system already existed in the form of gold rooms, libraries, dining rooms etc, but the new system is much more efficient and flexible).

The next change/addition is to how potions and scrolls work. Sticking true to the original Rogue formula, all potions and scrolls now start out both randomized and unidentified, leaving the player to identify its use. This can be done either by using a Scroll of Identification (which initially, it is unlikely you will have a huge supply of) or by biting the bullet and using them. This can of course be very risky, as there are an equal number of good and bad effects, but once identified, you will know what that specific scroll or potion does for the rest of your current game. Once you die, all potion and scroll effects will be randomized again.

I will be adding to the number of potions and scrolls steadily each patch, and certain ones will be rarer than others. Health potions and Scrolls of Identification are more likely to be identified since they are more useful. You never know though. Since you will be needing scrolls and potions a lot more post 1.1.0, scrolls can now be crafted by using a bottle of Enchanted Ink on a sheet of Paper, and Empty Potion Bottles remain after the contents have been drunk. Alchemy remains the same, just with mushrooms corresponding to potion colour, as seen above.

A lot of Claustrophobia's graphics were made almost a year and a half ago now. The walls, for example, have had the same graphic since the very first PreAlpha version back at the start of 2012 (at that point the game had 1 item and a character that 9 times out of 10 went in the opposite direction when you clicked a cell). So I decided it was time to revisit a lot of the main tiles and give them a bit of a retexture. I've tried not to stray too far from the original graphics, while still giving them a much needed facelift. 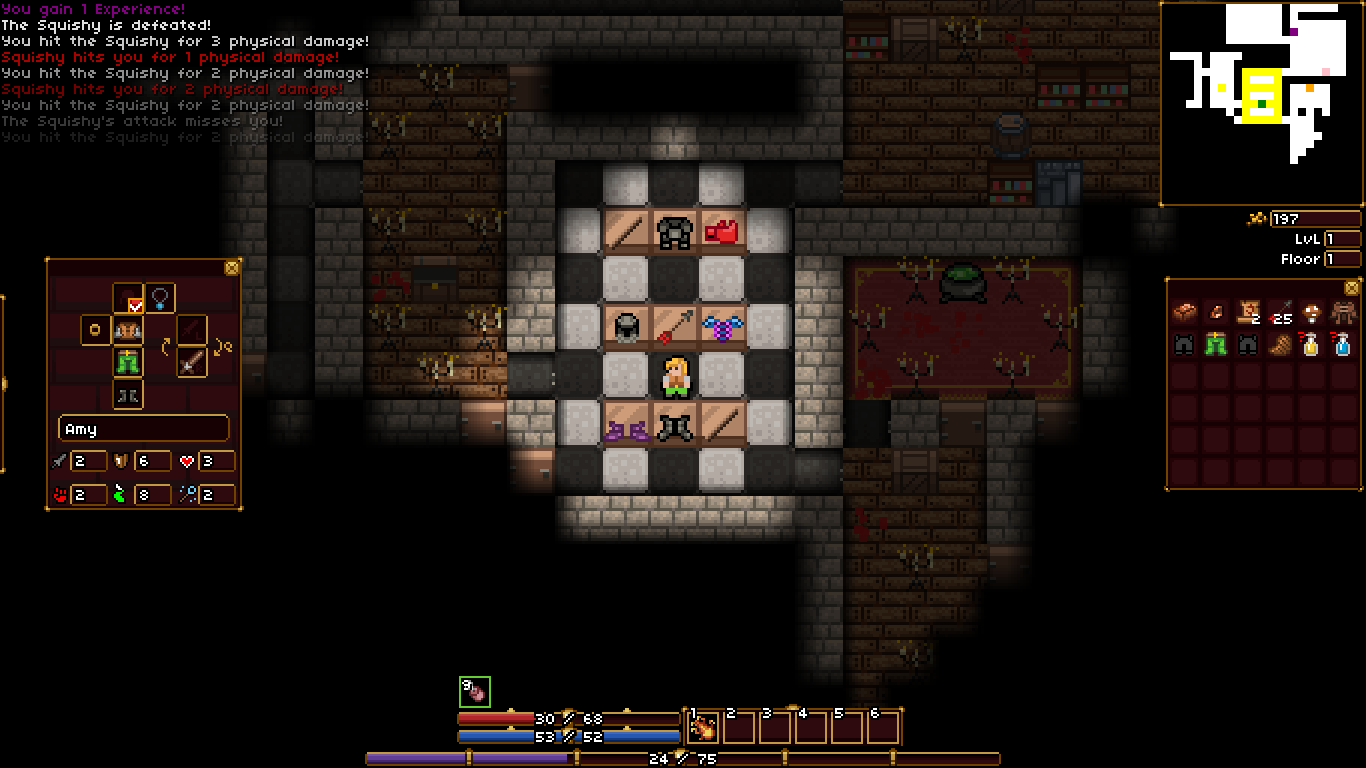 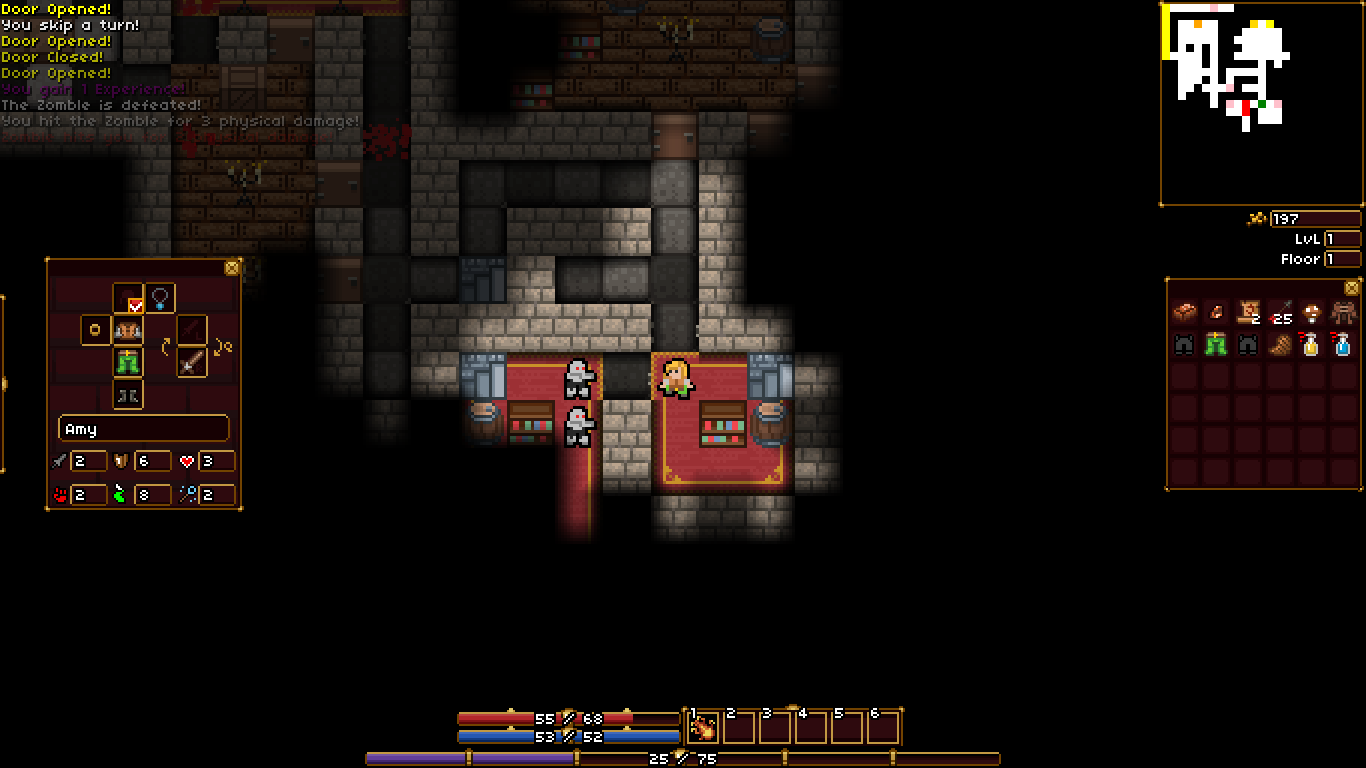 One of the largest problems in Claustrophobia currently is the way that enemies and items scale. For anyone who has reached level 20 and higher, it becomes apparently quite quickly that you are fighting a losing battle. Although you could say that in a roguelike that is kind of the point, the balance for high (and low really) level just wasn't there. Enemies would level up as soon as you did, which made leveling more a punishment than an achievement. The exponential increase in needed XP also meant that at high level it was impossible to get to the level needed to take on enemies.

Therefore enemies are now leveled based on the floor which you find them on, and reward XP based on the amount of experience needed to reach the next level, and the amount of enemies on that floor to dish that XP out. This makes leveling a much smoother experience, especially at high level.

The second change in terms of scaling is to do with both the gear you find, and how frequently you find it. Gear has been rescaled for a third time. The rarity of an item is now dictated by the amount of different stats on it, and the item level dictated by the amount of points in each stat. Shops will now sell much higher quality items, and have a preferance toward gear. Gear drops less frequently, with a higher chance to drop potions, scrolls, and crafting materials. Scrolls have a greater chance of dropping in libraries.

There's already a whole news post on this, so if you want more information on it, you can go check that out here.

Right, this one's kind of important. As I said at the top of this post, Alpha 1.1.0 will be launching at the end of this week. A couple of weeks after 1.1.0, updates and news will temporarily slow down for a month or so. This is because in a couple of month's time from now, I have a number of very important exams, which I really need to dedicate majority of my time to. My 'revision' at the moment consists of Physics and Mechanics books lying open around my keyboard, and unfortunately, I have not developed the power to absorb knowledge from around me.

I will still try hard to keep up to date with any messages/questions/suggestions/comments sent to me, and I will be working on Claustrophobia in any other time I have. There will just be less news and updates in that time. As soon as my exams are done, I'll be straight back to the normal update schedule.

Secondly, due to that changes to items and world generation, it is not advised that you continue a saved game into the new patch. While the save file will work, there may be some issues caused by items you were carrying pre patch, the level of enemies you have already encountered, and of course, floors which you have already visited. I don't say this often as I know how annoying it can be, but for the best game experience, I strongly suggest you start a new game for 1.1.0.

Whew. And that was the news. Time to go resolve some forces or something.
~TheIndieForge

I liik it , GoodJob!

Good Luck with the Exams & Don't worry REAL LIFE is more Important than ANY Game. So take your Time.

Nice, looking forward to it. Good luck with your exams!

Aside from the occasional wonky door layout and odd bookshelf-blocked corner I actually like the current dungeon generation. I trust that your changes are justified and actual improvements to the existing system, though.

I'm extremely anxious to get my hands on this update!

It will take a bit of balancing, but it will definately be an improvement in the long run. This system is much easier to work with in terms of programming.
~TheIndieForge

Really nice update!
Here are some ideas that I thought of during playing, feel free to pay me for my good work ;)
- Cooking, like soup or meat that give you buffs, like more attack power for 10 turns
- Questgiver NPC's, just guys that you find randomly in a dungeon and they ask you to kill some skeletons or something like that, and give you nice rewards
- Water and Lava tiles, so you could fish (this would work nicely with the cooking), and you can make a fishing hook with 2 strings and a plank

I did have one complaint about his version, I had it hard to see the health bar, normally I would see on how much life I was if I would just glance at it, but its hard to see in my opinion if you know what mean.

Thanks for your time!
Clotion

Hello! Quests are a planned feature, they'll be making an appearance in some form. Cooking and food in general is a feature I'm toying with for a hunger system (not too dramatic) that effects how quickly you regenerate health. Lava and water will also be added soon (its part of the new terrain generation) but I like the idea of fishing. I agree with health bar visibility, I'll get that cleaned up, maybe by only displaying values when you mouse over the bar.