A general outline for what we intend to do moving forward.

It's been just about over month since the first release of the mod, but we're not done yet. We said we'd release it at the end of the summer, and we did, but there's still more we want to do before we can call the project finished. My main modding computer went down about 3 days after release, and many of us have been settling into University so we haven't had much time so far, but things have been getting done. 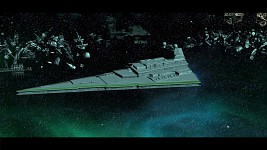 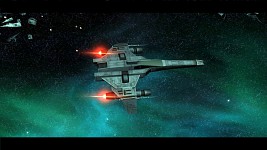 First, I'll address the major issues people have reported. These aren't the general bugs, which we fix as they get reported; these are the experience-changing kinds of issues that make people not want to play a mod:

1. AI
Some people have said it's too hard, but we're ignoring them and addressing the people who said it was too easy. They're correct. Due to a few changes that were made, the galactic AI is less aggressive than it should be, and focuses a lot more on attacking the non-playable factions than the player, and it also doesn't upgrade starbases as much as it should. We're working to address this, and think we've got it figured out. Expect a much greater challenge in the future for GC. In skirmish some people have reported that the AI builds mines in some games but not in others, which we are looking into.

2. Executor-class
The most common discussions we've seen are about the Executors either being too strong or too weak. We're happy with where it is, except increasing the health of each hardpoint by about 25% and reducing the shield strength by a small bit, so any changes we make to it will be minimal. If you can't kill it, you're pretty much just doing it wrong. 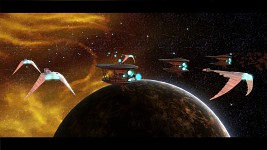 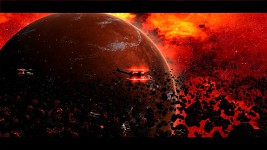 In addition to fixing the issues that people have reported, we also intend to add and change many other features of the mod, including:

1. New Planet Textures
If you pay attention to our forums or our Mod DB gallery, you will probably have seen the dozens of new high resolution planet skins Enceladus has been working on. He intends to make every planet in the mod as accurate and appealing as he can so you have something nice to look at while telling things to blow other things up. All of the new planet textures will be in patch 1.1. This also means that all of the Galactic Conquest maps will be re-done to feature the new planets as well as to fix some other details. Lower resolution versions of the new planet textures for the Galactic Conquest galaxy view will come in a later patch.

2. New and Improved Empire of the Hand Units and Structures.
Another long term goal is to make the Empire of the Hand more complete and visually appealing. Almost every ship is being remodeled or altered in some way. Their rosters for land and space are being increased, and they will get their own space stations and space defense platforms as well. Pictures will be posted as we go, so keep an eye on our Members Only forum, or our Mod DB gallery for those.

3. Improved Models and Skins
Many older models and skins are being redone to be either more accurate or just better looking. For example, the E-Wing ingame is being replaced by the one made by Dr. Nick for Freeworlds: Tides of War (one of our affiliates who we are sharing some resources with). There is also a new model for the Imperial Star Destroyer.

5. New Skirmish Maps
Enceladus has been taking the time to also add some new skirmish maps. At the moment he has created the Fiery Demise map. The number of new maps will depend on the amount of spare time he has to devote to creating new maps.

6. JLC has been working on improved descriptions for all units and heroes. These will hopefully help give a better idea of what each unit does. 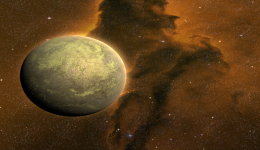 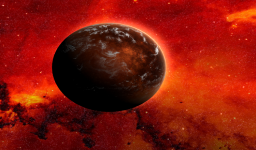 Finally, people have commented the lack of a campaign in the mod. This is something we're not too concerned about. If people have suggestions for making the GCs more story-driven, we may look into that, but don't hold out for a full campaign, because we probably won't do it.
-Corey

We are extremely happy to hear that you find the mod is bad and that adding over 100 new planet textures, redoing 2 units, adding 7 units, fixing the AI and other bugs and more is the equivalent of changing nothing. We look forward to more insightful and valuable feedback from you. Maybe next time you could even troll our next update in English (or if you insist in doing it in Portuguese you could at least have the common courtesy of fixing your spelling mistakes for an easier translation). Have a fun-tastic day!

well you did'nt add it did you everything except the destroyer

I think he means that google translator sucks balls, that he wasnt insulting the mod, and because of his mispelling it made the sentence translate funny? That's what it seems like he means, but anyway, good work guys, keep it up.

Keep up the good work guys.

I haven't found this mod to be particularly spectacular, but it's something new and of obvious high quality.

I can't wait for future releases! <3

Best of luck to the team, and the update looks neat. ^_^

I'm ripped to finally get a chance to use some New Republic warships, particulrly the Nebula and Republic SDs. And the visuals are astounding, i'm extremely impressed. Do you guys have any idea when patch 1.1 will be done, roughly, or is that just too soon to call?

I know at the bottom of Corey's message he mentioned that people were talking about a lack of campaign and story-driven elements. I don't know if this would be possible or not, but I know in the original Empire at War, there were a lot of sidequests already built into Galactic Conquest that you could take on. Usually it was just for extra cash or you'd be provided with some extra units if you succeeded, but I really liked the feature cus it gave players incentive to play more aggressively and I feel it was a feature that didn't get exploited enough in the original game. Just a thought.

It's too soon to know. A lot of stuff is finished, but there's still a lot that needs to be finished first. We didn't mention the biggest changes here because I intend to write another update about them when we know how much work is involved.

Hopefully we'll have it out some time before the end of November. It's a pretty huge file though.

Yeah, when i was playing the mod as the EotH. I built a infantry turret and it had no skin what so ever and was only destroyable by bombing run or bombardment.

There's a skin, but the specular is too high, so it's hard to notice. And I wasn't aware of its targeting issue, this will be corrected.

Sounds good. Right now it feels as if the EotH has to few units would really like to see more :D

What would be awesome is if you made more of the non playable factions playable or at least make their ships usable. Hapes Consortium and the Star Home FTW!!!!!!!!

i can't wait for the next version, where the AI will actually attack me!
one thing though: ackbar cannot retreat from a battle. when he does, he is listed as KIA.
hope you guys can fix it!
thanks