What each sub-group within the team has been working with during the first five-six weeks. Ideas, challenges and what to expect from our game.

Coming up with a game idea and then making it in 10 weeks has it challanges. For the designers, one of those challenges has been the effort of trying to combine stealth based survival with high paced gameplay. How to create a true “action-feel” without the use of player violence has been a constant problem to tackle throughout the level design process. Unlike most FPS games, Decoy doesn’t put you in the shoes of an action hero armed to the teeth. Maricruz carries only one item – a coward’s instrument – something to put a distance between her and danger as effectively as possible. 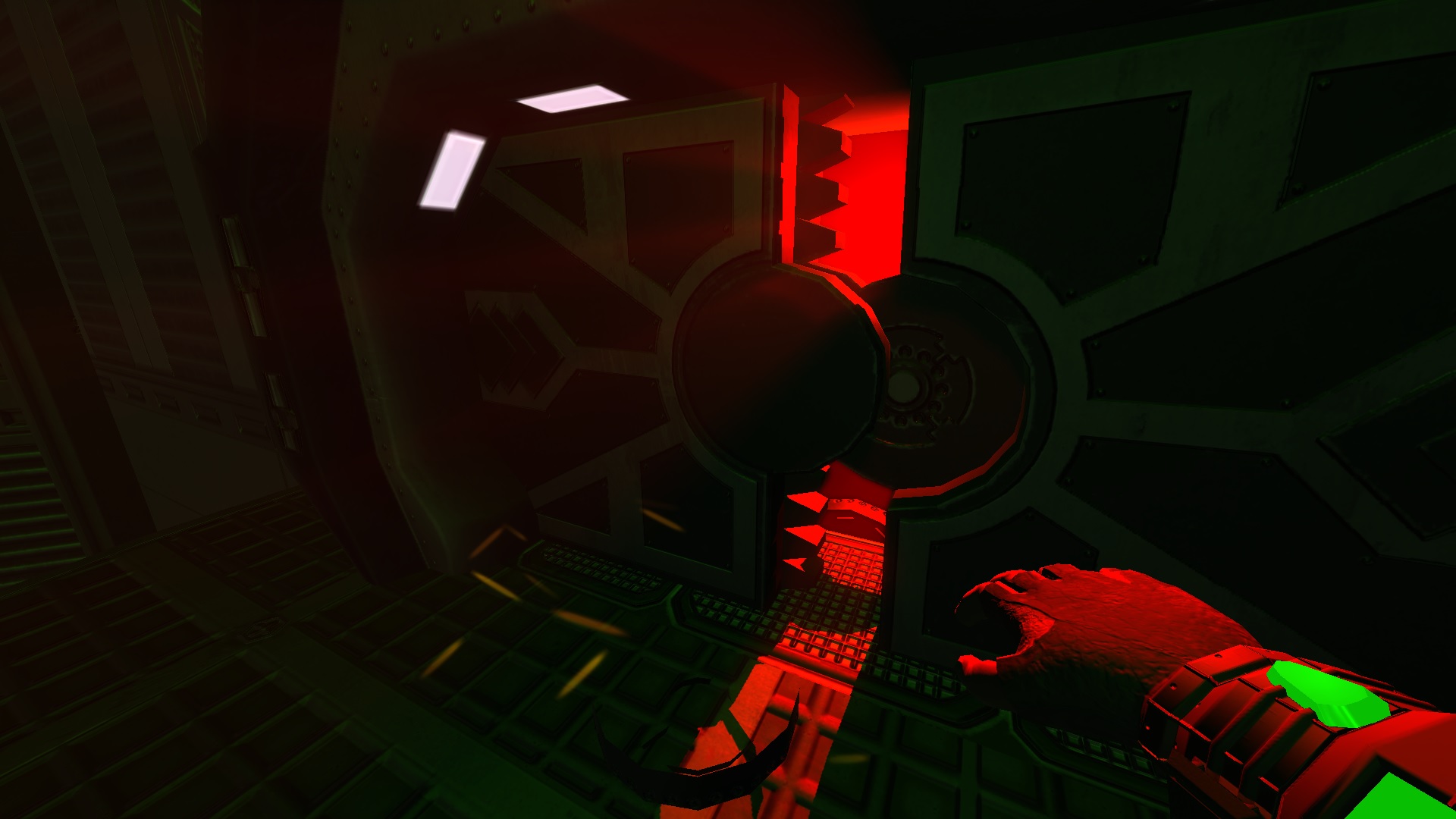 A dark, futuristic environment, pumping industrial techno and terrifying sound effects will only take you so far to create the pace appropriate for a hardcore action game. There must be a core of truly engaging gameplay to make the heart pump and sweat flow in the player’s seat.

Having people test the levels in their “greybox” stages is a way to see how well the design holds up. We noticed early that the dodging, the short-distance sprinting, impossible jumps and ‘panic-blinking’ were engaging enough to keep our test subjects at the edge of their seats, through death after death. So further designing of the game consisted of more of these moves. And more death, of course.

Just like a scene out of a World War II movie, Maricruz’s path takes her from cover to cover, trench to trench, and through many seemingly hopeless attempts at improvising herself out of danger. Guiding Maricruz through these deadly environments will get you used to the death animation soon enough, but at the end of the day, you will still feel like a hero as you stumble-blink past that turret that shot you dead one too many times. 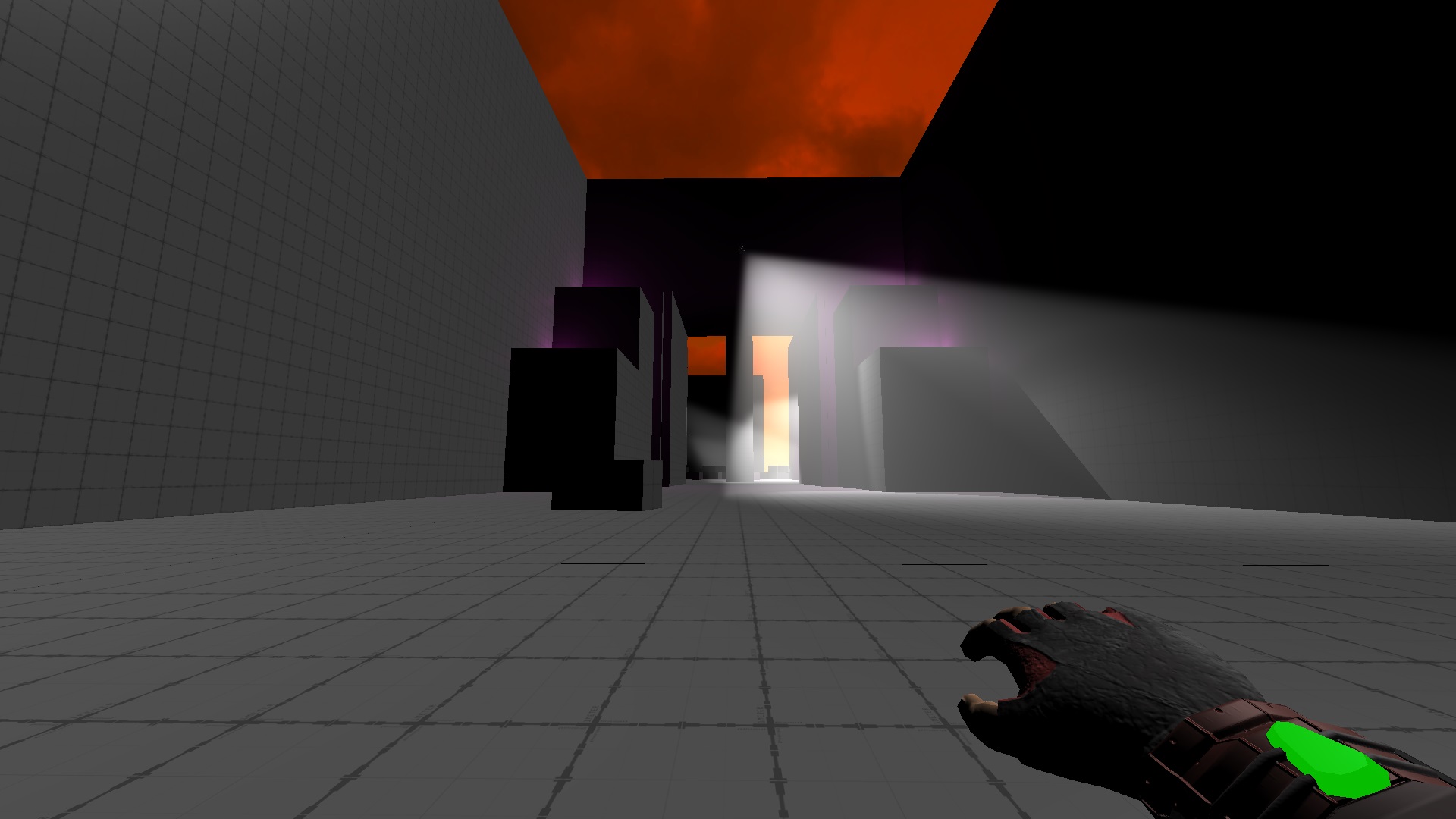 What sort of musical score can I expect?

The musicians started off looking at sources of inspiration and ended up with a theme - a solid base to build on. The next step was prototyping different music tracks to find what we were looking for more precisely. The overall sensation we wanted to convey was the cold atmosphere of Prospect Biotech’s test labs and other areas.

The initial idea of blending analog/’natural’ and digital instrumentation (mirroring the portmanteau of biology and technology) proved problematic, as the product became too reminiscent of Half-Life’s soundtrack. After feedback from the team, further iterations drew more on drum’n’bass influences and relied heavily on synthesizers to achieve a futuristic feel. Distorted guitar riffs and smattering percussion serve to urge the player on, keeping up the game’s pace.

We needed to compose ambient music, merging with the environment. The main part of the game was to include action sequences, each needing a different track, but all correlating both with the ambience tracks and the overall Decoy theme. The tools we used let us change parameters, varying the music dynamically with so-called ‘stems’. This also allows the music to transform based on the player's actions in different areas of the game, turning the soundtrack itself into a responsive medium.

Early work consisted of concepting the most important sound effects, such as the blink and turrets. Research on how to attain a unique sound design for objects in the game led us to lean away from the more typical turret and laser sounds. Instead we went for a darker fiction with more low-end sounds. The rotation sound of the turret, for example, is created with a kick drum reverb. In other words, it lacks an attack and only uses the tail. The foundation of the blink sound on the other hand is created using a jump rope, some wind, a bass drop and hell-a-lot-a-love. ALL the love. This is an oft-forgotten, but much-needed ingredient.

We started collecting and putting together point source ambiences, i.e. sounds from specific sources (such as a humming street light) rather than all around (like wind). 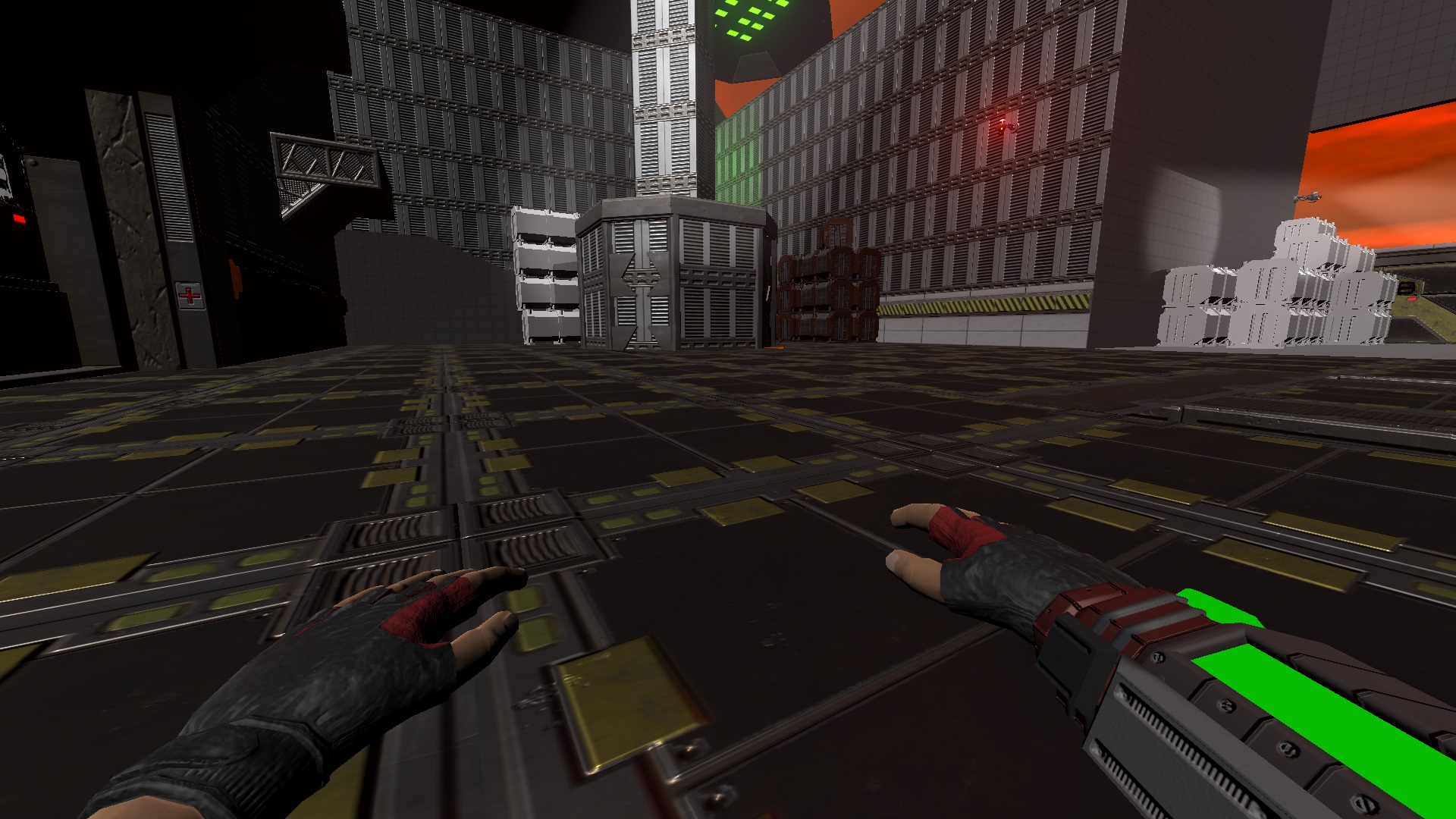 Recording and mixing all movement sounds was also done early on – footsteps excepted. Then comes implementation and testing; what if the effects sound fine by themselves, but not together? And do they match the animations? Then it was time for footsteps, once we knew who the player character was going to be. Finally, we started creating outdoor sounds. And always iteration – try it, realize how off it sounds in context, tweak it, repeat.

The focus of the programming team has been on the core mechanics and game feel.

As Decoy is a fast-paced and reaction-based game, much weight has been put on ironing out every bit of “clunkiness” from the game’s controls and features, through iteration and testing. Even though a feature is deemed completed, if it doesn’t feel right, we keep working on it. Create a feature -> Test -> Improve -> Repeat.

Visual feedback has also been a large focus of development. The player should to be able to feel and see his/her environment, even through vibrant lighting and particle effects coupled with distinct audio cues. This in turn requires a tight cooperation with our audio and graphics team.

The biggest challenge so far is the central mechanic - the teleport/decoy ability which has been constantly iterated on since we began working. Getting the player to stay out of the walls can be a real pain at times. Who knew?

It does, if we know what we are doing. To that end, research and concepting were a big focus in the early weeks. When there was an understanding between the whole team about how things should look, concepts were picked out to be worked into final versions. With concepts done, 3D models were created for the first section (which is an indoor lab and hangar-like area). 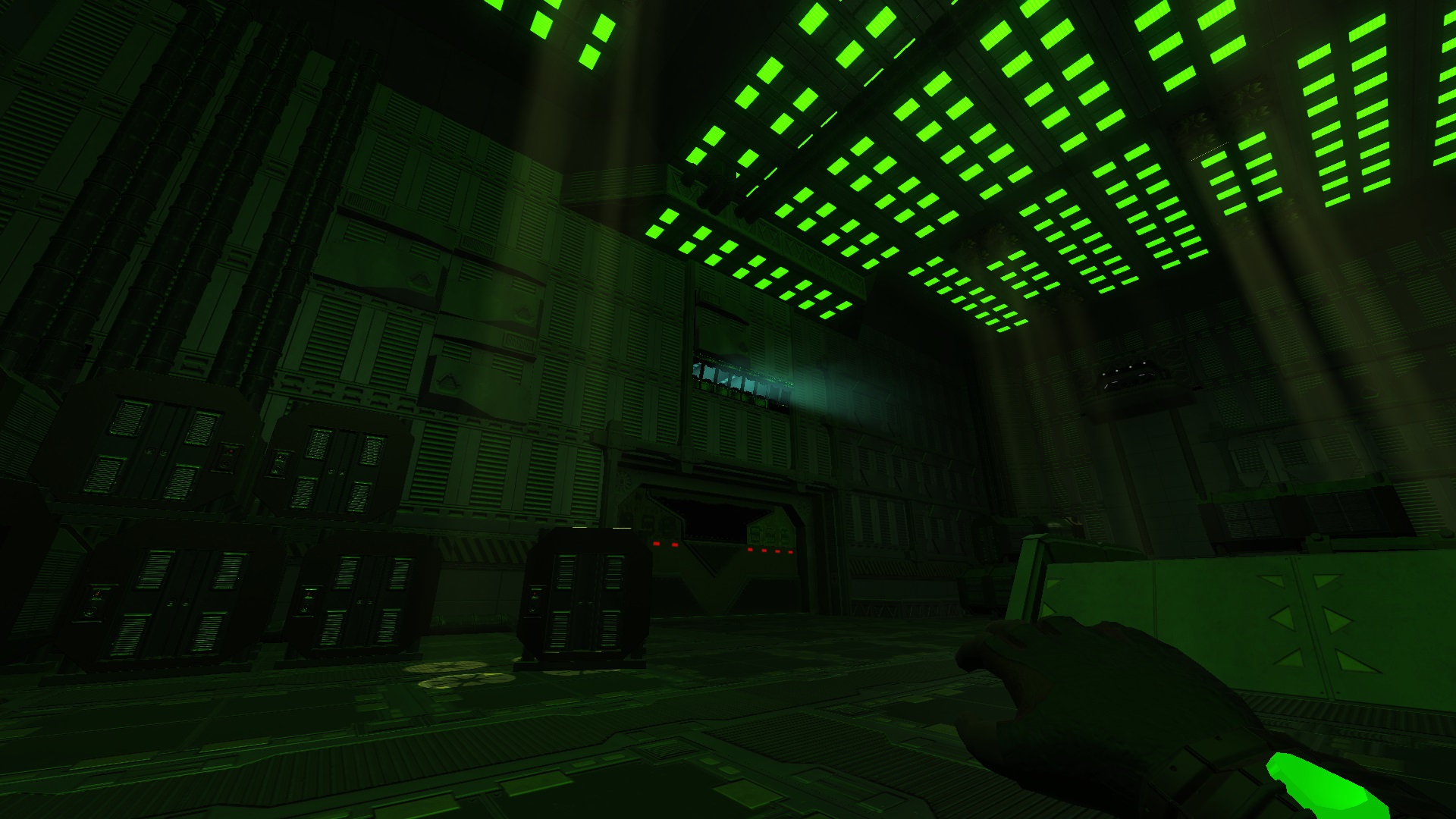 Textures were also added and we started on the character models. Our animators’ focus was on the main character’s hands; with the game being played in first-person view, the hands are the only part of the protagonist that is visible to the player.

For the blink device, ideas ranged from something Portal-esque to something less like a weapon and more like a glove; the latter is what stuck. It also needed to be designed such that it presents the player with visual information, since there will be no HUD in the game.

What’s the story, then?

We wondered this too. Being a game driven more by mechanical challenges and almost lacking space for a dramatic narrative, story decisions felt seemingly unimportant. Was there any reason our main character should be male or female? Where does the game take place? When, exactly? AND WHY?

Fortunately, our story and character came into being quite organically. A near-future setting was already a given, as was the industrial area, but the protagonist (female, 40-something, northern Mexican) grew out of a need to fit logically into the original game concept. Others came about quite by chance, e.g. the location (southern Arizona), which was a result of the artists wanting to create a desert environment.

Brainstorming ensued, clichés were weeded out, questions arose, were answered… and before we knew it, they took on the shape of a coherent narrative. Why was the factory abandoned? Because it was vandalized. By whom? Activists. Why would they do that? They opposed stem-cell based production of biological prosthetics. Bio-prostethics? Yes, it’s futuristic, it’s potentially contentious. Who would mind? People with extremely conservative Christian values – and that’s rare in a protagonist, which helps drive us toward originality. And that protagonist, who is she, what has she done, and how will I learn about her? Well, that piece of information we will save for another time.