Our coder Skjalg is working on a full blown visual logic editor for Unity and makes me eat my own words!

Davy Jones be my witness, I don’t like blog posts that begin with “It has been a while since my last update” typically followed by a long list of excuses. This is why I will skip that boring part and get right to the nitty gritty. Remember when I talked about our entity framework and how it totally does not have a user interface like Unreal Engine’s Kismet or Cryengine’s Flowgraph? Well, it’s time to eat my own words because Skjalg has been a busy beaver the past weeks. He has been
working on a new iteration of the framework which turns it into a full blown visual logic editor for Unity! Obviously this has all taken place in his freetime and the job isn’t done yet, but I’m finally allowed to show you a ‘work in progress’ screenshot: 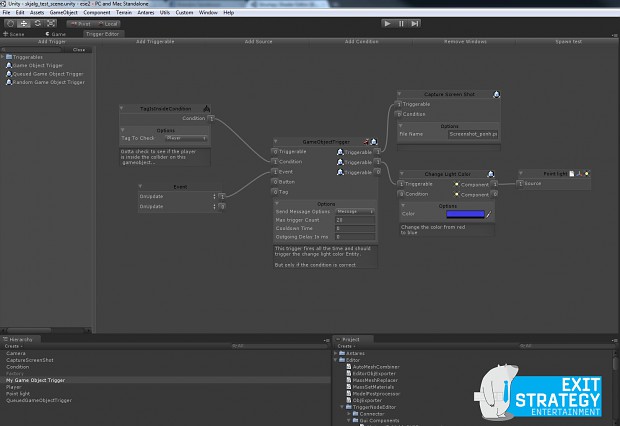 Nifty huh? This is going to make it so much easier for a designer to set up the gameplay logic for a level built with Unity. No need to type lines into a long script anymore! Maybe I can get Skjalg to record a video soon, too! :)

Will you guys be making this available to the rest of the community?

Most likely, yes. Possibly through the Unity Asset Store for a few bucks, to compensate for the many hours of work put into it.

When you say "a few bucks" do you mean:

First the tool has to be completed at least up to a releasable state before we set a price. However based upon the chat I had with Skjalg option 1 (REALLY a few bucks) seems to be closest to what he had in mind. We don't plan to get rich with such a tool and we want to share it with other Unity developers, but a little compensation would be nice. A " pay as much as you like" deal is theoretically also an option, but I don't think the Asset Store supports this.

A few bucks with a donate button on your site could work. This would certainly be worth it.

or only donate button with minimum donate amount of "REALLY few bucks", rest is up to users who donates. Mentioning donator names could work rise fund too.
Great job on this guys, seen it on forums too, can't wait

Ither way this is something unity is missing and if an engine let's people make things happen with visual logic it just becomes more user-friendly. Something like that would be better off integrated in the engine anyway. Good work guys every one that hates programing or just can't get it, with this he might have a chance to make a game in unity.

Looks interesting... What scale scripting is this for? Making events or defining how the game functions, like in this case as a platformer?

It is intended to be used for events in a level, but if people create new games with the level editor in "Little Big Planet" I wouldn't exclude the possibility to go beyond this with our editor! :D The original idea is to make the life of a level-designer easier though, not to make programming completely obsolete.