Time to disclose the Command Trees reserved for Ostheer!

This time we will disclose the Command Trees used by Ostheer. We had taken our time because the ones we had weren't final and we preferred to wait until the end to post them. Let's start then.

As the name implies, this command tree has several support units, on the LHS we have Brandenburgers, Aces High! and Carpet Bombing while the RHS is formed by Prioritized Resources, Ad-Hoc Detachment and Incendiary Rounds. 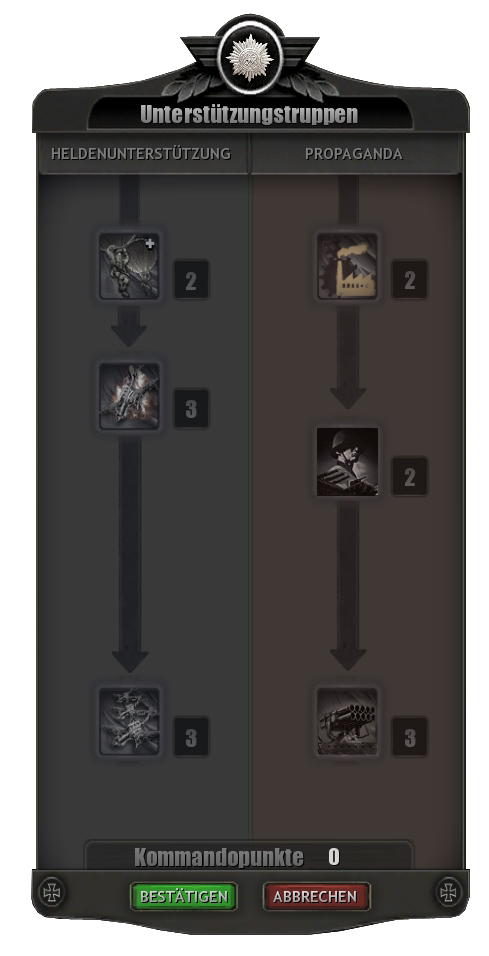 This tree gives your commander the best equipment the Fatherland can grant. LHS has as possible upgrades: Jagers, Panzerkrieg and Pincer Movement while the RHS has the following upgrades: Fire-Up, Ostkrieg and Sturmtiger/Brummbar. 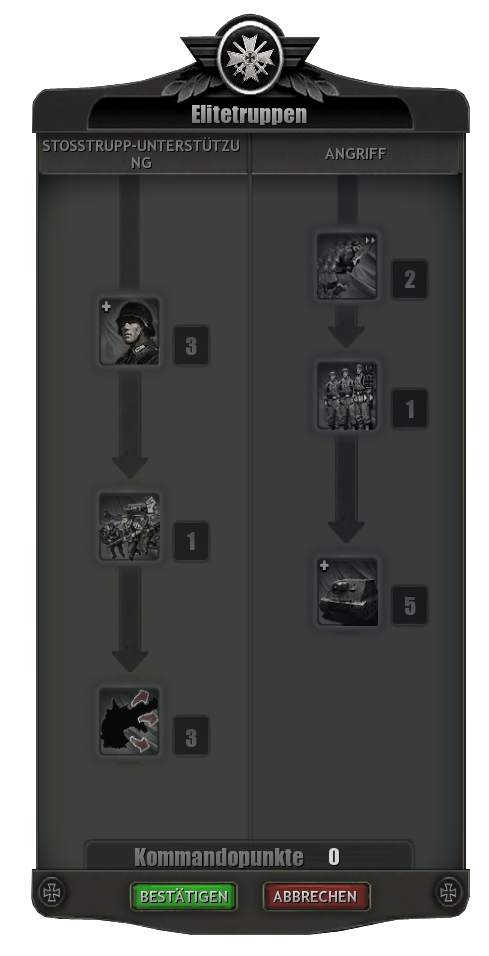 As the name implies, this command tree is a defensive oriented one, at the LHS and you will dispose of Panzernests, Cover Camo and the leFH18; RHS grants you Medic Stations, Counterattack and the Elefant. 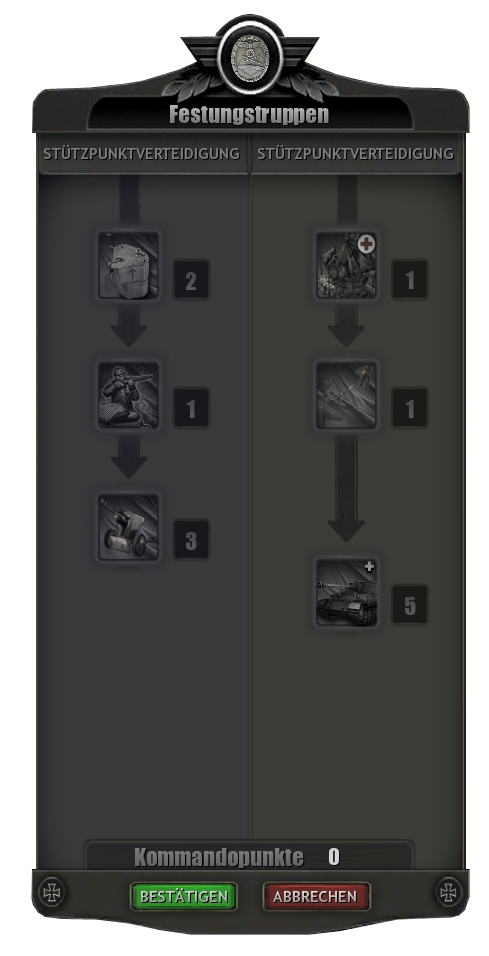 You can watch several Alpha matches from this site if you want to know more about how different the Beta version is going to be from the regular one. Remember soviets got some new toys and many changes.


Before finishing this announcement, you might be wondering what happened to the foreign units, because there is no mention about them and it was because we removed them from Ostheer, so we can make a reward faction featuring these non-german assets of war :). We had many of them than we thought it would be too much to put all of that there. Expect more news about it later ;).

We expect to start the Beta this Friday, so stay tuned ;)!

@willychong8921
Stay tuned! We will give Beta access to some additional Beta Testers later :).

great to see you blackbishop!
and good news!

Hey there blackbishop, It's goo to see you here again

Oh, Sturmtiger. The BK mod got tons of heat for attempting to put that in.

I'm not fan of the unit either, but it can fit in Company of Heroes, but not with realistic damage system IMO.

How will the panzernest perform? I'm always interested in new defenses. :)

And yes! Friday is a half-day in school. :D

I think it will be more-or-less like a vCoh Wehrmacht bunker sans to ablity to garrison troops there.

@Reborn Yes, you are correct. However there's that small difference that the Panzernest got a MG by default and doesn't require an upgrade like the Wehrmacht bunker.

YESSS, 38(t)s will tear and crush anything to bits with their 37mm guns and tracks of DOOOOOOM!
Also, looking foward to using the Foreign Support units!:D
Excellent job blackbishop!

AWESOME! With this stuff, you'll definitely win Mod of the Year!

And do you know how long is it gonna be between the beta and the full release? And is it too late to get access to the closed beta if we donate like...before friday?

Why does the Support Group's banner have a Soviet infantryman on it?

I'm also not a fan of Leibermuster camo on the guy in the banner of Fortress Army group. Sources conflict as to whether it was ever issued at all during the war. While it's ok, it's certainly not an "iconic" camo, and not one that people automatically identify with the germans. Would it be too late to recolour him in Sumpfmuster or Splittermuster?

Brandenburgers are specialized in undercover operations, and they use SOVIETS UNIFORMS.

Can't full Yankees and Tommies if they show up without a Soviet Faction!

This surely gonna win mod of the year 2013

@52x
Let's hope so :D! We need to make sure Ostheer is in good shape before releasing otherwise we would be out of business before the contest even starts XD.

Don't worry blackbishop. You will. Don't think that Eastern front is only your effort. We all gamers have a pray for it. It will. Just believe it will be the mod of the year 2013 and Develop it with your all ability. We all Have faith in you. We all will make it. Developers+Gamers makes a game fulfilled makes it win

@midgetdiver22
There is no reason to have a download link anywhere, the Beta is closed.

When we were asked we always confirmed it would be like that, either in the forums, in facebook or in moddb. Also, we never said that Ostheer would have an open beta.

Of course, once the Ostheer is bug free and balanced to an acceptable standard, then it'll be released to the public.

I see you guys have been busy!
this looks fantastic great work as always.

Is the beta open to anyone or did you have to apply?

It was open to those who donated $15 up till the 11th of March and dedicated community members. Now it's only open to those who are lucky enough to get a beta key, there's no real way to obtain one, we can give them away randomly or if you know somebody in the beta you can always ask them to request you a key.

Does any know when the ostheer mod will be released?