ORION: Prelude comes back for the holidays to show the very first ever gameplay footage! We have included brand new in-game screen shots from the recent internal game build. Oh yeah, we also have opened the Multiplayer Beta Registration - so go sign up!

We are back with an extremely exciting update – we are showing off the first gameplay footage of ORION: Prelude! We have been hard at work after the Technology Demonstration we had on display for London’s EuroGamer event – and we are ready to show it off. 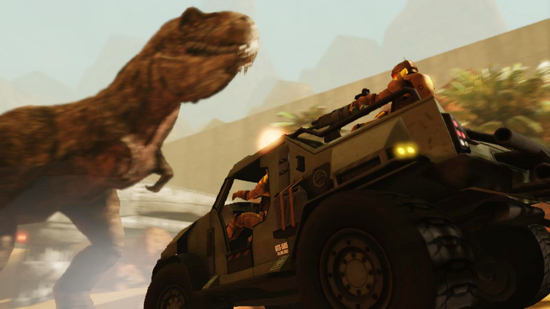 It’s been a long couple of weeks but this is something worth sharing. We’ve showcased it a bit here and there and the reactions have been extremely humbling. We are proud of what we have been cooking up and we are working hard to bring you the Multiplayer Beta in the earlier part of 2011 – which we will be talking about a little bit more in the later part of this post. 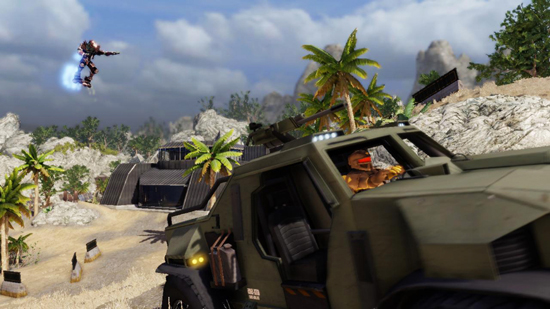 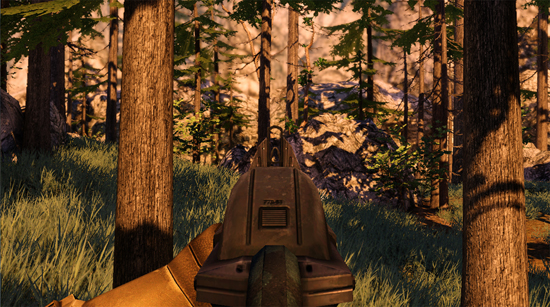 JETPACKS, BUGGIES AND DINOSAURS - OH MY!

We already have packed a wide variety of content and mechanics into the game. Right now Prelude already has more content and feature sets than what is in the latest public release of the Source Multiplayer Beta. This includes functioning Dinosaurs and vehicle combat and the newly re-invented jetpacks!

WEAPONS ARE A GO!

The weapons system is also back – with complete functionality already. This includes the stance-based mechanics that were featured in the Source Beta, the iron and zoom functions, the detailed damage tables and a whole bunch more. We are constantly updating this and maintaining that strong tight control that we showcased in the Source Beta. 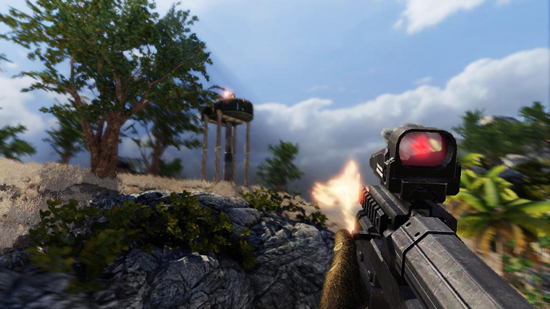 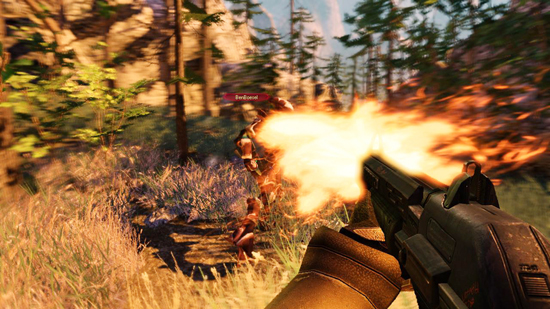 However, before viewing, we would like to remind you fans and gamers of a few very important facts:
01 - This game build is still pre-alpha.
02 - This game build was created in 6 weeks.
03 - It is using a TON of placeholder content from the Source Multiplayer Beta, including:
weapons, characters, arm models, and a few other things.
04 - The T-Rex is an old model using only 10 game animations mixed with motion layer blending systems. The final T-Rex in the shipped game will feature just over 200 game animations.
05 - It is already extremely fun!

Here is a nice little two-minute montage that we threw together from a day of testing this last Sunday. Enjoy!

Yes that is right! We have just opened up registration for the ORION: Prelude PC Multiplayer Beta. We are going to be unleashing this beta in the earlier part of 2011 and we are currently taking applications. It is a simple 5-step process that can literally be done in 30 seconds. 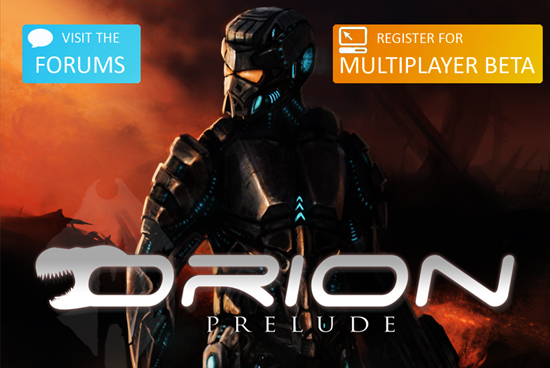 Applications are handled through the brand new Spiral Community. To apply for this Multiplayer Beta, simply head over to www.orionprelude.com and click on the shiny orange button that says “Register for Multiplayer Beta”. This will pop up an in-screen window using the new Spiral Community and let you register an account. After filling in the spaces provided, you will be sent an email. Simply activate your account and you are automatically registered for the ORION: Prelude Multiplayer Beta.

HOW TO GET IN?

This selection process will be a manual selection process. There are a few ways to increase your chances of getting in – and that is simply by interaction. Think of this in the same way during election season, where all those annoying Senators and Chief-of-Police wannabe’s put up signs and posters all over your town at every single intersection. They do this simply to get their names burned into your brains. The more you see it, the more you’ll remember it. This will work for you at the Spiral Community. The more we see you there, the more we will remember your name during that selection process. Interaction will be key.

If you were a beta tester previously for the ORION: Source Multiplayer Beta – you are automatically included in this when it rolls out. We appreciate your interest and support in the earlier stages when we were around – and this is our thanks to you. You guys rock.

If you liked what you have seen in the first gameplay footage – then you will be even happier. You guys will be getting a much more polished and focused build including all of the new content. This includes:
-The new character models
-The new weapon models
-The new T-Rex (and probably a 2nd dinosaur as well)
-More vehicles
-More maps!

A COMPARISON - JUST FOR YOU

We threw together this comparison for you guys. On the Left is what our build looks like - using the old Altair Warrior from the Source Beta. On the Right is what you guys get in the PC Multiplayer Beta. Re-designed and all bedazzled - just for you. You can expect these levels of changes for all placeholder content.

We hope you enjoy. We look forward to seeing some of your faces in the new Community and we look even more forward to owning you guys on the ORION battlegrounds!

Have a safe and happy holiday.

In ORION: Prelude, will you ever explain the war between the Altairs and Carriers? Awesome faction names by the way :D

In the next installment. ;)

mmm can i ask someting about that iron sight system? it just moves the weapon to the center via a anim and makes it more precise or its a more complex system?

amazing! but you're releasing on the consoles? the PC community understands that this is loosely based on halo and still see innovation but the console "community" may not be as tolerant and see this as a total rip-off of halo, so will this affect the price you set on the game? because many will question; "why would I buy this when I can buy halo".

Free DLC, Multiple Modes of Co-Op, Mechs, Dinosaurs, Faster-paced gameplay, and better graphics than Halo for $14.99 - shouldn't be too painful for most people.

I like Reach's screen space mo-blur more than UDK's :P
That's about it.

Speaking of which, I was reading on digital foundry that the smb in Halo 3 (and coincidentally all ue3 games) is based around a square shape. In Reach and ODST (and, from what I've seen, all source games) it's based around a circle and looks a hell of a lot better.

Is there a way to alter UDK's screen motion blur so that it uses a circle?

I really have no idea if I'm describing this correctly. I'm mostly asking because it's a question that's been bugging me since I read the interview and this was the closest window.

I know what you mean. We used a circle-space for the Source Multiplayer Beta.

Much of what you see here is VERY early. We just wanted to say happy holidays ;)

Halo looks better than this. Sorry.

Halo is made by a huge company, this is not.

So what? HE was the one that said this looked better than Halo. I'm just saying he's wrong. I didn't just say it for no reason.

Are you blind? This beats Halo's graphics ten fold, you're just so blinded by your fanboyism that you don't see it. Stop taking game comparing so personally.

While the visuals are better (already) at this point, we still have many months of development to get it on par with where we want.

Halo has strong suits that other devs have yet to match (particles specifically), but as a whole this has a lot more potential graphically.

It looks really unprofessional when a dev says that his game is better than another game, in any way.

Don't look at the connection in it's history as being a mod that was inspired by halo, then look at what it is now, do you still notice any trace of Halo at all? I don't see much at all.

when you see the updated Trex with all 200 animations, (like throwing you against a wall, tipping over cars and such), all 6 updated character designs ingame, unique colorful environments (most levels are just for testing purposes), and MORE, the only connection left to Halo will be that it is a FPS-- hard to diverge from that connection :)

"the only connection left to Halo will be that it is a FPS-- hard to diverge from that connection :)"

Brilliant stuff guys - I will be signing up if we have enough time to be playing it whilst we are dev'ing ourselves.

I gotta admit, that jump to UDK concerned me, but with what you've shown so far, it seems like the right choice, with the improved support of vehicles, as well as a generally more flexible engine.

I can't register, my email is already in use but when i try to recover lost password it says no password with that email exist :S

What email service are you registering under?

I'll see if I can manually activate it for you.

Does it take a while to receive an activation key for registering as a new user? I have not recieved mine yet.

Make sure to check your 'SPAM' folder.

If it's not there - just let me know the email address you registered under and I'll see if I can manually activate it for you.

will check for it now then

You should be good to go. I manually activated roughly 300 forum accounts two days ago :x

Lol sounds like they are asking us to spam the forum x)
but anyway, having a diffucult name will not help you get into beta :3

Yikes! Please don't SPAM our forums. In fact today was pretty crazy - might have to hire some moderators!

And yes, having a difficult name will make it less likely - as it's a manual process - meaning I have to type your names in :)

Oh, and I forgot to mention this before, but I gotta say, you guys over there have made one of the best gun mechanics I've ever used, as I recall playing the Source Beta, it was just absolutely awesome, the guns felt great when using them, oh, and I think it's just me, but when I used any gun, it felt like it was completely lag free, and that I could hit any target despite the fast movements, unlike other games. :P

Anywho, looking forward to the Beta!

I do not even want to tell you how long I spent on each variable. The system was intense and overwhelming but COMPLETELY worth it. Takes tons of testing but you can rest assured I won't sleep until I get it right with Prelude either. And I'll say this - it'll be even better :)

I can't tell if this is a positive or negative comment.. :P

I believe it's positive because he said, "I WAS skeptical" ;)

I REGISTERED! orion is amazing!

i'd like to ask something, the dinosaurs in-game are controlled by player or they're npcs?

For ORION: Prelude - the dinosaurs are NPC-based.

awwww man.i cant even Register :( it says... You have exceeded the maximum number of registration attempts for this session. Please try again later.? i answered the Question..i said T-Rex, is there something im missing...can someoone please help me Register :) i really want to play the Beta :(