The Old Republic Era expansion to Sins of a Galactic Empire is being worked on; we're not dead yet, but we need your help!

I hope everyone has had a nice long, relaxing six months break since the last time we posted a news update! I know that it’s been awhile since there’s been any official mention of how our SWTOR/KOTOR mod is progressing, so I figured that it’s time for us to give our first news release!

I’m sure the question on everyone’s mind is “when is this expansion going to come out?" The truth is, honestly I have no idea on a timeframe. Personally, I would like to say “as soon as possible” but the fact remains that we only have a very small number of people working on our team to get this project done. And while I’m eternally grateful to the members of our team who have dedicated such an amazing amount of time and effort to this expansion already, I have to say that it’s only a small handful of us who are working on this project and we can only work so hard, and so fast to produce a quality expansion to Sins of a Galactic Empire.

We need help in all the forms we can get. From people who can model, rig, and texture to people who just want to playtest and throw around some ideas for tech and ship balance: we need your help. Right now we have a very dedicated small group of people who have an overwhelming amount on their plates, but if you guys could lend us a hand or two in any way that you can, you would help us move forward much faster. Even if you think you can’t do something, but just want to help, we will find you a place. If you think you can donate any time or talent please shoot me a message, or leave a comment and I will respond to you ASAP. We welcome any individuals who would like to be part of our team.

So, if there’s any other way I could possibly convince you guys for help by begging, let me know! Haha. We are all excited for this expansion, and we want to deliver a quality expansion to Sins of a Galactic Empire and not a half-baked, half-assed product.

With that business out of the way I’ll share with you where we are currently at: our foundation point. I’d say that, overall, we’ve finished with our foundation for the expansion. We’ve decided on what ships we want to use, and have 95% of them currently implemented and working. We have a rough fleshed out idea of what we would like each faction’s tech focuses to be, along with the role their ships will play. We are cutting music from KOTOR 1 and 2 and SWTOR to be used, as well as trying to find relevant voices from the games to be used as the interaction and confirmation voices on our ships. We are working on making sure the textures/skins, models, and scales of ships are as vibrant and referentially correct as they can possible be (an example of what I mean is take the picture of our Thranta model, we are trying to ensure that it will look closer to its SWTOR reference point than what it is now.) 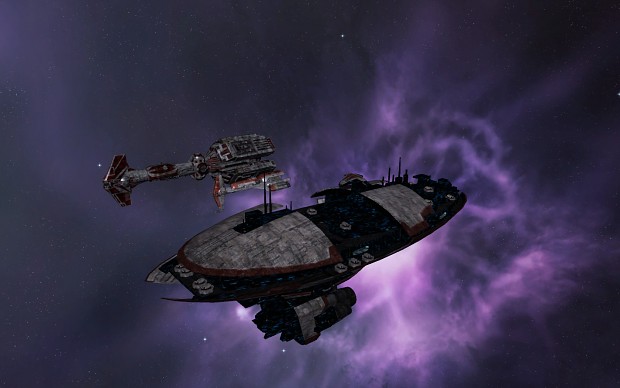 I’m sure one question you have is about titans: will they be available? Possibly. The reality is that it is hard for us to find a comparative titan for the Sith Empire and Old Republic. There are a number of ways we could go with this: using existing ship models and giving them command Heroes (ie. Using our Interdictor model but calling it the Leviathan, using the Centurion and calling it the Ravager, etc.). We are open to any ideas. If you have some ships you think would make good titans, let me know. Send me a message, or post a comment and I’ll get back to you. 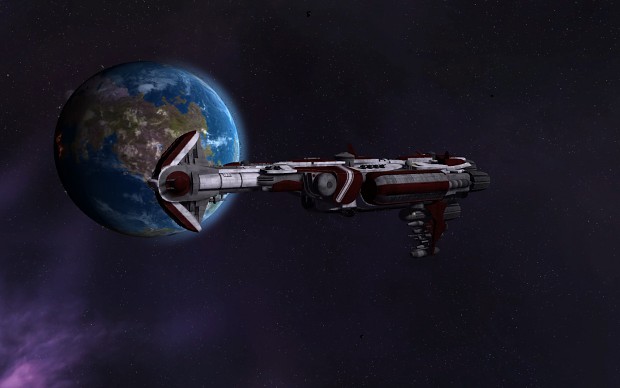 Now, with all of that wall of text being said and now out of the way, I’m sorry to say that I only have one little bite-sized new picture to give to you guys of one of the Empire’s new capital ships: the BSX-5 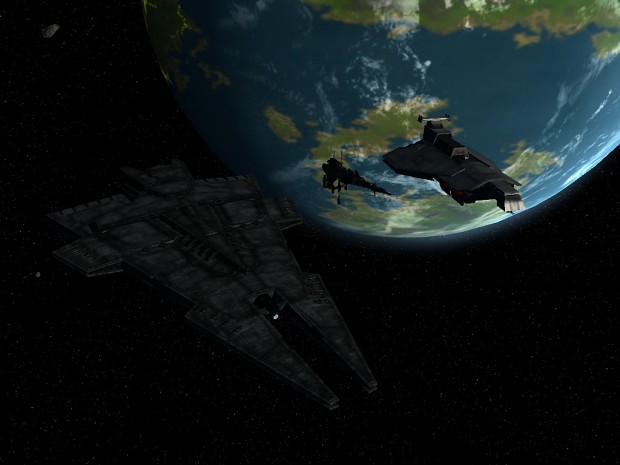 Remember, we need your help. If you want your thoughts and ideas heard on what direction you'd like to see this mod go we are giving you a seat at the table, you just have to participate.

Thanks! Ideally, we'd like to keep everyone informed as often as possible, I'll try to have new updates every month (unless there's not much to announce...) until it is released.

If you guys could use stuff from Old Republic at War, this would make a fantastic Sith Titan/Dreadnought

Great news, looking forward to it. As for the titans for the Sith Empire, you could simply make a Harrower-class Dreadnought a normal top-of-the-line capital ship, and make the one with the "super-canon" as a titan (with an ability "Use the Main Canon" to destroy any capital ships with a single shot- we've seen in SWTOR that those super-lasers were capable of destroying literary entire fleets with a single shot). More than that, except the Harrower I, you could implement the Harrower II class ships as well, which had a much larger range than it's predecessor, but less anti-fighter armament, and MUCH less fighters (the one with no "hole" at the front- I believe that guys from ORAW have made it into their mod, with a GRATE model, so possibly you could ask them to use it, if you'd like).

In SWTOR wasn't there a "pride of the Republic" (not sure about the name) Dreadnought esque ship the Republic used?

IIRC, Pride of the Republic is a Mandator class. As someone commented below, there /is/ the Star of Coruscant but all we get to see are various broken bits of it, and it's hard to construct an idea of what it would look like. :(

There was a Star of Coruscant but we never really see what she looks like. Just the wreckage on Hoth.

Thanks! I should have messaged you a link to our Dev forums and my steam ID. :D

I'll message you a link to our developer forum and my steam ID. :)

If it wouldn't be to much trouble, And because i have way too much time on my hands id love to beta test this for you, give you ideas and such!

I'd totally be willing to playtest anything you can throw at me.

how about the Inexpugnable class command ship? Starwars.wikia.com

I can confirm to you that they're part of the Old Republic's capital roster.

I wouldn't mind being given stuff to help out with the mod. I mean, I have next to no talent but I like to see things reach their full potential, that counts for something, right?

I'll message you a link to the Developer forums, if you sign up for it we'll mask you and you can download it.

is there any chance these WIP version of SoGE could be uploaded here? call it "version XXXXXXX testing beta"

Likely not. I want to keep it amongst the team of our testers until it's approved, and stable enough to go public on version 1.0. Maybe in the future if we get a decent halfway point we can release a teaser-mod.

main problem with that mod is the economy, hope it will be fixed in the expansion.

Likely not, as it is based on SOGE's system.

Hi there, been looking forward to this expansion for ages!

Got a suggestion you might have already had, but why not use The Silencer as the Sith Empire Titan? (Its a brand new ship weapon that the Sith Inquisitor basically finishes that can wipe out fleets)
Info: Starwars.wikia.com and a video: Youtu.be

For the Republic, the Allusis was meant to be the brand new top of the range Republic Warship, granted its just an advanced Valor class cruiser but other than Hammer Station I cant really think of anything for Rep side.
Info: Starwars.wikia.com

EDIT: I would not mind helping however I can, which sadly is not much as I cannot code, model or texture. I'm good at Testing though I suppose, especially if you want me to test the "Turtle-bility" of either race :D

Or could use the Gauntlet for the empire, which can shoot ships in hyperspace!

True but not practical for Sins. Can't have ships target ships still mid-jump.

I'm down to beta Test this, this seems like the most performance stable mods so far and I wanna see how it'll impact my system. That and a I have a huge want to play the Old Republic.

Some examples of Mandalorian ships may also be seen within the Jango Fett: Open Seasons comics.

Here is an idea for a titan for the Sith Empire the Undying Starwars.wikia.com it is a massive Sith warship of unknown power so it just seems to fit what you where looking for.

I'd like to contribute somehow, I always have a lot of ideas and I'm always tweaking my own game to reflect them - I'd be excited for the opportunity to be able to share some of them, especially with this mod.

I'm not a modder and don't really know much beyond the very basics, but I'm hoping I can help you guys out somehow.

If there's anything I can do, please let me know how to get started.

i would really love to beta test! I love sins, and i love starwars, my favorite thing about any starwars game is seeing a fleet of imperial ships drop from hyperspace and just destroy everything!

I love the base mod and am a huge fan KOTOR and that time period, so i would love to help. I don't have any experience with any sort of game/graphic art, but would be more than happy to help playtest the expansion.

Haven't checked on this in a while, but this seems pretty good!

Great mod, well-done guys! it would be great if there was a chance to test this expansion

The balance of this mod amuses me. The corvettes are stronger than the cruisers (and larger).

is there any update on the mod?