Today we show off a new AP mine for the Italians and exploding bullets for Eastern Front snipers.

Today we are showing off a render of another Italian explosive and some information on some new tools for some of our sniper kits on Eastern Front maps. 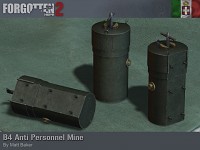 The B4 landmine is the first anti-personnel mine designed for the Italian Army. Designed in 1935, it saw extensive use by the Italians during the war, though it would prove costly and would ultimately be replaced by simpler models.

The B4 is designed to be fixed above ground to a stake or tree and be detonated via tripwire. The cylindrical casing includes a flat area with 6 sharp spikes that could be pushed into a tree trunk. The internal explosive chamber was surrounded by metal fragments, that would be thrown in all directions upon detonation. The B4 was occasionally buried. Ours was made by Matt Baker.

The German B-Patrone and the Soviet PZ were standard rifle calibre explosive bullets intended to be used for range setting of machineguns. Such projectiles had been prohibited by the Declaration of St Petersburg in 1868 for use against men, but they were in common use by snipers on both sides of the Eastern Front. In February 1945, German snipers were even officially issued 20 bullets each for use on the Eastern Front only.

Absolutely devastating in use, these bullets were used in situations where an absolutely certain kill was needed.

Will we ever get a ARMIR map or faction?