Office Complex feels different than the early builds, it looks different. Which should be expected, but that doesn't take away the feeling. I'll see if I can scrape up something new or pretty to show you soon, though I won't promise anything. Office Complex, 2013

Oh, boy. This is gonna be a long as heck post.

Office Complex has evolved. Like, a lot. Starting as a practice map, then a map pack, and now a team of three people turning it into a full mod. Okay, you already knew that last part, at least. You don't however, know the internals. If you don't care about that then you can move on and I'll leave you with the simple sentence, "The mod's not dead." But for the rest of you, feel free to read on. I'll warn you though that it's mostly me rambling about how this project came to be and has changed over the year it's been worked on. An OC history lesson, I guess you could say.

So in January I'd been thinking a lot about that cool mod Black Mesa. Anyone heard of it? Heh. I'd also checked out Half-Life: Source again and realized how little it was worth the extra money considering I already had the GoldSrc version. Now, I know that the point was mostly to show how simple porting GoldSrc to Source was, but it was still a bit of a let down, and the graphical clashes were... silly.

I'd kicked around the idea of doing my own Half-Life conversion pack but not crappy (and also free!), so one day I booted up ye ol' Hammer and got to work on it. Starting with Apprehension was a terrible idea in hindsight. So I picked Office Complex. Honestly, honestly I picked it not because it was my favorite chapter but because it's the simplest to do. My goal was practice at the time, anyway.

Once I had something presentable (or at least, what I thought was at the time. Now I'm quite embarrassed, actually) I ended up working on some basic textures and started up a ModDB page for it. Up until this point I was wanting a small map pack with some textures to go along with it. Please myself and the part of the community that wanted Half-Life in Source, but done a little better and not overhauling everything. 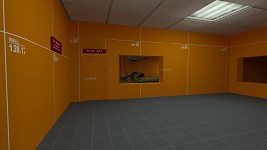 Looking for a modeler I scrapped everything I had done at that point. New maps, new textures. It was all crap. Our modeler John joined and shortly after our programmer BoX. We'd all worked sort of in "solitude," as in we worked on our stuff without really showing the others what we'd done. They did their thing while I went to redoing everything.

Some weeks later I get the entire chapter's maps up to a playable(ish) state. At this point BoX, John and I start showing our work to each other, and I suddenly am embarrassed. BoX works quick as heck on our (V)GUI, NPCs and some models and John's models look very nice. Meanwhile my mapping is pretty sub par. BoX also ponies up a neat texture which looks unorthodox nexts to my silly amateur texture. At this point John and I had imagined we'd be ready for a December release (This was back in August, I think). NOPE. I reboot my stuff again! 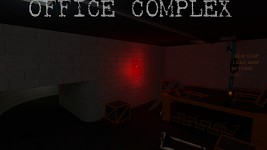 This time I take some more liberties with my map design. Until then I'd stuck very very close to the original map design and layouts. I decide to change that this time. Nothing major, but I definitely wanted to make some changes. So I'd begun work yet again on rebuilding, and slowly my motivation dissipates. I neglect to contact BoX, John disappears (his friend passed away) and I just don't want to work on the mod anymore. I think my personal obligation to finish is the reason I didn't close the mod page and delete the files right there. A months or so passes, Black Mesa comes out, and I get busy on another project. 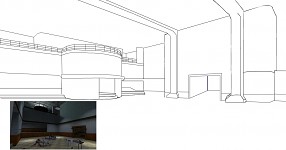 Here's a concept I toyed with. Not too different, right?

Here it's December. 4 months since I touched Office Complex for extensive work, but so much more work on another project. That means I got better, and looking at the files I last worked on, I'm embarrassed. It's like I'm having that feeling where when every two years you look back at yourself and realize you were an idiot, only I'm experiencing that every few weeks.

And now here we are! February 2013, one year after the mod's inception, and currently the best iteration of the mod! You know those screenshots I've posted over the last year? Yeah, all of that's gone. Models aside, pretty much everything you've seen has or will be replaced by something of higher quality. I'm genuinely happy with the current files. They may be a tad less than playable, but they're so much better to look at and work with.

Office Complex is so different. It feels different than the early builds, it looks different. Which should be expected, but that doesn't take away the feeling. I'll see if I can scrape up something new or pretty to show you soon, though I won't promise anything. Nonetheless, I'm surprised at how much different the project is now as to what it was even 3 months ago. And I hope to be getting lots of feedback soon so we don't have to coast and can keep going up that hill of quality. Office Complex this summer, anyone? Can't promise, but I have my bets.

As long as you're growing and improving.. don't think there's anything wrong with that.
What you can do is still release small bits so others can see you grow too :P The feedback will help you more, me thinks, besides what you and you alone think of your work.

There's always room for improvement but that don't mean you should wait to reach your peak and then decide to start releasing stuff. And looks isn't everything hehe

If you do get a summer release, then at least you have something released.
Maybe you could release one small section of a map as a demo sooner, maybe the bit you think is the best.

You could breeze through the entire chapter in under 10 minutes, I think. Hardly enough rooom for a demo. Also makes me ashamed to say this has taken a whole year. I'm too lazy for this.

Been following this mod for a while and it's nice to hear from the developer, looking forward to a release! I always liked the bit where you jump into the lift/elevator shaft onto the service ladder. Keep up the work!