Now that I've finished my work on both Russia and Styx my next step for Off Limits was to look into the view model weapons and finalize them as best as I can before we release our first beta to the public.

First of all thanks for voting us into the top 100, here's me hoping we make it to the next tier!

Now that I've finished my work on both Russia and Styx my next step for Off Limits was to look into the view model weapons and finalize them as best as I can before we release our first beta to the public. I looked into an issue we've had for a very long time last year but was never giving the time to finish it. Basically our weapons were always very dark and in some cases even close to black. When you aimed up however the view models did light up, as shown on the image below.

About two years ago (or has it been three?) I went over the weapon materials and hacked it by using "$selfillum" and adjusting the textures brightness. This however wasn't a real fix, but a bad hack. On the left hand side of the image below you can see how they were for the past few years, where you clearly see the arms and weapon not having a proper light source on them. After a long search and numerous discussions trying to figure out what the hell was causing this I eventually found the issue which was adding "$illumposition" in the .qc file. The right hand image below shows you how they will look upon release, now with a "phong" shader instead of "$selfillum". 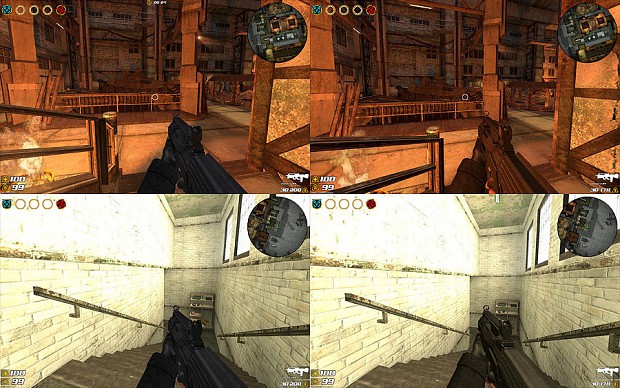 With this fixed I also started looking into fixing small animation glitches in our view model weapons, where an arm goes ballistic or one animation doesn't quite line up nicely with the next. For this I went over all our animation files, cleaning them up so that I could make quick adjustments and export them again without much hassle. Having a clean work flow is very important, it makes fixing and updating stuff much more efficient. By doing these cleanups I already found a number of weapons that didn't use an idle or sprint animation. Holes in certain weapon meshes that could be seen while sprinting (for the trained eye). Image below shows a file before and after cleanup. Now I can simply "select all" and "export" each file and recompile it directly making bug fixes super easy, which was a bit of a mess in the past and caused for our weapons to have many small bugs as a result and no one wanting to fix them.

Last but not least while I'm on the weapon subject, here are renders of the weapons to be included in Off Limits. These are the lower detailed models used for the world models. When I've finished the view model updates I will move on to putting these ingame.

I'm spending each waking hour as of late to get this thing out the door, which should be soon now. I've told myself not to enter 2011 without this mod being released and I still plan to keep that promise to myself. Maarten has set up a playtesting server for our soon to be released open beta and he will also start his final code polish period as of next week.

I'm glad to see that you're making sure everything is perfect, I can't wait to play it!

The arsenal looks awesome and I'm liking the way they're looking in game now, great work.

Top quality work as always! Keep it up! Can't wait to play this.

This will be one awesome winter!

In terms of weapons choice the only thing that bothers me is the MP5, the Rogues are supposed to be like a guerrilla, right? Or at least they are the ones with the more cheaper tech. The MP5 looks to be even better then the UMP since it even has a silencer. Its just an opinion since there is no point of going back just to change the weapon.

Rogues have an MP5SD, the Vanguard weapon is based off a concept that HK made years ago with a UMP style stock and some other changes. Details on said concept weapon here :
Hkpro.com

Holy sh**!
Now December 24 is a real awesome date for me, it's almost like Christmas then!

Let me play it now T_T
It looks so damn good, and I miss a good multiplayer mod ._.

Take your time, don't rush it out too soon. Even though it will be a beta it will be still judged by some as if it was the final version. It is better to wait until 2011 for a great mod than rush to release it in 2010 and it be an average one.

Aye, you only get that first impression once.

You guys have definitely earned my vote ;D