McKay: „John, wait a moment! Can you spare me just a minute?“ Sheppard: „OK, but only a minute? McKay: „Um well, I´ve been working the database trying to decrypt the Ancients old logs.“

McKay: „John, wait a moment! Can you spare me just a minute?“
Sheppard: „OK, but only a minute?
McKay: „Um well, I´ve been working the database trying to decrypt the Ancients old logs.“
Sheppard: „And what did you figure out about the latest logs? Will we be able to set eyes on this ominous ship finally?“
McKay: „No, this entry is well protected. Not even my granny could penetrate these codes.“
Sheppard: „Um, the minute is over. See ya, Rodney.“
McKay: „Hey, hey, wait a moment. There is still more to come, John.“
Sheppard: „What is it else, Rodney?“
McKay: „There are some Wraith ships we didnt knew about. However this has a little "side effect".“
Sheppard: „Oh, how interesting. And what could this be?“
McKay: „Unfortunately my latest attempt on the encryption seemed to be a bit too "aggressive". I was able to restore 2 of the 3 unit logs preserved, however the rest stored inside is beyond recall.“
Sheppard: „Great, simly great Rodney. At best you leave the database and stick to your other tasks.“
McKay: „All right, as if I didn't have enough to do.“
Sheppard: „As this is clarified, hand me the 2 logs. I'll have a look on the 3rd one later.“

This ship is equipped with specialised Artillery weaponry to attack hostile vessels even from a great distance. Its shape is similar to a Devilfish. The organic hull isn't very durable, but able to regenerate any damage very quick. Also the Artillery ship is capable of dispatching a Scout squad to gain recon on a designated area in order to better track hostile targets from the distance. 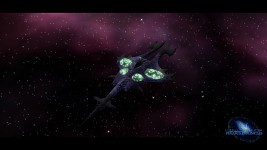 The Heavy Bombers are more powerful variants of their precursor including a different but similar shape. Its bomb- and its pay-load were increased as well as the armor was enforced. Also a Small Plasma Cannon is used to intercept fighters. These optimisations resulted in the Lantians strenghtened resistance against the earlier bomber. As of now the Heavy Bombers are capable of doing serious damage to other ships and their systems even if small in numbers.

Also we have a nice new video for you:

Happy halloween!
&
See you next month!