It’s already a year since I’m start making this mod, so I will tell you the story behind the mod making in this one year, also the future of this mod.

It’s already a year since I’m start making this mod, so I will tell you the story behind the mod making in this one year, also the future of this mod.

Since it's a quite long article, I just quote what I've posted somewhere else and you can go to the actual page to read the details. They are separated into two articles, click the "Read more!" to see the real articles.

A Year of Development

June 2008. Learning from mistakes I did in my first mod (called Project:Prototype), I’m starting make another mod for ZH after I joined at DeeZire forum. Unlike the first mod that just put random things (major influence from Contra), this new mod intended on fixing current bugs that occurs in ZH v1.04. But later I found someone already makes a balance mod (I’ll not tell the mod name, but it’s a quite popular mod) but I found it destroy some balances instead making it more balanced, so I found this mod another objective: Refine Game Balances. I watched many game replays, listen players (either n00bs or Pros) comments and opinions, then examine the problem. If I found that problem is a critical issue and need to be rebalanced, then I surely make the fix.

August 2008. I first release this little mod on DeeZire. On that time this mod just enable Boss General as new playable faction, and apply some bug fixes that reported at "Coding Mistakes and Useless Things in INIs by EA" thread in DeeZire forum, also major fix for the popular Scud Bug. Since at the time DeeZire forum a little dying, just around 5 members still active in the forum (I found only Redemption, beng, Yayo01, CommieDog, BlueGalactic, and me), only a few people that know this mod.

Is there any special event for the official 1st anniversary of this mod? If yes, like what?
Yes, there will be a special treatment for this mod first birthday. I’ve planned to release a special content on the next year, what the content is still a secret until next month. And if possible, I will announce NProject Mod mini-tournament held by GRANS Studios. If you interested, you can join the tournament. 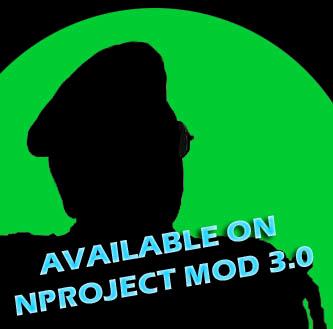 What is NProject Mod 3.0?
NProject Mod 3.0 (NPM 3.0) is the next level of NPM installment. Because it’s no longer fits with the early target of this mod (fixes and balances with some new units and features), sort of an expansion pack for NPM.
In this mod version you will find two more generals, one of them is shown above. There also game modes, more additional features, and much more new units. Also, in this mod version, General Leang will also have several changes so she will be no longer an unholy faction but a China faction.
For a little spoiler, there are some things that I’ve made but not released until now can be found in the "_test new units" map, like GLA Airfield, Tomahawk Storm, etc. Those "secret" stuffs will be released in NPM 3.0!

hah i loved playing around with that map, checking out who did what, and what you've done :D

but you still didn't know the concept of the new generals ;)

how about General Ironside?