Hello community, welcome to our November news. This time without Mckay and Sheppard although much content for all Tau'ri, Goa'uld and Wraith lovers among yourselves. Thus: Something for (nearly) everyone. ;)

Hello community,
welcome to our November news.
This time without Mckay and Sheppard although much content for all Tau'ri, Goa'uld and Wraith lovers among yourselves.
Thus: Something for (nearly) everyone. ;) 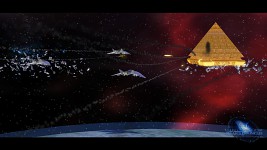 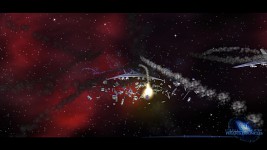 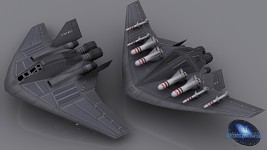 The HB-302 is the Tau'ris new empowered Bomber version. Its shape is pointy and looks similar to the terrestrial stealth bombers. Also the HB-302 is of bigger size than the B-302 and is capable of loading much more rockets and bombs. Those are enforced with Naquadah and afflict much more damage to hostile shields and hull armor than their precursors. However the HB-302 is much less maneuverable compared to the B-302 due to its high payload.

Another one is the Experimental Ha'tak which had been designed originally as the Goa'uld artillery unit but was replaced later by the Apophis Prototype Ha'tak due to its exotic design. However we liked the design too much to dump it, so this Ha'tak version will appear in our mod as a Experimental Ha'tak.
(Render, In-game, In-game)
(Credits: Model& Texture: MerlinGalgotta) 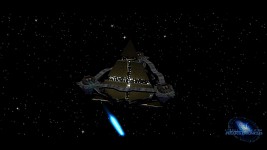 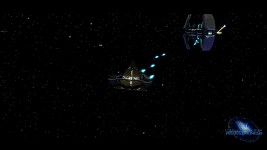 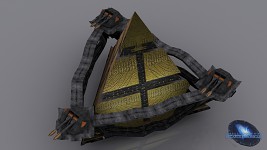 This specialized Ha'tak is capable of attacking hostiles from a great distance due to its 3 powerful Artillery Cannons mounted on the outer rims edges. The new weaponry contains Ion projectiles which are used to drain hostile shields and incapacitate the enemy temporary. Also the Experimental Hat'taks shields as well as its engines have been improved significantly. 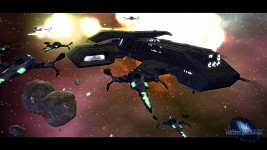 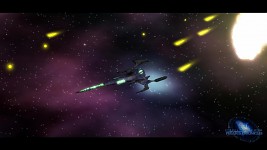 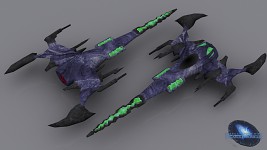 After several losses against the Lantians the Wraith developed a new kind of fighter with special features and special weapons. Equipped with double-barreled Plasma Guns, some small bombs and an Ion Cannon the jagged shaped Experimental Dart poses a serious threat. Also the hull is coated with a new resistant composite material.

Please keep up your great support for us on the MOTY-award and continue to vote!

And no, these news aren't the announced "big thing". ;)


Until the next month

And no, these news aren't the announced "big thing". ;)


lol, that good to read, i love that bomber and it looks great in game too

awsome love the hb-302 and the hatak

Love it :) also I don't get why people complain about the HB-302's name (haven't seen any complaints here, yet, luckily)

No offense to whoever writes them, but i find this post without the "character dialogue" much more appealing as far as updates go.

In other words, great update, thanks!

Brill mod for for first game (except i couldnt get the AI to do much) can't wait for the FOC mod to come out keep up the good work.

I'm going to wait and wait untill this game is ready to be launched :D

Looks awesome! I have one question though. Will you be including Destiny in the Tauri faction? I think it would be a nice add to the heroes. Great job guys! Keep it up!

Will the Supergates still be there and if they are will they be changed?