Last month we showed off what the new guys were making and they've continued making progress, with the MG34 and MP40 currently in their capable hands. Once they (they being Jenn0_Bing and Rick_D) have done those, then all that's left is the Enfield and a few minor tweaks to the K98 and Bren's. Yes I did say Bren's as in multiple...

Cpt. Ukulele has also been hard at work with the never ending requests of prop models following on from his assault on the door handles. We've also had some fantastic help from some voice actors so you'll be belting out orders in British, German, Canadian and Polish! We'd love for some more German voice actors to get in touch though.

Playtesting is coming on well with everyone having fun during the tests which is a great plus, peoples niggles have either been fixed or they've accepted the fact you have to play this game differently to DoD:S. It's nice to see players say once the mod is released they will be playing this over DoD. A real motivator!

This months media comes in the flavour of a couple of videos showcasing two maps, Archery and Gold.

First up is Gold, set behind the beach and incorporates both open field combat with close quarters urban combat. It's a huge map that makes other Source engine maps feel inadequate and as such has 6 sets of advancing spawns for the teams as they advance across the map. Here is a small taster of one of the objectives, a small town:

Apologies for the lower quality than usual, had to record this from my secondary PC which wasn't up to HD recording!

The Axis really didn't want to give that one up and were heavily entrenched in every nook and cranny. Next up is a shorter feature on Archery, based around the Operation of the same name. British Commando forces assaulted a collection of objectives in Norway early on in the war and this map reflects just one of these operations. For more info check out this Youtube link for a report from the times.

Lastly a couple of screenshots from the revised version of Radar_PP. The push pull variation is almost perfectly equal, despite a non symmetrical layout. It really does require teamwork to break the other team as for the last 5 matches on it it has been tied after 10 minutes of playing and gone down to sudden death to settle the score. 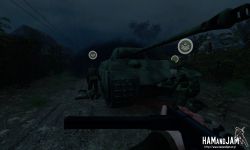 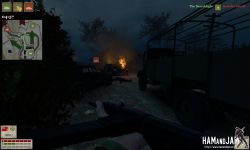 And some unfortunate news to add at the end, next month we'll be out on the streets with our charity tins trying to drum up next years financial support. We were amazed by the generosity of people this year and hope to have a repeat of it this year, we're even going to throw in some rewards for those who donate. So hold fire donating for now and wait to see what we can offer.

More news as always, next month.

True story, it's looking pretty good. Sorry to hear about your financial issues I may throw in something when you announce more details.

Looks great, my only complaint perhaps is the running speed seems a bit too fast. But it's looking great none the less. Hope it'll have a large fanbase on release.

Overall its looking good, hopefuly you guys can get some more money.

In the first video where the player gets shot at the start, was he killed by the German running across the road or from somewhere else?

There was a prone MG34 by the running players feet. You can just about make out the muzzle flash before death.

Oh yep I see him.

Okay, i' ve seen the vids and read the text. But all that i see in them, is grenadespam und the player dying. I gues this mod would be cooler if you had an more objective focused gamestyle, than just capture point a,b,c...

I'll admit that these videos did have a disproportionate amount of grenade spam in them, just so happens that the clips I had were of a test where people used grenades a lot!

Not sure what you mean by more objective focused game style as at the end of the day all gameplay types boil down to capturing points. There are plenty more gameplay modes in the works such as Destroy where you have to blow stuff up to complete objectives.

Looks awesome. Reminds me off DOD mixed with Cod 2. You should of made this a dod mod instead of doing everything in hl2.

what. This is a Source mod, not a HL2 mod as such. if you own DOD:S you can play this anyway