The big news is that Nomad Fleet has been greenlit but I also want to show you the new features and fixes that I'm adding to the Alpha version.

After 20 days full of anxiety, Nomad Fleet is finally greenlit. Of course, the process itself is not as hard as it used to be and my game was included in a very big batch of greenlit projects but I got to say that after this I feel pretty happy, not only the development is going pretty smooth but I can know for certain that the game will have a good and popular platform supporting it.
Now, there's some new issues that I need to solve: company, taxing and banking. I'm not an american citizen so I'll probably ask a government agency of my country to help me solve these problems.
I feel confident though, this is the last phase and I believe my hard work will be finally rewarded. 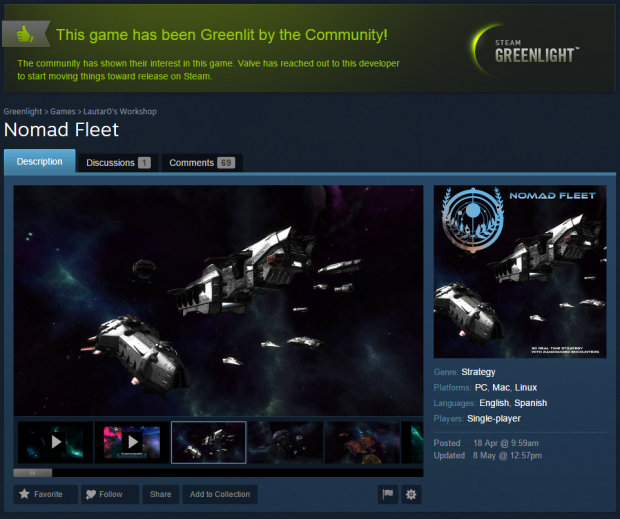 I have reached "Alpha", what does that mean? well, Alpha is a term that has lost meaning because everyone is using it differently but I can tell you that for me is having a game that can be played from begining to end. To be specific, I can say that almost all core features (combat, building, resource collection, dialogues, AI, etc) are ready and only need polishing. Currently I'm starting work in the plot elements of the game, the first one is the intro of the game (check the video below to see an early version), adding to that I'm starting to write the first logs and planning the first ending animation.

Why not Beta you may ask? well, for the moment there's little content so the game becomes pretty repetitive soon, that's something that I expect to fix during the next 2-3 months and at that moment I'll feel ready to release the game in Early Access with a Beta version.

Why Early Access? well, not only the game could benefit from the feedback of the gamer community (working alone is like being in an echo chamber sometimes) but there's some final core features that I would like to add to the game in order to reach most of its potential, for example: buildable upgrades for the ships (have a capital ship weak against bombers? then add a missile launcher to it) and unlockable fleets (finished the game? try this other fleet based on the Xenos ships or try this "Combat Mothership" based on the pirate factions).
Also I intend to keep adding encounters, ships and technology to the game. A project like this one depends on adding as much content as possible.

Thanks for reading and thanks a lot for your support!