News Update #12: Fire Support - Hello and welcome to another update of Traction Wars. This month we have the Bren Mk.II & British Bandage by [TWDEV] Brrr as well as the M24 Stielhandgranate by [TWDEV] Sir Apple.

Hello and welcome to another update of Traction Wars. This month we have the Bren Mk.II & British Bandage by [TWDEV] Brrr as well as the M24 Stielhandgranate by [TWDEV] Sir Apple.

For this update there are several changes to the team list. Firstly we must congratulate [TWDEV] Sir Apple on his appointment to Lead Artist and [TWDEV] maniche on his appointment as Lead Mapper. We also welcome a few new faces on the team with the arrival of teaandcigarettes and Rockbr34k who join [TWDEV] maniche on "Sword Team". VonMudra also joins us in our Research Department. The team is looking for new developers to join, so if you think you have a skill we could use, please fill out a recruitment form here. We are especially looking for Mappers, Animators, Riggers & Coders although we are recruiting in all areas.

The Bren was a light, man portable machinegun, issued at a rate of one per squad, providing needed firepower to the British riflemen, who would never receive an issue semi-automatic rifle during the war. Originally based on the Czech ZB26 light machine gun, the Bren was rechambered to British .303 cartridges, creating the trademark top feeding banana clip. The Bren was highly accurate, quick loading, and deadly in the right hands. However, its small magazine capacity crippled the ability to lay down the heavy fire that was capable of the German army's counterpart, the MG34 and MG42 light machine guns. Despite the fault, the Bren, in updated forms, loyally served with the British army right into the 1980s, with some even being used during Operation Desert Storm in 1991. 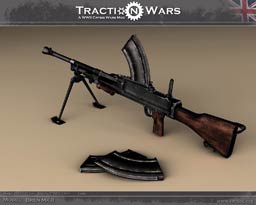 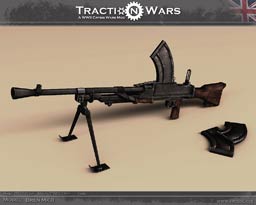 The German M24 Stielhandgranate was a continuation of the stick grenade concept first begun during World War 1. The stick gave leverage to the thrower, so, while bulkier, it could be thrown far longer distances then the normal ball and egg shaped hand grenades, as well as the stick offering added shrapnel. German assault tactics dating to the Great War involved a heavy focus on the offensive power of hand grenades. Thus, instead of being designed to kill the enemy with metal shrapnel, it was designed as a concussion grenade, putting out little shrapnel but with a huge explosion which would either kill the enemy outright or stun him long enough to be killed by the assaulting troops at point blank range. So in a sense, the German stick grenades acted as the first flash bang grenades, allowing German soldiers to quite literally jump into the enemy position just as the grenade went off. 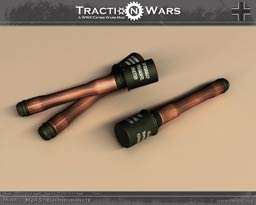 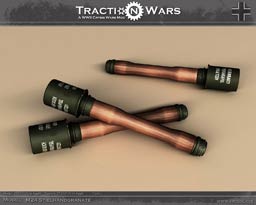 One of the most important pieces of gear in a soldier's life was not his weapons, canteen, or even boots. Instead, it was the personal bandage that almost every soldier would be issued during the war. If he was wounded in action, he would be able to preform on the spot treatment if possible, before a medic could attend to his wounds. Here we see the British version of the issue bandage, a design which differs little from the bandages of other countries. 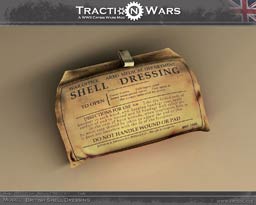 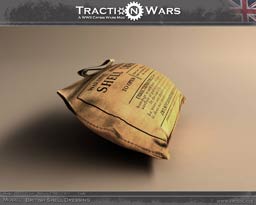 That's all for this update, see you again next time. Until then be sure to check out our community forums and comment on news, post suggestions and become part of our rapidly growing community.

Frostbite wouldn't be suitable for a realism mod such as Traction Wars. CryEngine2 is still the most powerful out there and offers us everything we need.