News Update #11: Bouncing Betty - Hello and welcome to another update of Traction Wars. This month we have the Walther P38 by [TWDEV] Sir Apple as well as the S-Mine & Mills Bomb by [TWDEV] Brrr.

Hello and welcome to another update of Traction Wars. This month we have the Walther P38 by [TWDEV] Sir Apple as well as the S-Mine & Mills Bomb by [TWDEV] Brrr.

The P38 was produced by the German arms factory Walther. Designed in 1938 it entered service in 1939. On the technical front the P38 was a revolutionary pistol as it was the first that was lock-breeched that used a double-action trigger. It used the standard German 9x19mm Parabellum round also used in the Luger and the MP40. The P38 is theortically still in service today as it was upgraded to the P1 in 1957. Production on the P1 ceased in 2000 but the pistols are still in service. 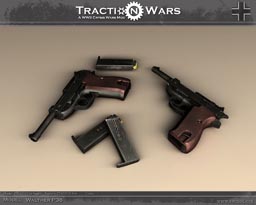 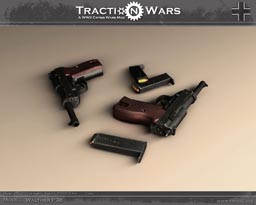 The SMi-35, which stands for Schrapnellmine Model 1935, was the most common bouncing mines used by the Germans. On contact they launched into the air, after being triggered, and then exploded at waist height. The steel balls inside then fly into all directions together with the shredded steel casing. This effective and fearsome way it killed earned the S-mine it's nickname 'Bouncing Betty'. 2 versions of the S-mine where used; the SMi-35 and the SMi-44. There are almost no noticeable difference between the two varients and it was mostly to reduce materials for production later in the war. Almost 2 million where produced from 1935 to 1945. 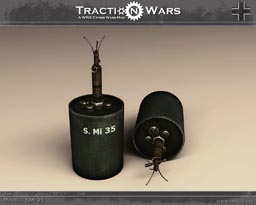 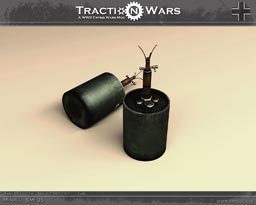 Following feedback from our last update we are pleased to announce re-renders of all the models featured, one of which is shown below. You can find the complete set of re-renders including the Lee Enfield No.4 Sniper rifle on our community forums. 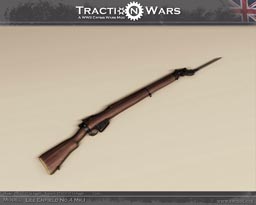 The team is looking for new developers to join, so if you think you have a skill we could use, please fill out a recruitment form here. We are especially looking for Animators, Riggers & Coders but we are recruiting in all areas.

That's all for this update, see you again next time. Until then be sure to check out our community forums and comment on news, post suggestions and become part of our rapidly rapidly growing community.

sweet!! awesome stuff!!! cant wait to use the bouncy betty!

Looks great, but I have to say that the hand grenade is pretty colorful... Overall, fantastic!

The grenade is quite accurate I.E color bands:

Sweet, but was wondering when we going to see some ingame stuff. Crysis will make it looks really real.

Keep in mind that all weapons have to be rigged, animated, etc. before we can show anything.

I've to copy/past one of those "Amazing, ******* amazing!" comments, but it;s true ;p
Simple question, is mod compatible with Steam version of game or not?

What do you mean exactly?

It's a mod for Crysis Wars, so I'm not sure whether it will be download-able through Steam at a later stage though. Could be an option perhaps.

Yes Traction Wars will be compatible with the Steam version of the game.

Steam users will in all likelihood will have to download the mod off our website and install as if you have the standalone version. The installer will recognise you've got the steam version and install into the correct location.

I hope that answers your question.