It’s been over a year since we last posted an article like this, and we felt like it was high time we got around to informing you what’s going on with this project. In this article we’ll go over why we suddenly became so quiet, the current state of the project, and what’s in it for the future – lately there’s been some rumors circulating, claiming that the project is forever dead, but that’s simply not the case. It’s very much alive, but we’ve had to rethink our original goals and go for a different path with our ideas and future plans.

A change of name

We would like to start off by saying sorry for our absence. In our last article over a year ago we promised that the project was close to release, but we overestimated our own abilities and also ran into serious issues around Christmas a year ago. While our small and slightly demotivated team did our best to cope with the various issues, we simply could not continue with our original plans for WW1: Source and release the project in the way we originally intended. We will not go into details about the issues we faced, but we will instead be focusing on what’s happening with WW1: Source in the year to come. So let’s get straight to it!

As you can probably tell from the title, the changes that WW1: Source has undergone in the past few months have been very drastic. WW1: Source is no longer WW1: Source, we’ve instead decided to rename this project to Screaming Steel: 1914-1918, or simply Screaming Steel for short. The reason for this has to do with the new scope of the project. It can no longer be seen as a modification built from the Half-Life 2 source code with our own changes and additions. It simply does not feel right for us to brand our mod with “Source” in the title, as this brand is typically used for mods based directly off of Half-Life 2. Another reason for the name change has to do with the incredibly big change between our last released version of WW1: Source (1.13b), and our current build of Screaming Steel. We believe that these two versions of our project are simply too far apart from each other in functionality, features and gameplay to be put under the same name.

To follow up completely with this change, our MoDDb page will also be renamed to Screaming Steel, and will be dedicated to our progress on this new and exciting version of our project. This allows us to keep all of our old followers, media and also downloads, preserving the history of WW1: Source without splitting up the established community for the project. The rebranding of the MoDDb page will happen a few days after this article has been posted (if all goes as planned!).

At this point you’re probably asking yourself: What makes Screaming Steel so different from WW1: Source 2.0? The answer: We are no longer a modification built on Half-Life 2, but a total conversion for another already existing game. This might sound a bit confusing and odd at first, but here’s an explanation:

A change of game

Previously, WW1: Source was a modification based on a branch of Valves SDK Base, which was both a good and a bad thing. On one hand, we had full control over what we wanted to implement for our project, but that leads to the bad thing. The pipeline for actually getting work implemented, tweaked and perfected in the SDK Base is a bit of a developer’s hell. The work pipeline is outdated and cumbersome, and at times it was completely impossible to make progress because of Valve occasionally flat-out breaking modifications with some of their SDK Base updates. All of this coupled with a small, tired and demotivated team meant that progress was painfully slow, and at times there were gaps of several weeks or even months between periods where we actually made notable progress on WW1: Source.

The rescue for this development hell came with the release of the WW2 FPS game ‘Day of Infamy‘ made by New World Interactive, the same people who made the incredibly successful game Insurgency. Day of Infamy is based on a very recent build of the Source engine, providing improvements to stability, optimization, visual fidelity and much more. Perhaps the most important thing is that Day of Infamy provides the community with excellent support for modding. So good in fact, that it actually made sense for us to switch from the old SDK Base over to Day of Infamy in order to continue our project in a much more effective, pleasant and less time consuming manner. This means that Screaming Steel is now a total-conversion project for Day of Infamy, and not a standard mod running on the older version of the Source engine. This also means that you will have to own Day of Infamy on Steam in order to play our project, which might upset a few of our fans. We do hope however, that this article provides sufficient explanation for why this move was necessary for us. Quite simply, there are many more positives than negatives regarding this change, and here are some of the more notable positives that we hope will convince you even more regarding our decision: 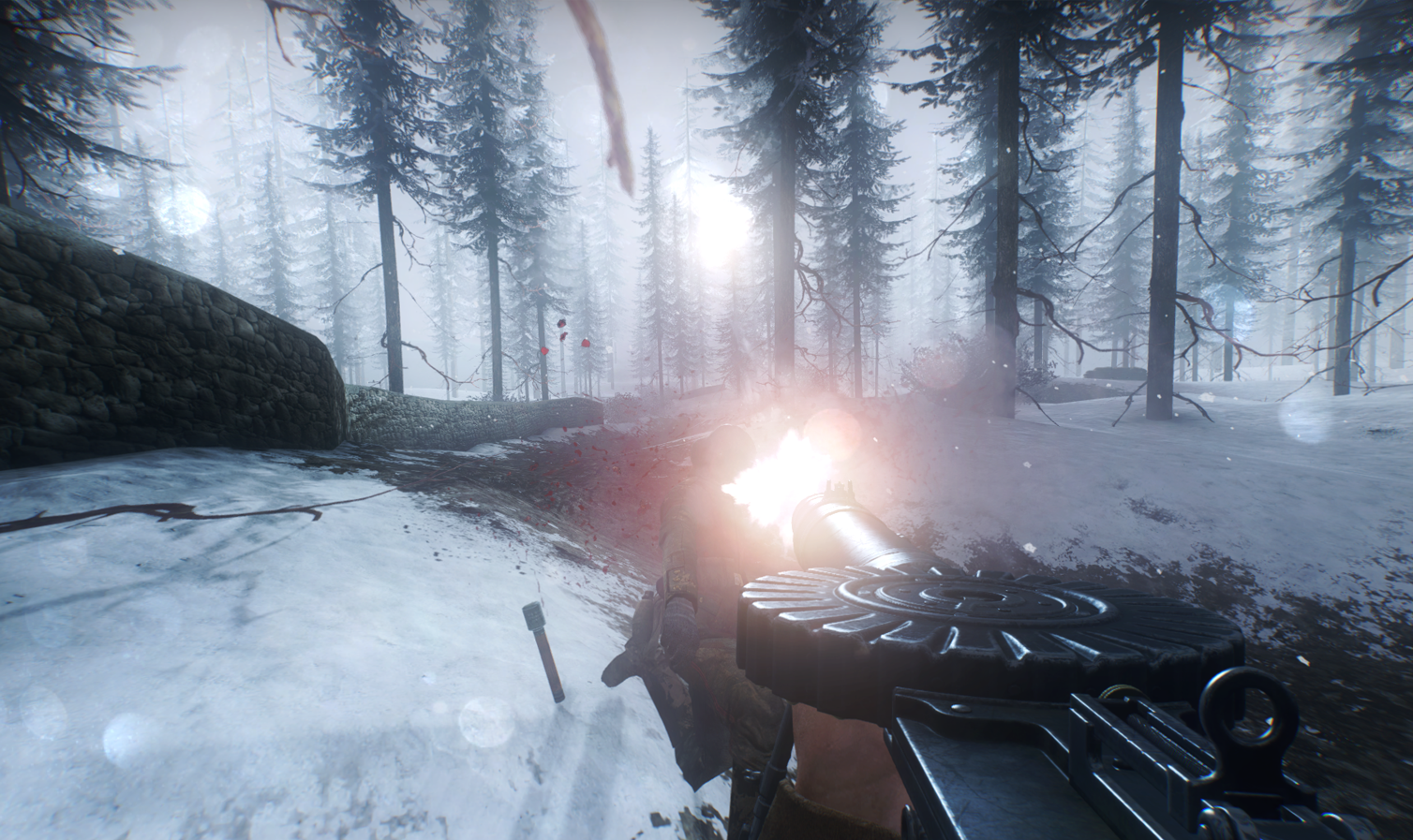 The Lewis gun from vanilla Day of Infamy being put to good use against the huns. 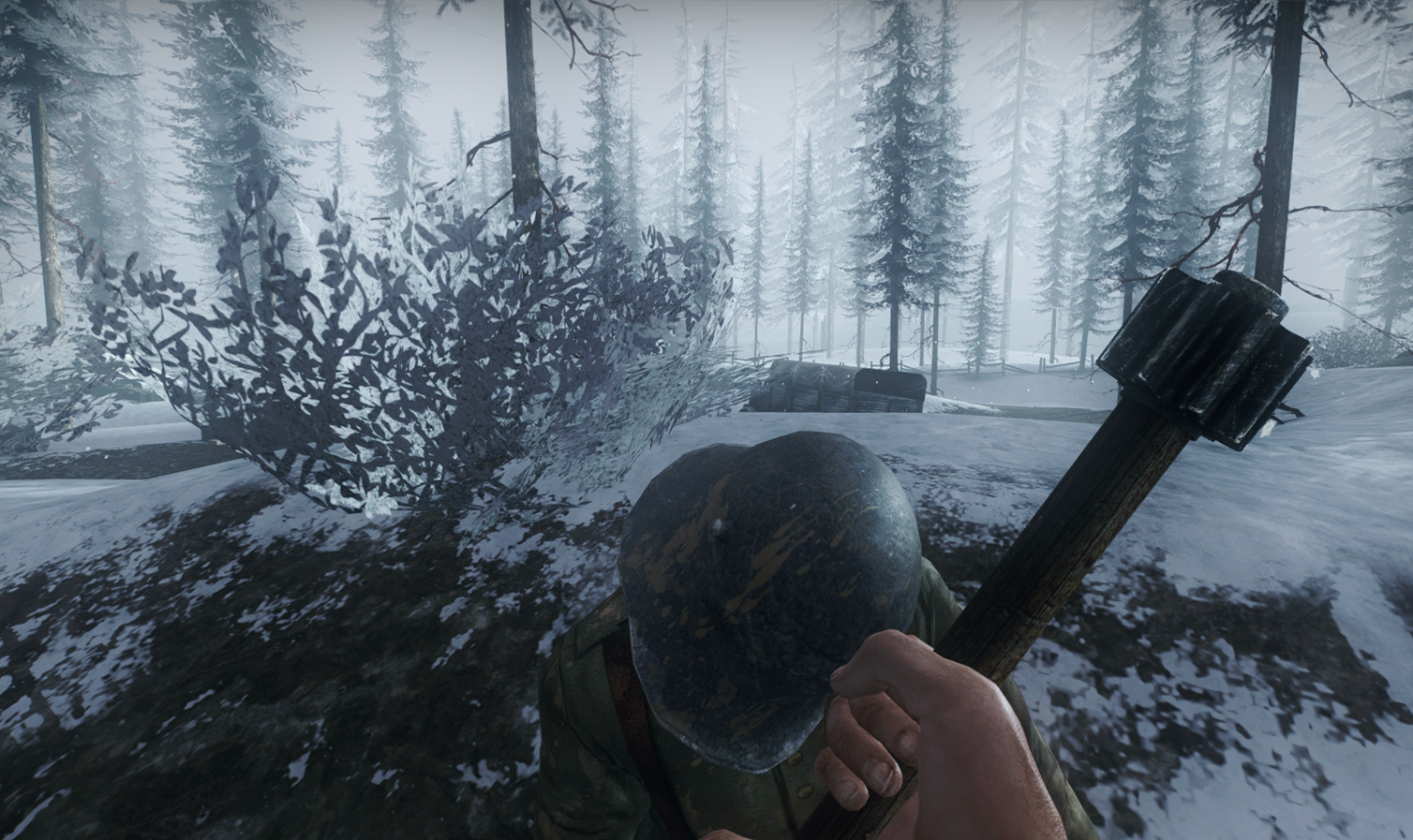 Porting over our trench clubs was a job that took about 30 minutes; a good example

of how easy and fast it is to get work done when modding Day of Infamy.

Hopefully all of this has given you an insight on why we decided to follow through with this migration, and we’re also hoping you’re as happy about it as we are! Now that we’ve gone through a lot of tedious text and information it’s time for some eye candy. As we mentioned, Day of Infamy is a on a whole new level of visual fidelity compared to anything else running on the Source engine, and this means that we will have to update some of our older art from WW1: Source. The first thing we want to show you is a new model for the Gewehr 98 rifle which was kindly donated to us by our past team member Volcol. The Gewehr 98 will be the most common weapon you’ll see in the hands of German soldiers in Screaming Steel. 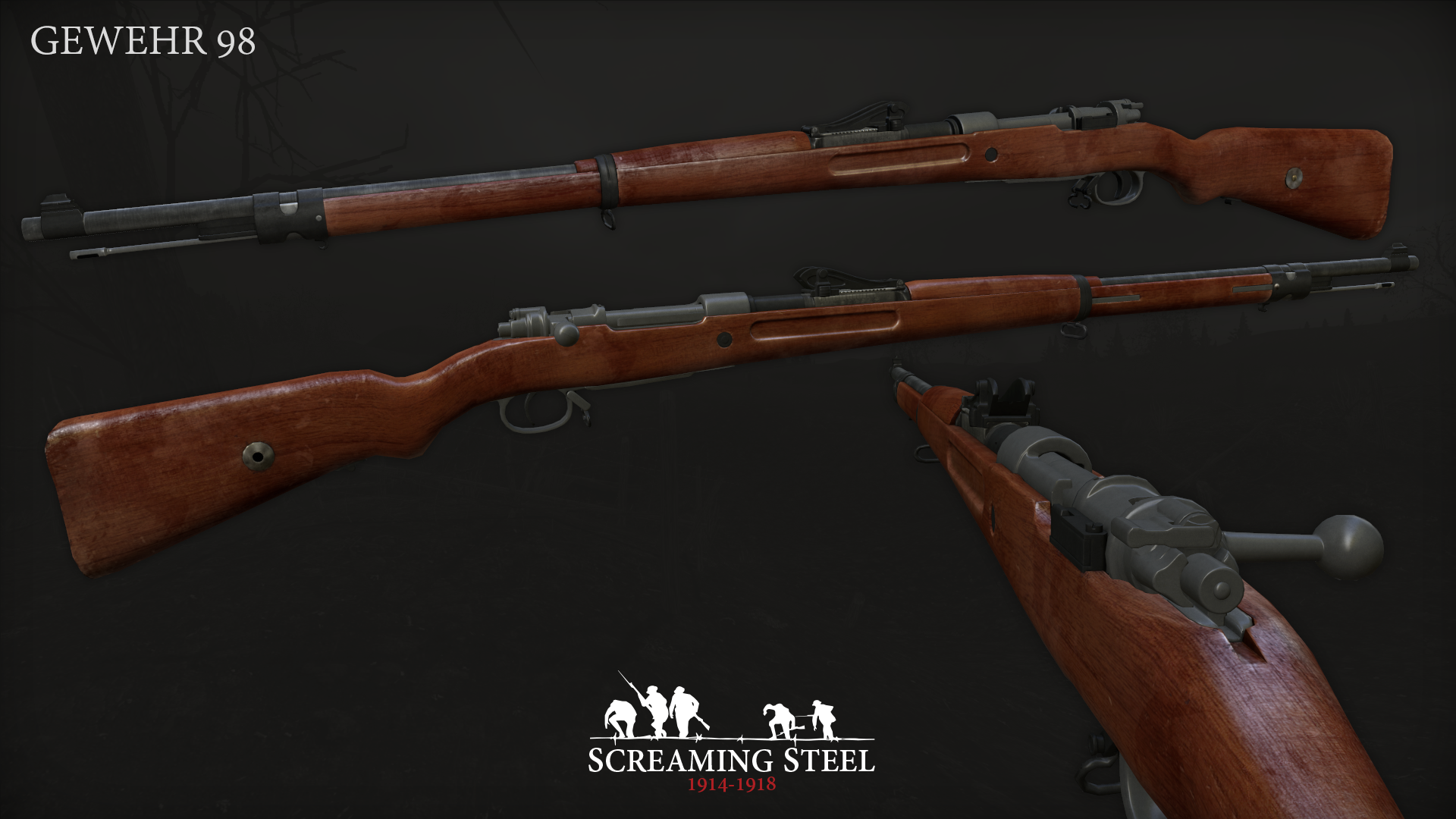 Day of Infamy uses an interesting system when it comes to loadouts for your soldier, which we will put to good use in Screaming Steel too. In addition to different classes to choose from, there is also a “supply point” system which allows you to customize the loadout of your class. This system allows you to change primary and secondary weapons, weapon attachments, grenades and different types of kits and webbing. As an example, this system means that our Gewehr 98 has several upgrades that can be applied to it; A bayonet, a sling, stripper clips, an optic for the marksman class, and also rifle grenades for our sentry class. 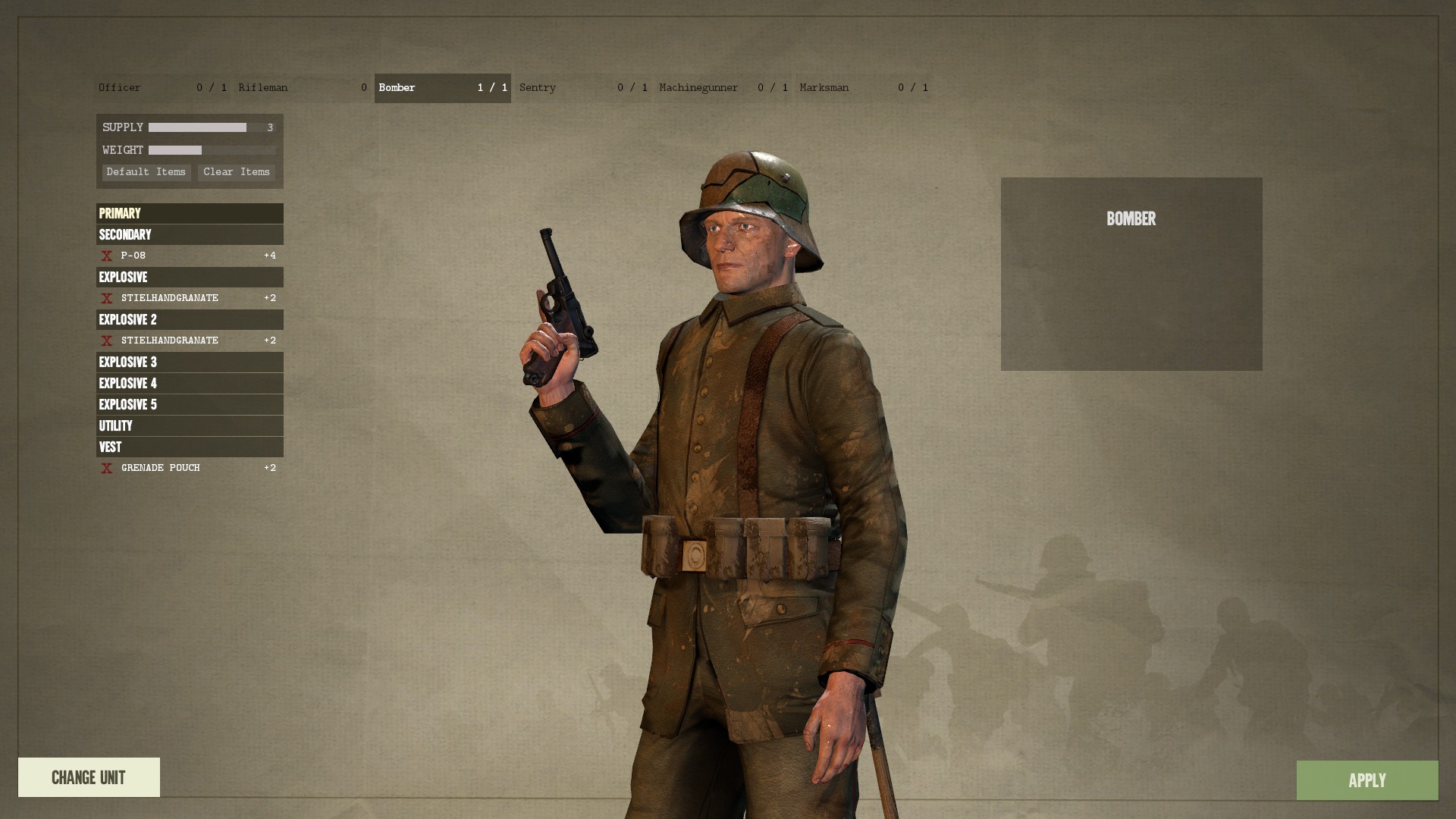 The loadout and supply point system allows you to shape your own way of playing the classes.

Another thing we want to show off is our playermodels, ported over to Screaming Steel from our older build of WW1: Source. The credit for the original models also goes to Volcol, but we saw it fitting to upgrade some parts of them. The heads and hands have been ported from the standard DoI playermodels, and they have also been rigged to fit the new skeleton used in DoI. The credit for these changes goes to Venom of the DoI modding community, and we feel he did a great job on them! Keep in mind that these screenshots show things that are work in progress, and the weapon models in particular are simply placeholders! 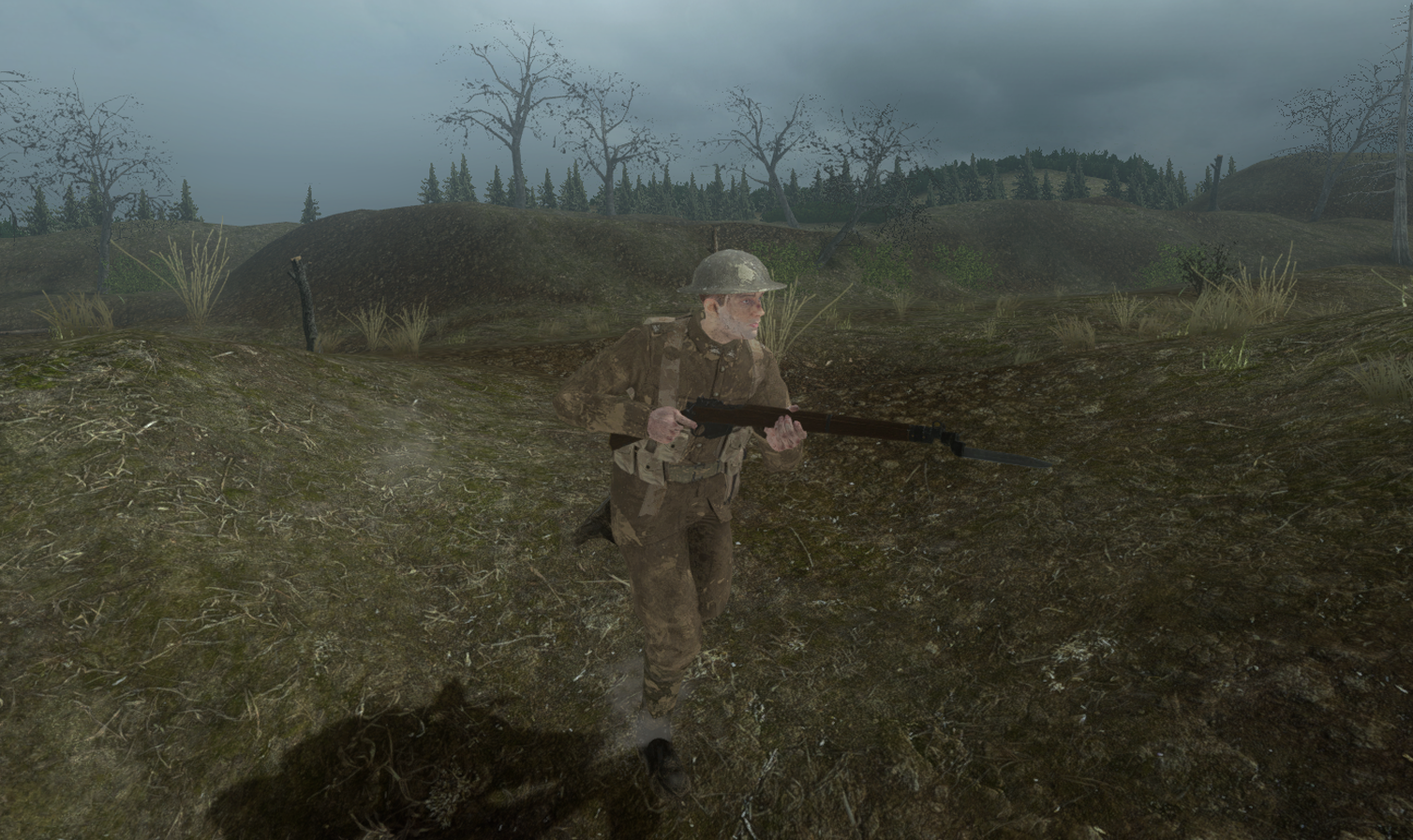 A British rifleman running through the no man’s land of Somme, a fan favorite map from

the WW1: Source mod currently being ported over to Screaming Steel. 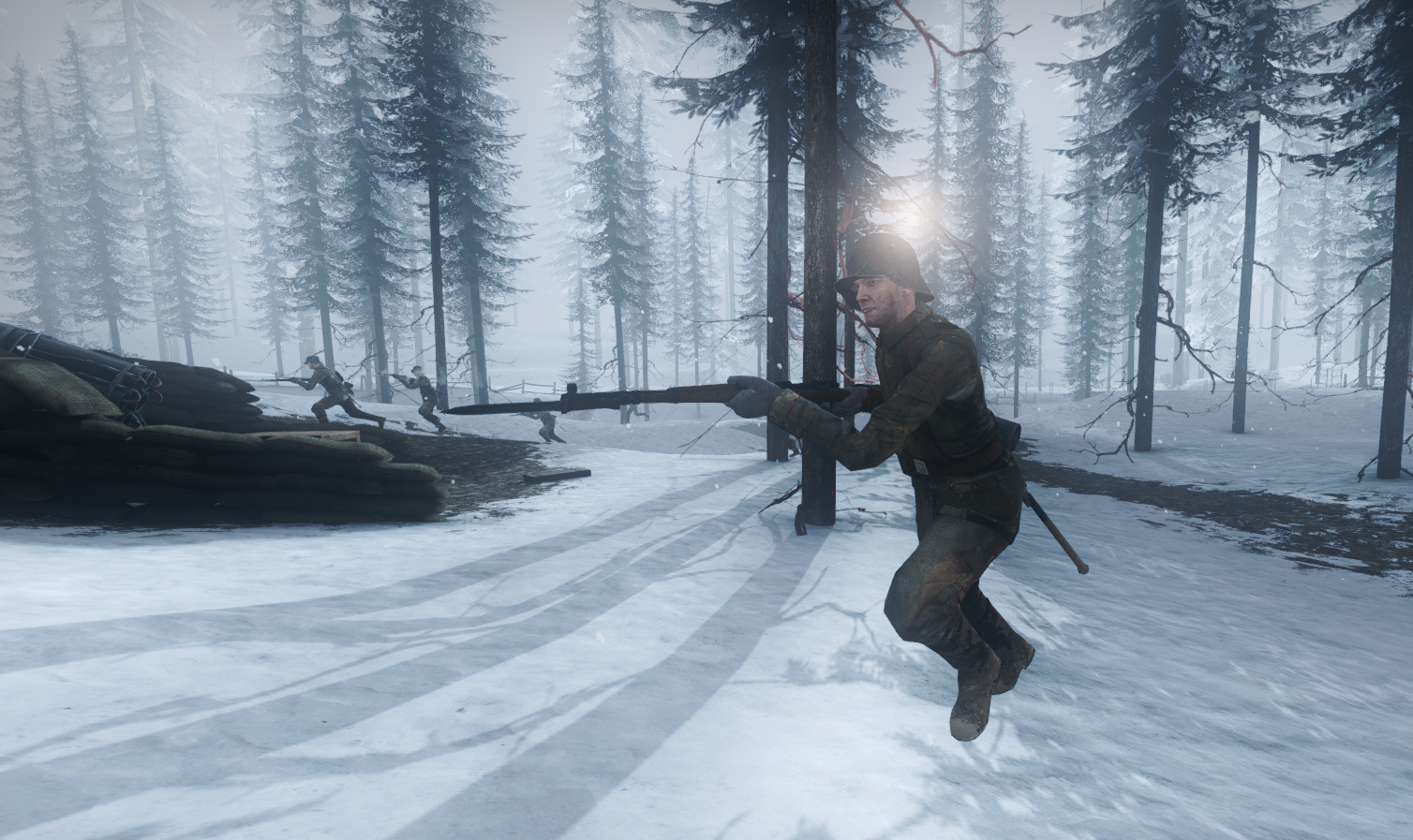 A line of German infantry charging with their bayonets on a vanilla Day of Infamy map. 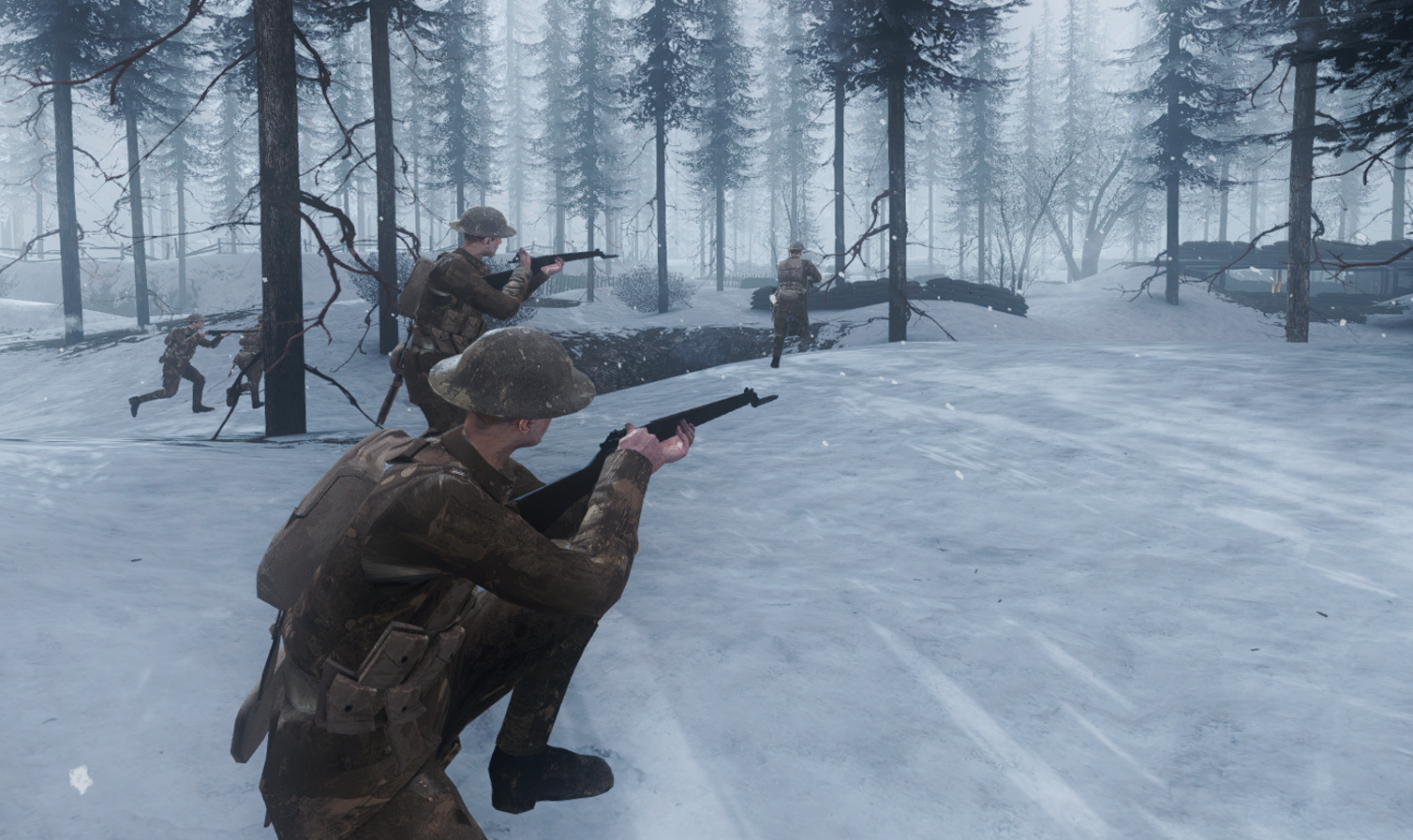 A small group of British riflemen picking their targets.

That’s all for now! Hopefully you can forgive our almost complete absence for the past year, and that you enjoyed reading and looking through our explanation for it. This is a completely new chapter for WW1: Source, and its future in the form of Screaming Steel is looking brighter than ever before. We promise to post updates a lot more frequently in the following months, as progress is going much faster than before because of our migration to Day of Infamy.

We hope you’ve had a merry Christmas, and that you’ll also be having a happy new year – we know that we will.

It's great to see that you're still alive and kicking.

So it won't be free anymore. But glad you are still alive! :)

Technically our project is free, but yes, you will have to own a copy of Day of Infamy on Steam in order to play it.

yes. And also don't you fear that it will limit the access to the ones who own a good computer? the source engine runs fine on small configs, but for day of infamy, im not sure.

NWI are constantly optimizing their game as it's in early access, so I wouldnt worry too much about that. I assume one could use Insurgency as a reference-point, as it's not in early access anymore. If you can run that game fine, you will probably be able to run Screaming Steel fine as well.

so it will be a mod for DoI? thats amazing!

Wow, this is looking fantastic!

WOAH! this looks great how much have you done for this mod?

Great job guys. You never gave up. Glad it is finally paying off

Thank you devs for your hard work and dedication.

Will this go on the DoI workshop when it is released?

Read the article, it is mentioned.

Wow, it is a really good update. I just started looking forward to this mod as I recently got into Insurgency / Day of Infamy and as someone whose computer is too old to run Battlefield 1, this looks like a solid alternative.

It's also a smart move since you can reuse a lot of DOI assets for this game indeed. I like the new name aswell!

Overall it might be one of the most optimistic updates on the source modding scene in this awful year of 2016... congratz and good luck with development!

Hey as long as your not like those pussy developers that completely change the enginge to something like UE4 im fine with what you guys are doing. We need to keep the Source modding community alive. Ive seen so many projects switch different engines over the years its just saddening. And every time there only excuse is that Source is to difficult.

Well, source is a bitch to work with.

I admire NVI, they are true professionals. Move mod to DOI base was a good idea, it's the key to success. If all goes well, whether you plan to make a stand alone game and sell in Steam?

Will the Germans have chin straps when carrying helmets?

Dismemberment will be there?