We have six new in-game screenshots to show off from the mod, as well as the announcement of one new unit and two new structures. C&C 3: The Forgotten is a mod that adds the story of The Forgotten, a group of Tiberium mutants from C&C lore, into C&C 3.

We've been very hard at work over the past few months, and we're nearing completion of the in-game art, as well as our special and still-secret feature (to be announced soon, we promise). To this end, we've got some new in-game screens to show off for you guys, including some featuring our newly-announced additions, the Tick Tank (by Luckie and Kane Nash), the Crane (by Nielsen), and the Relay Station (by Helge and Kane Nash).

The Tick Tank, an old Nod stalwart from the Second Tiberian war, is the main battle tank of choice for The Forgotten. As the player, your actions in the campaign will help acquire it. Though somewhat outdated, Tick Tanks resilient armor, relatively cheap price, and dependability make them solid units in The Forgotten's army. As an added bonus, because so many of The Forgotten fought for Nod in the last war, their commanders are capable of getting the most out of these reliable old tanks, which are capable of burrowing into the ground for added protection.

The Crane and the Relay Station are more straightforward structures. The Crane permits additional building construction, while the Relay Station is essential for utilizing advanced technology and for communicating with the civilian population. Through judicious use of Relay Stations, Forgotten commanders can radicalize and inspire locals to aid their cause, a dangerous force multiplier if left unchecked. Here are six new screens. 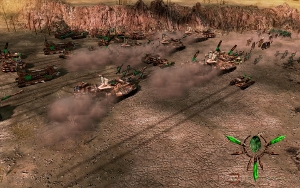 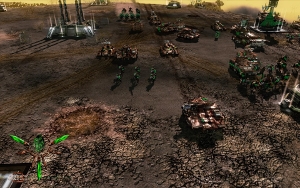 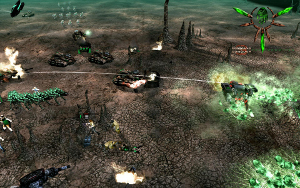 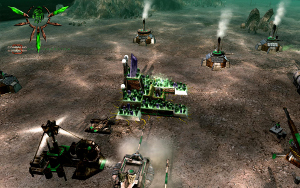 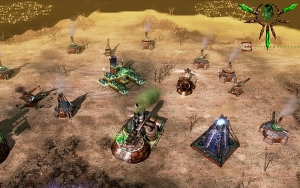 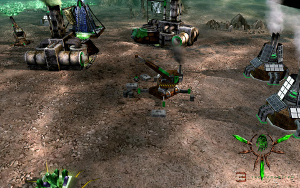 You'll see an aircraft in the next update.

Wow the Relay station looks great!!! it looks almost exactly like the concept. The crane also is really awesome. can't wait for more!!!

The Forgotten will no longer be forget again!