A repost of our 2015 April Fools post, with actual news added.

A lot has happened since December and we have exciting news. We have two new additions to our team, a new programmer and a new 3D artist.

Our new programmer Hanfling joined us late last year to fix bugs in native Deus Ex code. However, this has evolved into the creation of a full featured Deus Ex content creation framework called the Revision Framework. Its roadmap includes support for features found in all current game engines such as terrain, static meshes, deferred lighting and fancy materials to push Deus Ex: Revision visuals to a whole new level.

Cyrus -- the other new guy -- will pitch in to make use of these features, and create tons of static meshes, while adding content that Project HDTP didn’t cover. Right now he is working on: 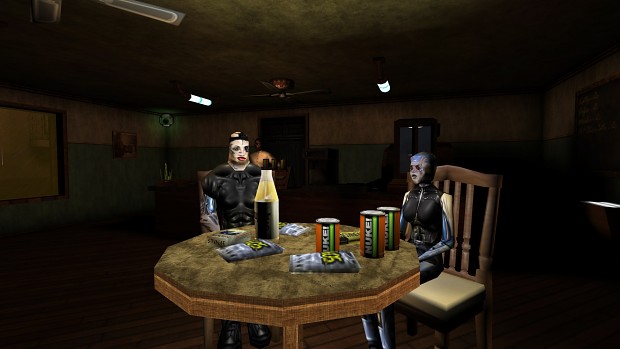 To make full use of the scheduled engine features we need to remake or at least update most of the content already created. However the whole team is excited to make use of the new features and make Deus Ex: Revision the best Deus Ex incarnation of all time.

Edit: As you many have realized, this was an April Fool's post; we won't delay Revision for any new features.However most of the post is correct, Hanfling is working with us to make the Revision Framework and the long term goals are to include the mentioned features, but that would be years into the future. Currently it's mostly a WIP framework for mods to easily and properly integrate into the game without having to replace DeusEx.u. It will also improve the editing workflow with a new set of tools. It will not be used in the 1.0 release and we'll only lift a few features from it, such as a fix for incorrect footstep sounds and UI scaling.

We also do have a new 3D artist named Cyrus that joined us a few weeks ago, and he is currently working on replacing some vanilla models, however certainly nothing as indicated by the picture above.
We are very close to release right now and beta testers will be contacted shortly. More info soon to come :)

Didn't you guys mention in your December update that you were planning to launch in the next 10 weeks?

Yeah, well things never turn out like you'd expect if one is working for free. Real life happens, issues crop up that you don't expect. But we are very close now.

Very good to hear.
Oh man, I hope there is no more delays, I really want to play this asap.

so does this mean there may be a 1.1 release with new feautres, and it won't delay the 1.0 release? rad!

We will make a 1.1 release sometime, yeah. Not sure when and with what features.

Oh man, a Really3D version of DX:REV would be quite the .. .. experience.

That is awesome news! To know that even after release you guys plan (or hope at least) to continue improving revision and DX even further really makes me happy. Thanks for the heads up.

New native code will be added to the mod? If so, What new features will you include with it?

We are including RenderExt, an extension to the rendering subsystem to increase some limitations so the game won't crash with too many lit surfaces in view. We are including fixes for bugged functions like the TraceTexture function not returning the correct texture. Stuff like that.

Also, you said you were fixing bugs in some native functions... do you have source to look at to know what to fix or do you just go off of the headers?

Anyway, thanks for answering! Another question, have you guys ever gave a stab at new physics?

Well we got IDA Pro, if you know what I mean. And then some src for other unreal games that are public.