Take a look at how wave mode transitions to a space map with Space Anoat.

In terms of the maps I've been adding to the mod, this is somewhat off that beaten path. Space Anoat is, of course, in space, but it's not designed the same way as the other space maps the mod currently has.

Unlike the previous four space maps, this map is specifically designed to support the previously-land-only mode "wave mode." If you will remember, wave mode is a mode designed to pit a single player (or in rare cases multiple human players) against increasingly numerous and/or difficult enemies. To really make this work for a vehicle-only map, a basic space template wouldn't work, so this map is specifically created to support this mode (and no other). 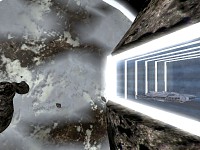 Space Anoat has the player flying the Millennium Falcon against waves of TIE fighters of various styles. Just like before, there are still six waves (and one unlockable seventh wave) that you'll have to fight through. Unlike before, instead of each wave being timed, the player is given certain objectives to accomplish in that wave (e.g. "Destroy four TIE Bombers"). I'd like to say that there is some artistic decision here, but that's really just a compromise made so that the player doesn't simply avoid the TIEs by never leaving his hangar. 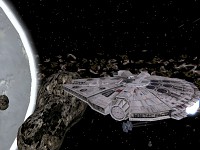 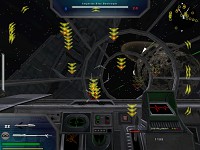 The map is also not easy (as should be par for the course for any of the wave modes). It's a substantial piloting challenge, as you are required to dodge not only enemy fire, but the furball of craft that later waves become along with a number of asteroids, small and large. Because of this, the player is awarded an opportunity to gain back health based on the difficulty of the craft they kill (e.g. killing a TIE Fighter nets you a small health bonus; killing a TIE Advanced nets you a significantly larger one).

haha it's awesome... Could you to developer a Millenium Falcon control panel as in the movies?

The regular star destroyer is fine.

Are you going to make more space heroes? I think it would be cool if there was a princess padme's ship. You know, the big silver one that is really sleek. There should also be count dooku's ship. And have you ever heard of durge? Well anyways, he has this really cool ship called a Novasword space superiority fighter. It would be awesome if you put him in the game as a space hero!

This mod is in the "Galactic Civil War" (Episodes IV-VI) time period only.