I know that at this point I'm just repeating myself, but I had a lot of fun with this map, too. In the spectrum of work I had to do, this fell somewhere in between Nar Shaddaa and Tibrin.

Balmorra: Outpost was a map started by Skyhammer_216, but somewhere along the line it became too much work and it was left in a state of incompletion. I'd already seen some of the first work done on the map, and I liked the concept and certainly didn't want to let assets go to waste, so I went ahead and took on completing it, and the end result is what you see here. 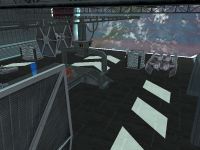 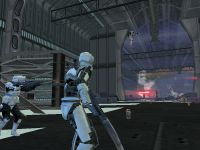 I've enjoyed very much working with maps that I can simply build in XSI and simply snap together in the world editor - whether it is a more efficient process, I don't know, but it is certainly very satisfying (so far this map, Nar Shaddaa, Korriban, and to a degree Kashyyyk were built this way). 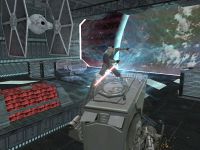 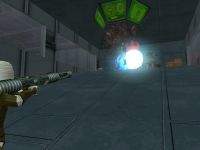 Balmorra: Outpost is a small space station orbiting the planet Balmorra, and despite no overt relation to the level, design inspiration has been taken from the TIE factory level of The Force Unleashed. The map is centered around a large hangar area, with offshoots for a control room, a cargo room, and a power generator room. 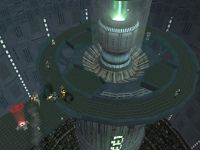 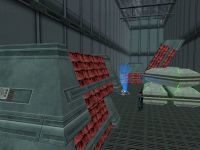 It is unique in that despite being an interior map, it opens up and allows itself to work with vehicle combat. These are mostly AT-STs (another design cue from the aforementioned TIE factory level), but there are also small treaded transports that can be used to zip around the level. These transports are completely non-canonical (named TIE Haulers, to pay homage to the other TIE treaded vehicles), but I made them because I hadn't played around with treaded vehicles before and I thought it'd be good practice. 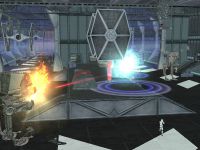 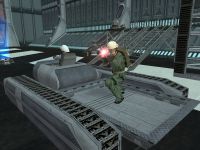 There are also several animated events taking place in the level - ships fly in, dock, go on patrol - you can't see them in the pictures but they do a nice job setting the ambiance. It's a fun level to play around in! 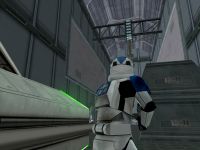