What do you mean "Pirates of the Caribbean Part 4 will be released in 2011"? We just released it today! Ok, so it's PATCH 4 rather than PART 4, but one thing is for sure: it's a major improvement over the previous edition.

Build 14 Beta 1 Patch 4 is the next release in a long line of continuous improvement. As per usual, it contains more fixes and should play more stable than any of the previous editions. However, in additon to that, it contains a wealth of material for those people who care about the selection of ships we've got available in the game.

For one thing, it contains both subtle and not-so-subtle improvements to ships that were already in the game. The textures of the battleships, the flags and masts of the lineships and many other details have all been improved upon and new details have been added, including anchors, steering wheels, figureheads and stern decorations and in a few cases even captain's cabins that are visible through the stern windows.

Of course this release also contains all of the recently released Historical Ship Pack models, along with several additional ones that are introduced in this release for the first time. The added ships are based on true history and come from different time periods. The ships range from 4 to 104 guns, but but no matter what size, the high level of detail is consistent throughout them all. 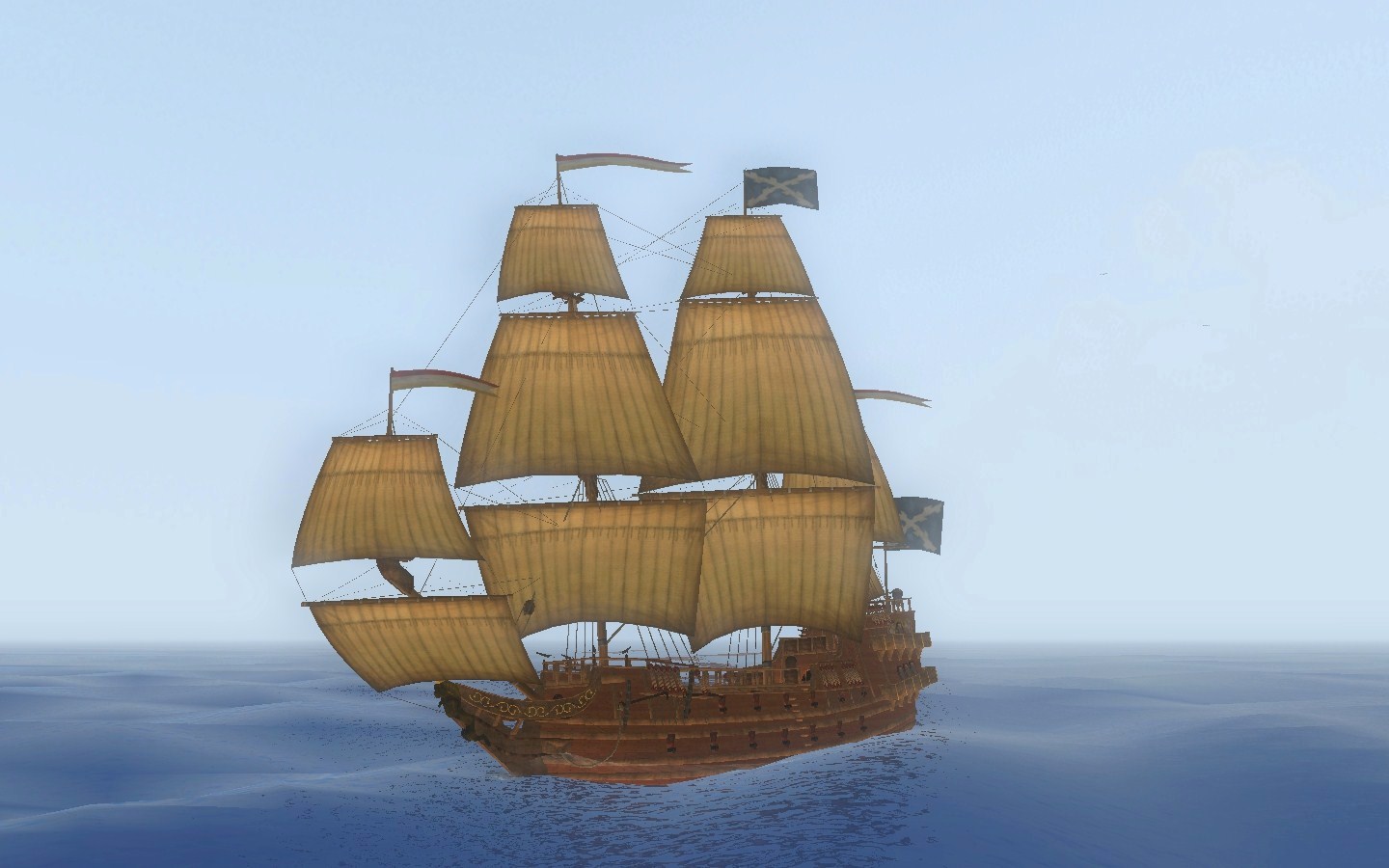 Apostól Felipe, 1626
Type: Treasure Galleon
Guns: 30
Class: 3
History: The Apostol Felipe was one of the six galleons, which was built by Martin de Arana for the Spanish King Philip IV. This type galleon was used for the transport of goods and resources on the route between America and Spain, called the Carrera de las Indias. In 1629 they carried gold and precious stones on the way to Spain. She was the flagship of the Armada de la Guardia until 1633, and took part in the war of Brazil. 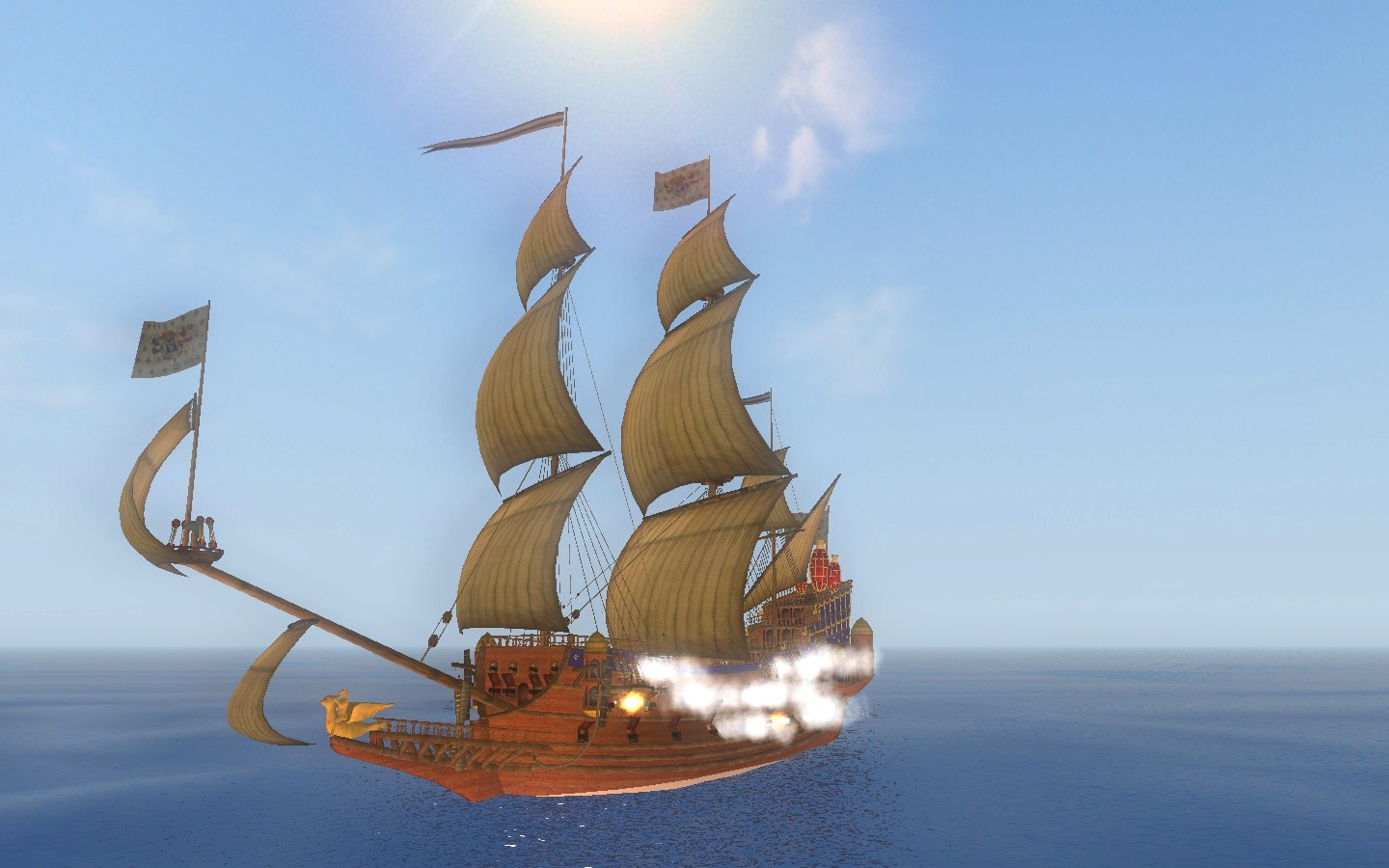 La Couronne, 1636
Type: War Galleon
Guns: 64
Class: 3
History: La Couronne was an emblematic flagship of the French Navy built in 1636 by Cardinal de Richelieu, and was the first man of war built by the French themselves. The contraction was overseen by the famous carpenter Charles Morieur, from Dieppe. She was one of the most advanced vessels of her time, and was equipped with 64 heavy guns, 8 firing to the bow and 8 to the aft. 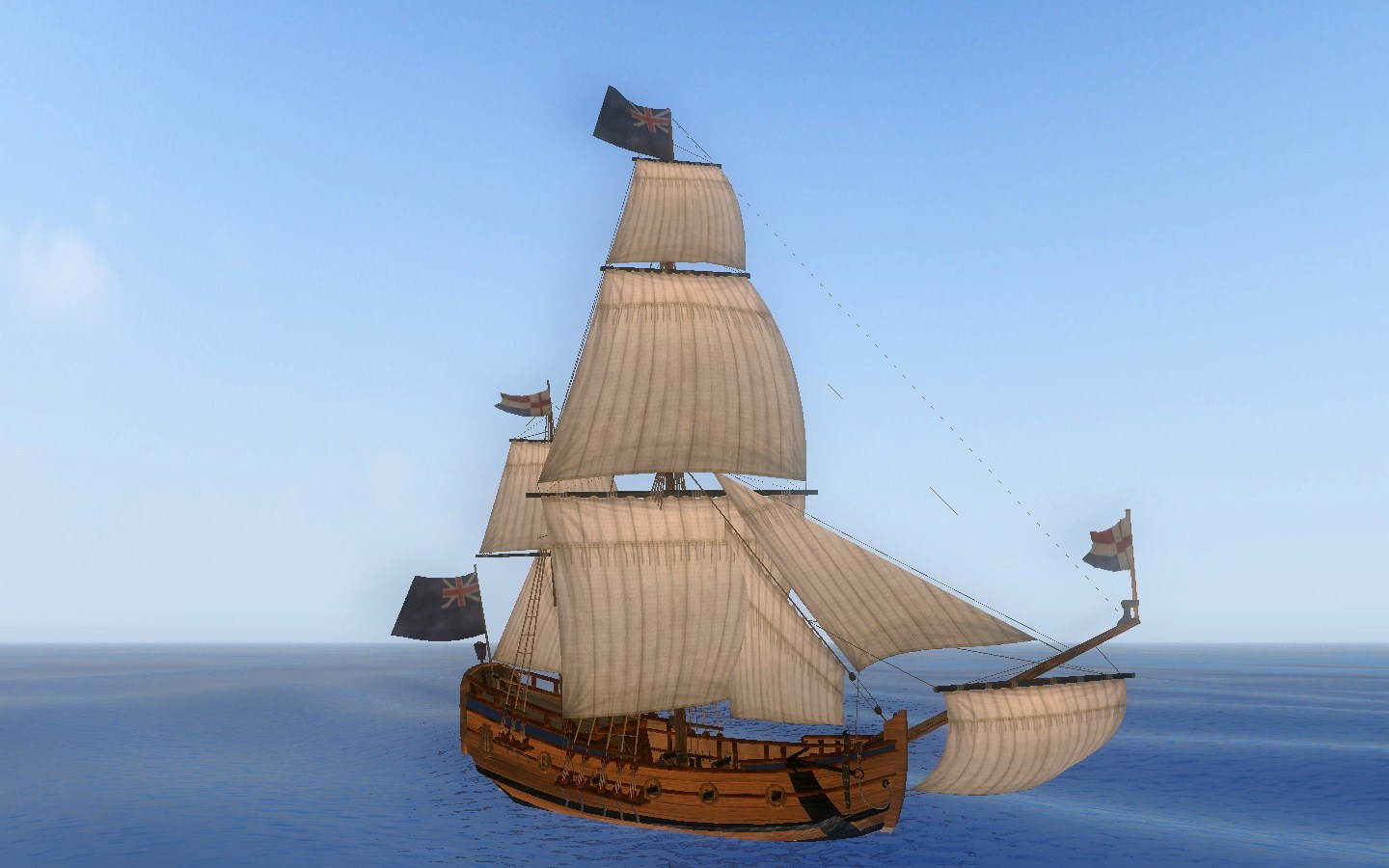 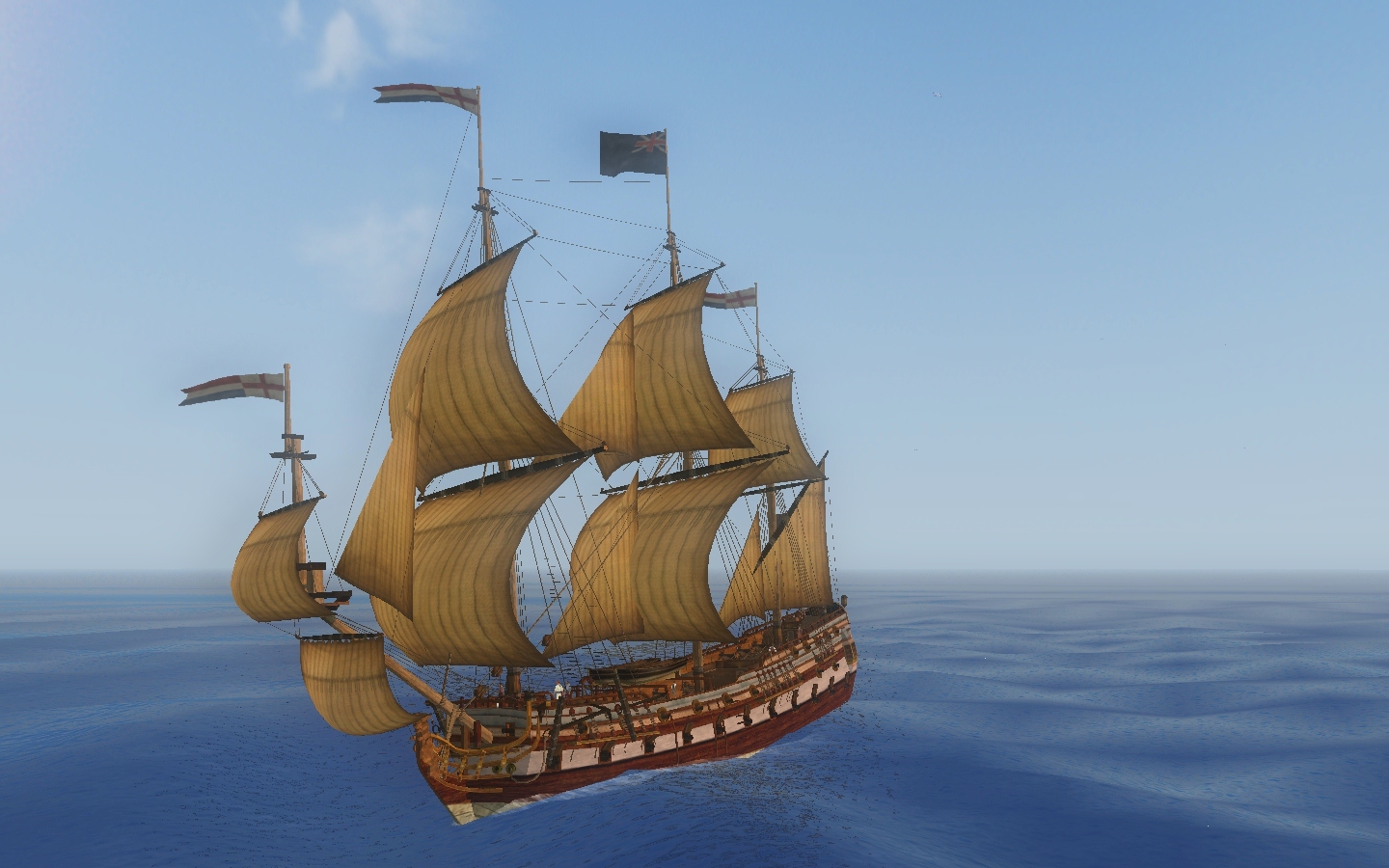 HMS Mordaunt, 1681
Type: Ship of the Line
Guns: 58
Class: 4
History: Originally designed to be a 46-Gun 4th Rate, Mordaunt was launched in 1681 and was privately owned and named after the owner's surname. She was purchased into the Navy in 1683, and used in many engagements, most notably on 4th October 1689 when she formed part of a fleet fighting 12 French warships. In 1693, she became stranded and was lost. 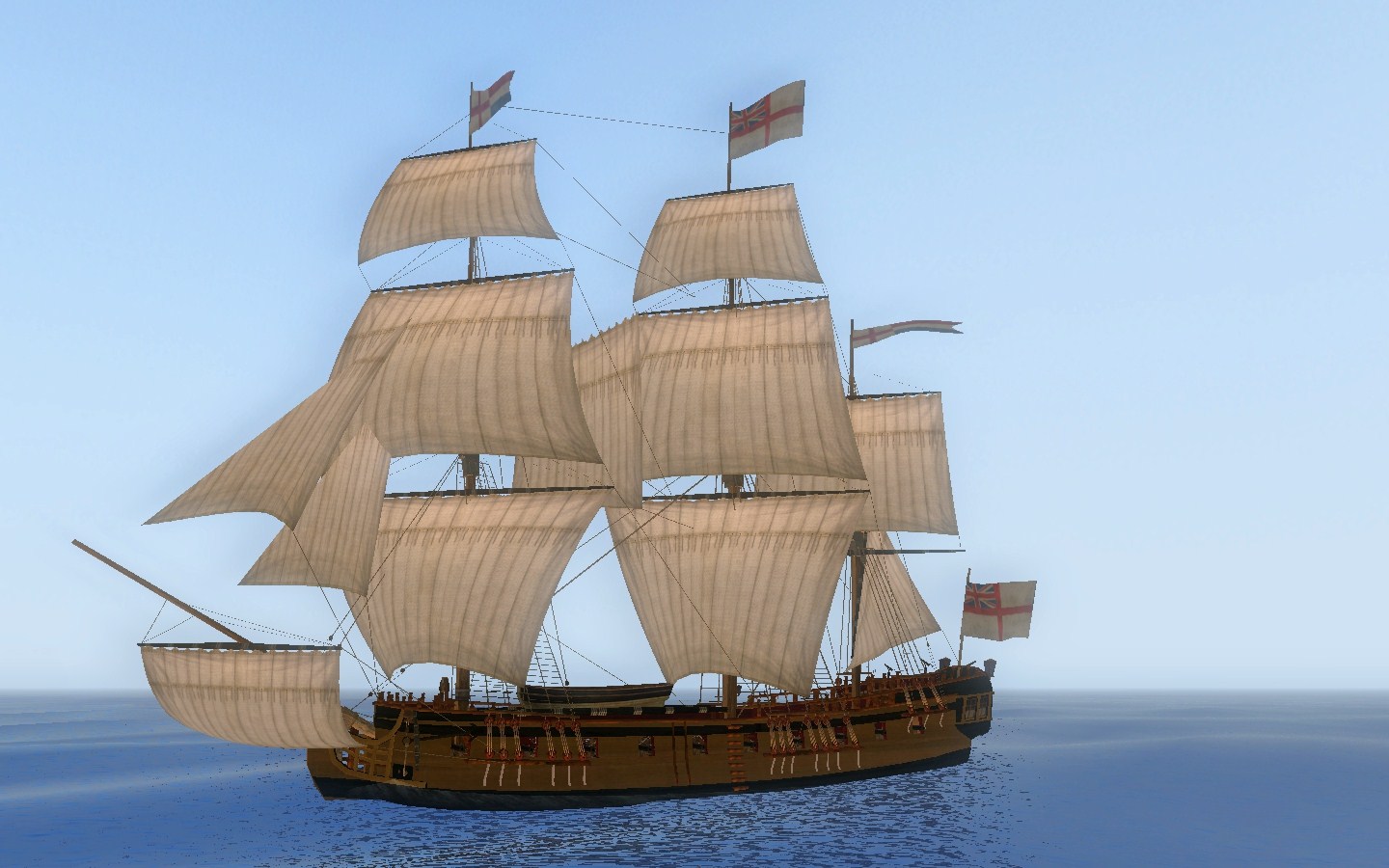 HMS Greyhound, 1720
Type: Frigate
Guns: 20
Class: 6
History: Little is known about this ship, only that it was the type generally used to hunt pirates, due to good speed, manoeuvrability and gun loadout. 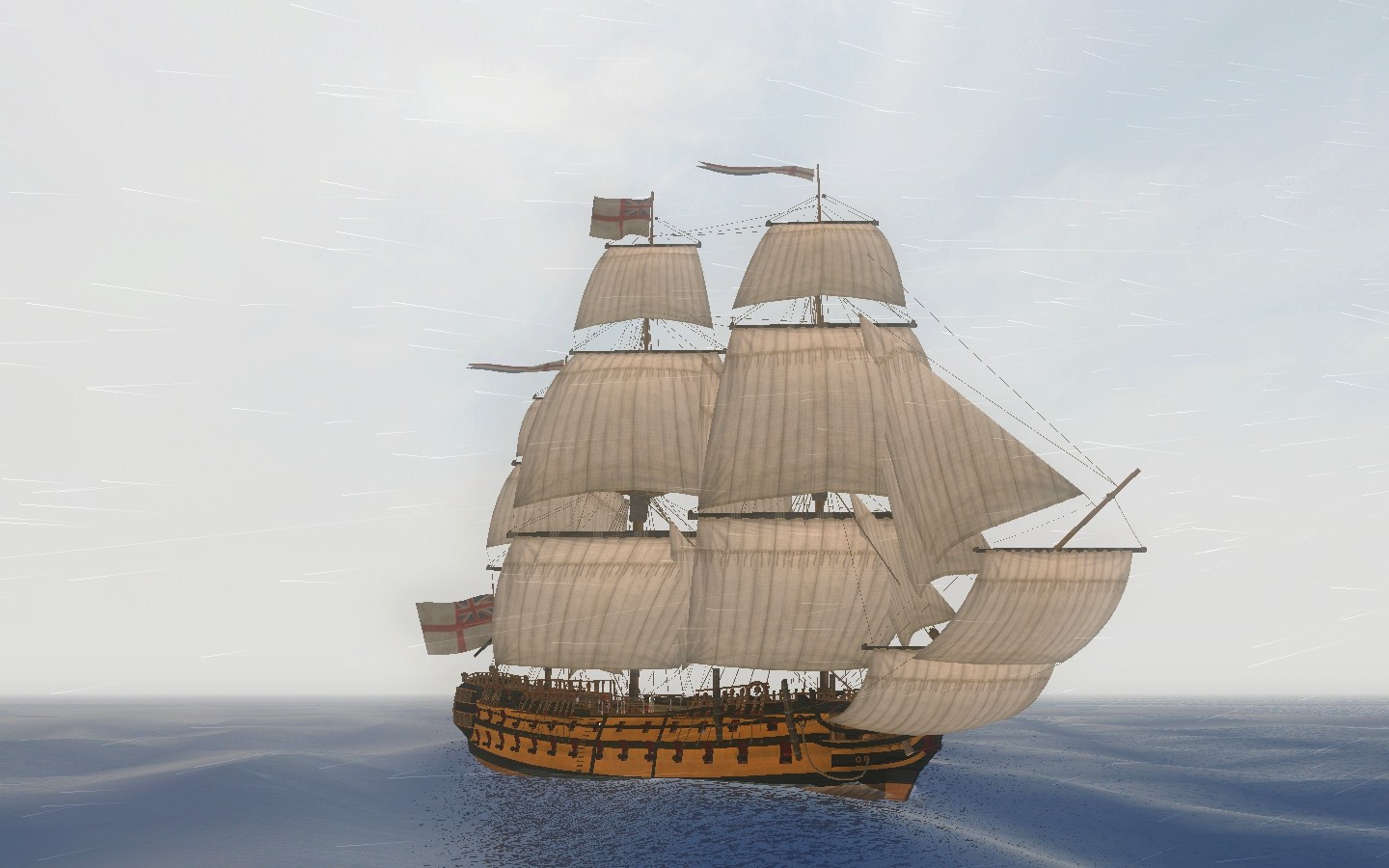 HMS Bellona, 1760
Type: Bellona Class Ship of the Line
Guns: 78
Class: 3
History: Bellona was commissioned in 1760 as a prototype for the 74-Gun 3rd Rate, typical of the latter part of the 18th Century. She was the second ship of the Royal Navy to bear the name, and saw service in the Seven Years' War, American Revolutionary War and the Napoleonic Wars. In 1780, she was one of the first Royal Navy ships to receive full copper plating on the hull, which prolonged her life until 1814 when she was finally broken up. She had served an unusually long 54 years in the Royal Navy.
In fiction, she is featured in two novels of the Aubrey-Maturin series as the pennant ship of a squadron led by Jack Aubrey. 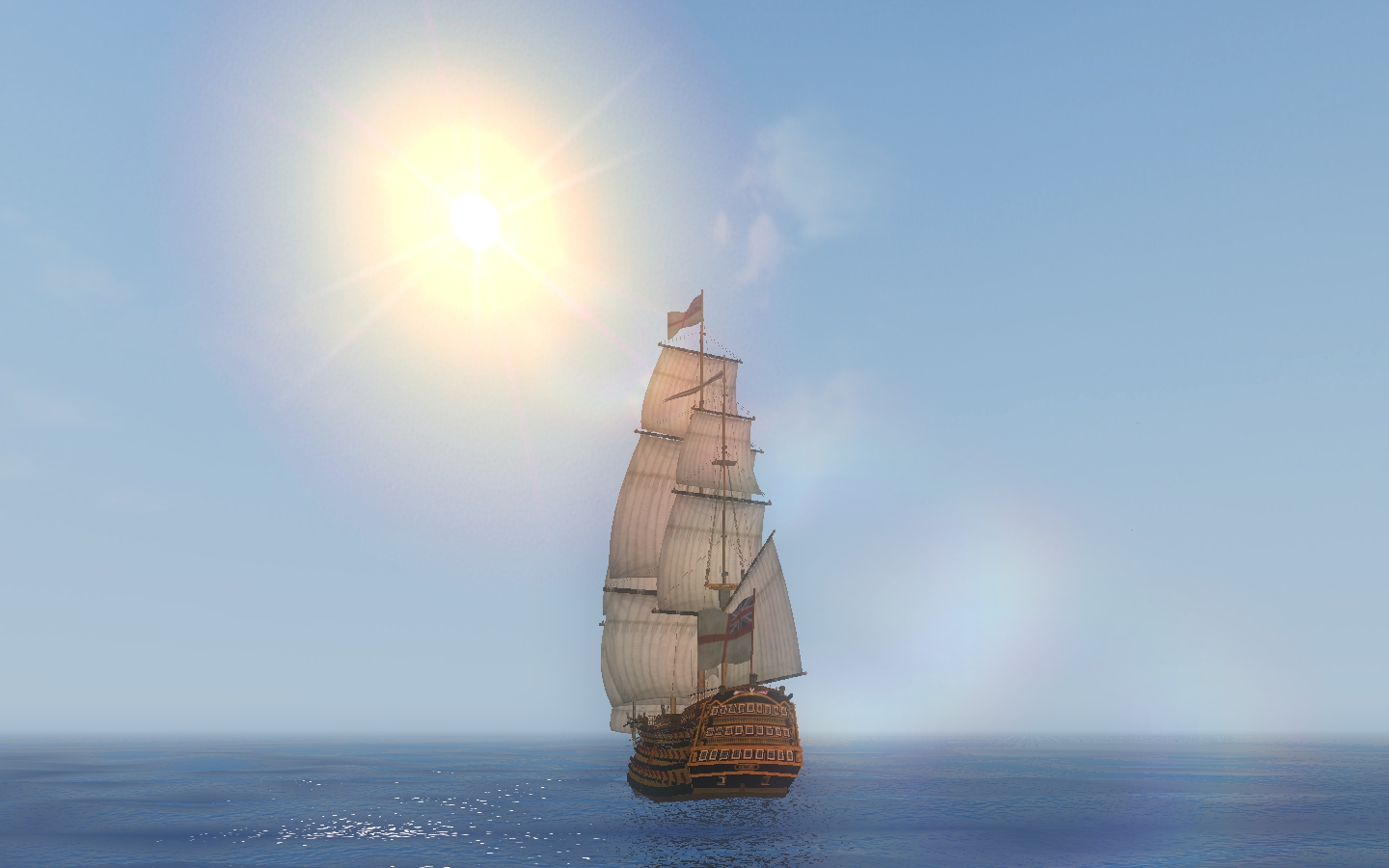 HMS Victory, 1765
Type: Ship of the Line
Guns: 104
Class: 1
History: Victory is best known for her iconic performance at the Battle of Trafalgar, under the command of Lord Nelson. She survived intact, and is still in commission in the Royal Navy, making her the oldest commissioned warship in the world, despite being in dry dock. She now serves as a museum ship in Portsmouth, England, and resides in the same dockyard as the Mary Rose and HMS Warrior, two more iconic ships from the Royal Navy's past. 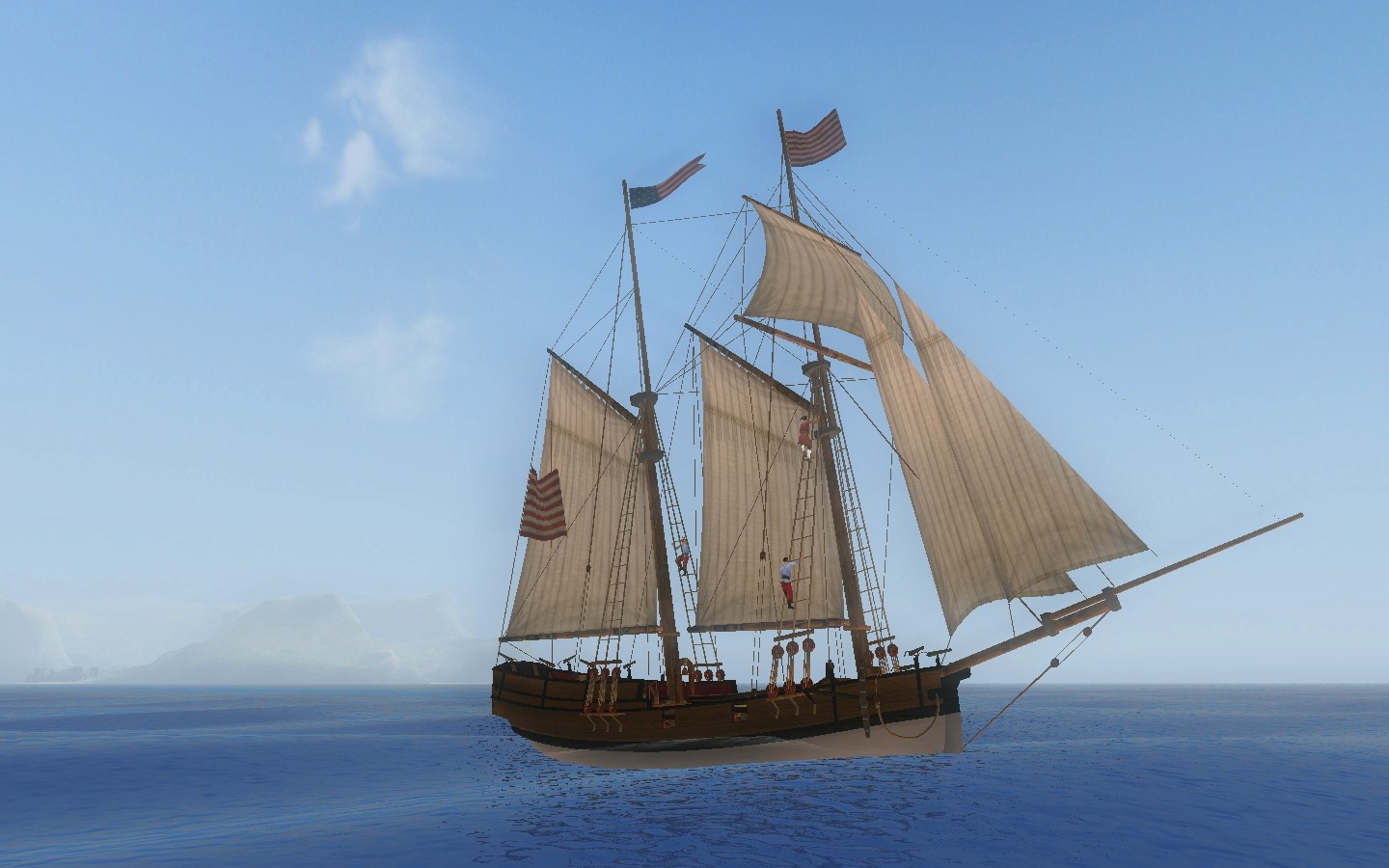 USS Hannah, 1775
Type: Merchant Schooner
Guns: 4
Class: 8
History: The schooner Hannah was the first armed American naval vessel of the American Revolution and is claimed to be the founding vessel of the US Navy. She was commissioned by General George Washington, and proved a useful vessel to the young navy. 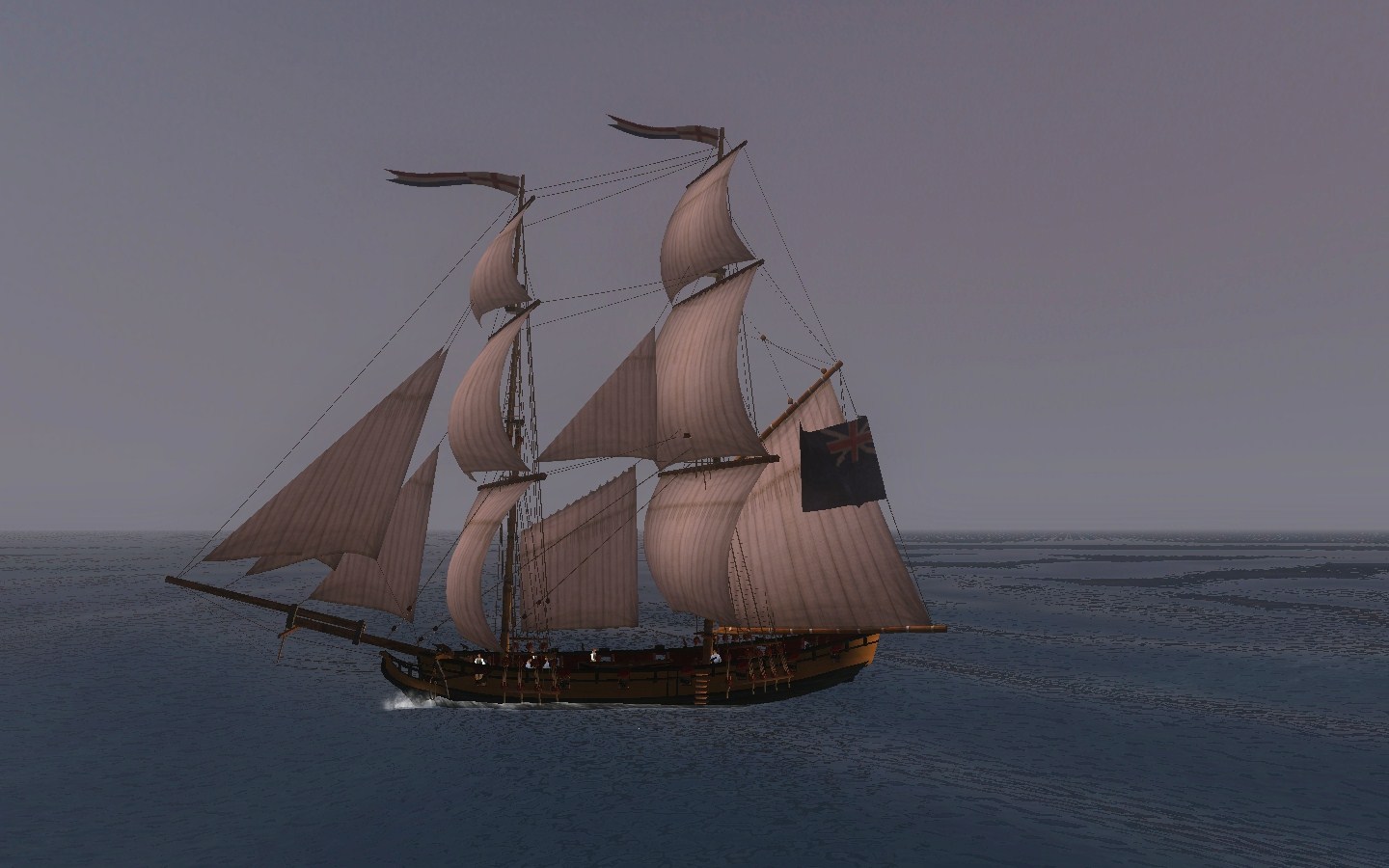 HMS Speedy, 1782
Type: Speedy-Class Brig
Guns: 14
Class: 8
History: Probably the most famous Royal Navy brig was HMS Speedy. She is remembered as the vessel in which Lord Thomas Cochrane, appointed captain 28th March, 1800, acquired his reputation as one of the most enterprising officers of his day. Speedy was escorting a slow transport when she was set upon by three French frigates. After several hours of combat, Cochrane was forced to haul down his flag, but it is doubtful that Speedy entered French service. 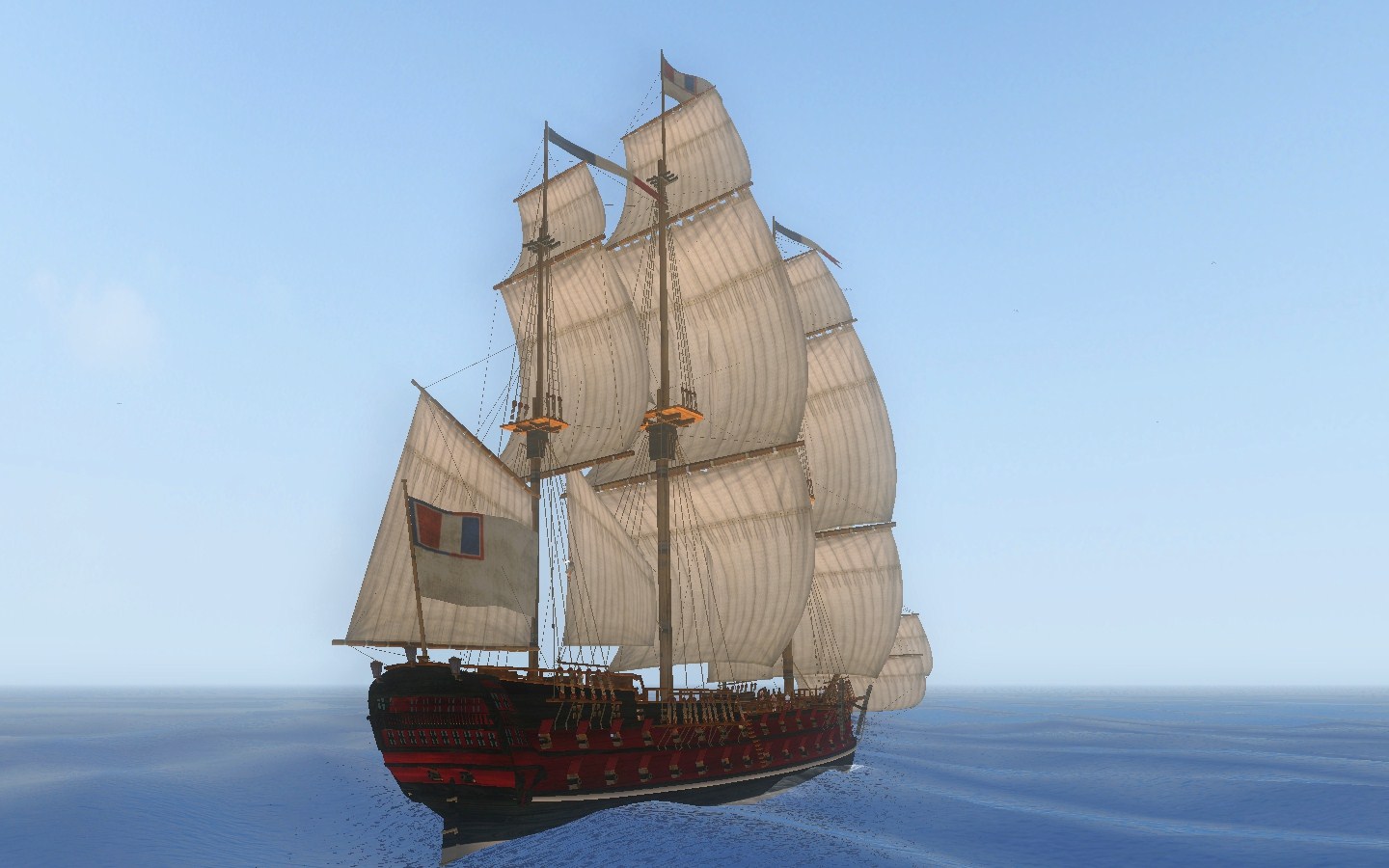 Le Superbe, 1784
Type: Téméraire Class Ship of the Line
Guns: 76
Class: 3
History: Le Superbe was one of the 107 3rd Rate ships of the line built between 1782 and 1813 for the French navy. This class was envied and even copied by the British Royal Navy due to its effectiveness and popularity. Superbe took part in the Croisière du Grand Hiver, where she sank due to a leak. 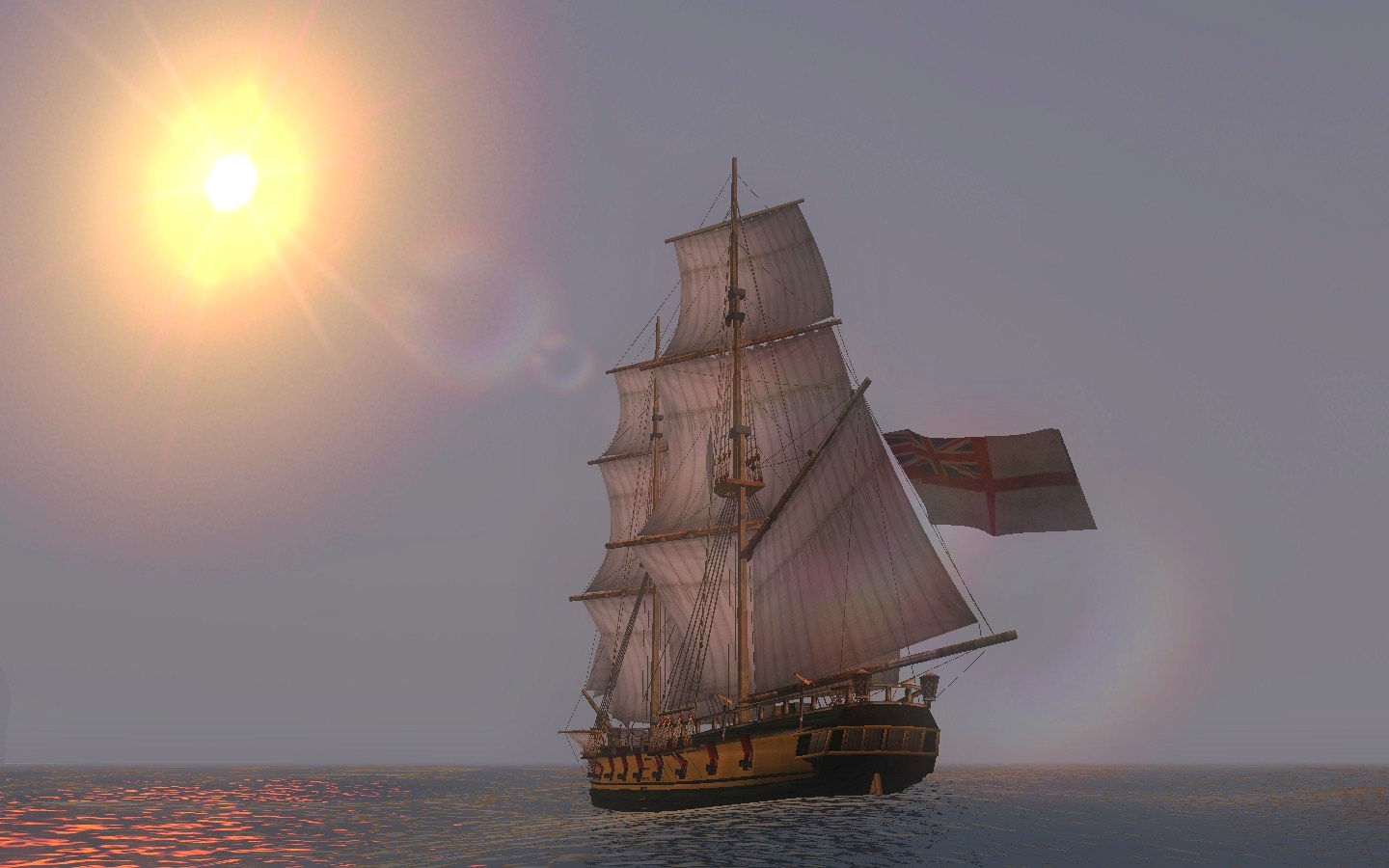 HMS Sophie, AKA HMS Vincejo, 1798
Type: Brig
Guns: 18
Class: 7
History: The HMS Sophie, fictional ship of the Aubrey-Maturin novels, was based on the real-life HMS Vincejo, launched in 1798. She was captured from the Spanish in 1799 by the Royal Navy, and then captured by the French in 1804. 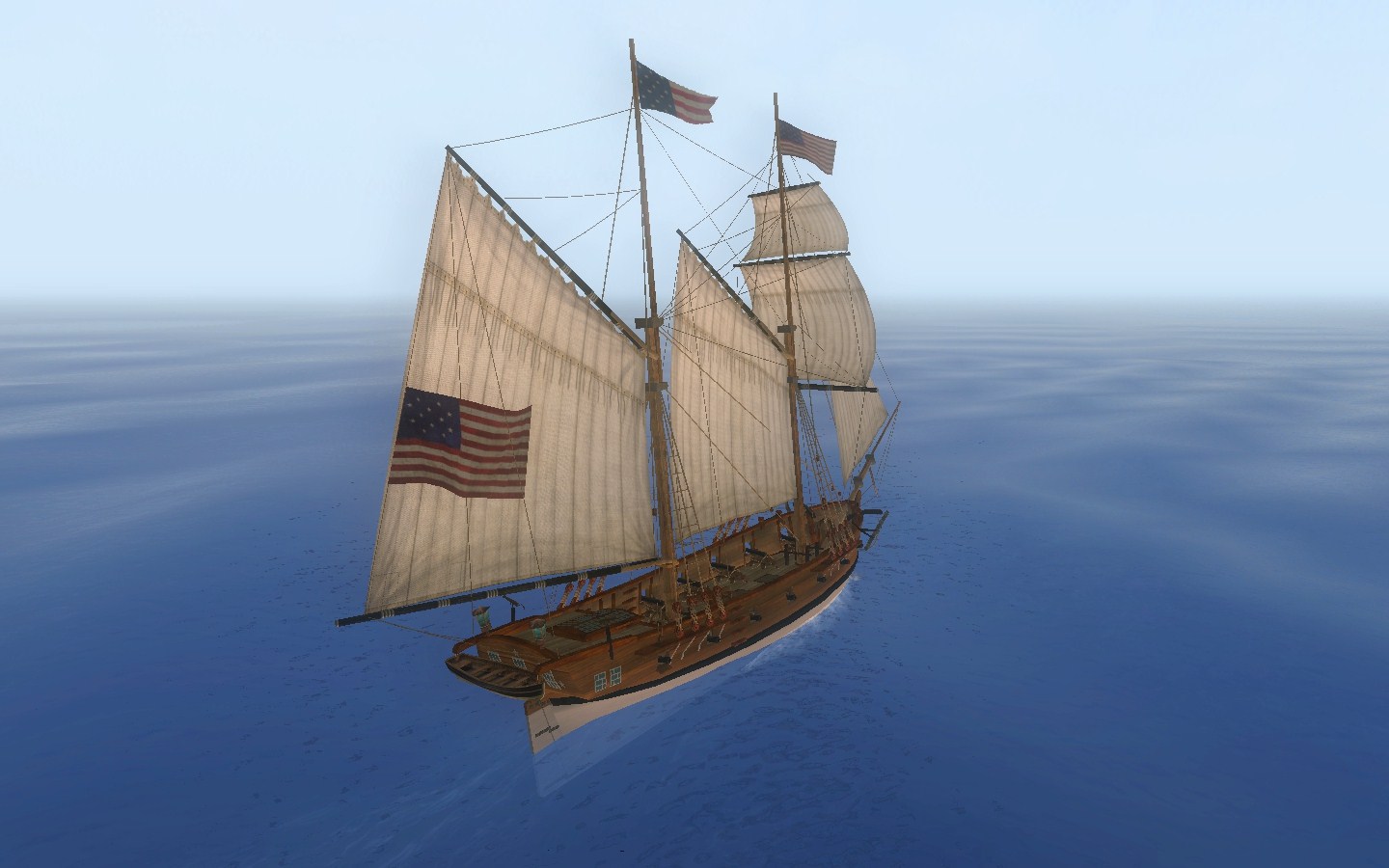 USS Enterprise, 1799
Type: Schooner
Guns: 14
Class: 8
History: USS Enterprise, third ship to bear the name, was a schooner built at Baltimore, Maryland in 1799. She was overhauled and rebuilt several times, changing from 12 to 14 guns, and saw her first action in 1801, when she engaged and defeated a Tripolitan corsair of the same armament. She fought many a battle until she became stranded and broke up on Little Curacao Island in the West Indies.

Aye, we're still going strong, with no sign of stopping any time soon... ;)
It really is amazing how this is the Build Mod's 8th year running!
And it's great to see previous members coming back every now and then, especially on the main website.

Sorry, I'm a huge Aubrey-Maturin fan and want to offer a quick correction.

HMS Sophie is based off of Lord Thomas Cochrane's HMS Speedy, down to the logbook. Cochrane even took a xebec-frigate while outgunned like Aubrey managed. It's pretty awesome. Definitely a good read if you have the chance.

I'm really excited to see that this mod exists. I'll probably have to try it out this week.