It's been awhile I' haven't taken the time to write about the game. In the previous article I talked about technical stuff and possible features... Today we'll talk about something else : THE STORY !

Historically, The Lost Maze is more like a technical demo than a real game. I started to work on it with XNA then MonoGame, I released a first version and now I'm working on the remake which uses Unity3D ! But players don't care about technics, players want to play, nothing else. I've understood. After a very useful conversation with a guy that I don't knew, I've decided to create a real universe and a real story to transform this technical stuff into a true game for gamers.

Note: It's a "beta" scenario and the content can/will change.
You're a young adventurer who are a little mad, and you have heard an old legend about a relic that can make you immortal. This relic is kept in a mountain by an unknown spirit. All people who have tried to get it are died and no one returned. Because this adventurer is a bit mad, he decides to get this relic to become stronger, immortal and adored by everyone. 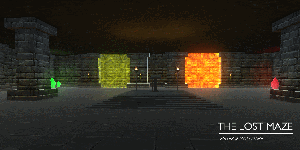 A voice from nowhere talks to him about his new quest. He must find four artefacts to unlock the door that keep the precious relic. He is alone in this place but he don't care about that because he is sure to retrieve the relic (and why not the pretty girl because he thought there was still a pretty girl in the adventures like that).

By now when you start a new game, you're in the "main room", the place where the spirit talks to you. In this place, you can enter in one the four worlds that contains five levels. The first goal is to find and get the artefact of the world, other goal will be added later. 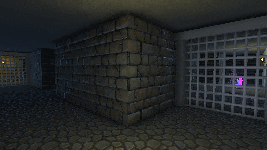 A shot of the new levels, they are using lightmaps!

Now it's time to talk about technical stuff because hey we're on IndieDB, you're maybe not a creator but you're interested by the development right?
I started the Oculus Rift port and believe me, it's just awesome! The new levels are greats with a VR headset. My goal is to release very quickly, a demo of the game for Oculus, PC and mobile.

As I already said in my last article, the game on Android already supports the VR mode, you can use a Google Cardboard/Homido/Gear VR/etc. with a gamepad and play in virtual reality, that's cool too.

That's all for today but I promise to write more often about the game because it's moving very fast these days!
demonixis.