Introducing Cogmind's new website, a central location for media, progress updates, and more! See both the past and future with analytics data and a new dev roadmap.

Cogmind development is finally far enough along that we have sufficient content for a proper website! If you noticed it at all, the original Cogmind "website" consisted of a bare-bones intro and FAQ. That placeholder has been replaced with a full site, so the game now has a go-to portal for information where you'll find a better introduction and overview, including lots of screenshots and gifs. 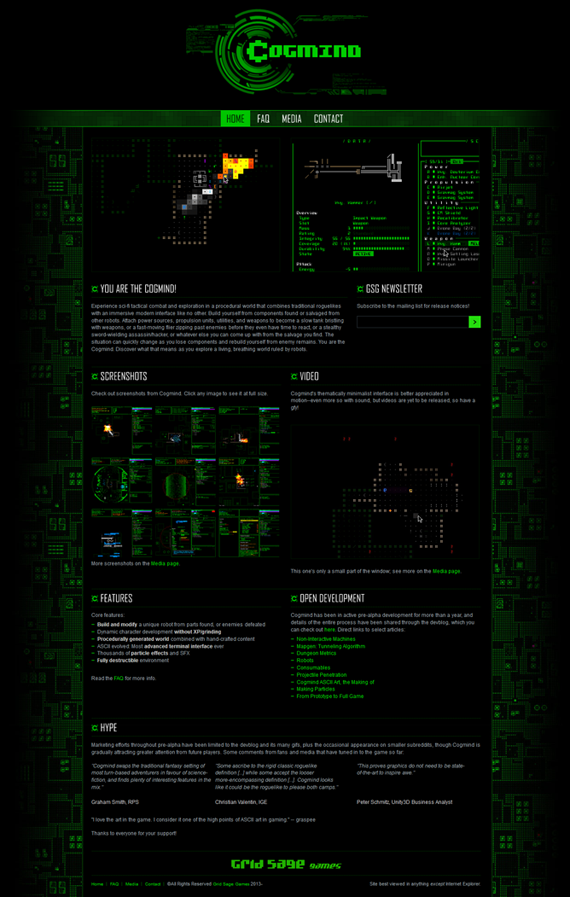 As part of the update I redesigned the logo:

The extended FAQ also includes progress infographics, which will be updated as major features are completed.

I've occasionally shown the progress graph here on the blog before, but now we have a dedicated place where you can check for the latest state of the game. As you can see there's also a new public roadmap that shows what features are still to be implemented, and approximately how long each might take.

Screenshots on the home and media pages show many of the game's features, most of which have been previously covered on the development blog, though anyone just finding the game wouldn't have an easy time browsing them across blog posts. Now they're all conveniently located and captioned, including even one full-sized gif (gfycat mp4) of gameplay action.

There is a good amount of media to pore over, which while feature-wise is fairly up to date, was actually sourced from a relatively small slice of the game. World design is one of the major unfinished areas of development, so most of the images were captured from a few early game levels (albeit sometimes using out-of-depth mid-game weaponry). I guess that's not too bad since I don't want to spoil too much, anyway.

The site will also get a new forum shortly before the first playable version is released.

For the website location I decided to stick with a sub-directory of the Grid Sage Games site, as there isn't any significant SEO advantage to having an additional/alternate site (and more importantly, someone already took "cogmind.com", the domain with the highest name recognition). In any case, a Google search already lists my own site(s) as the top results for "cogmind".

For those interested, a press kit will be added to the website later. It's not essential just yet, and most of the same information is easily found on the new website, anyway.

Since beginning Cogmind development in earnest last year, I've limited "marketing efforts" to what I consider the first stage of exposure.

This stage targets the core audience, in this case existing roguelike players. They're fairly easy to find on the web since the community is small and concentrated. I haven't made an effort to spam every potential location I know of, instead sticking to those where I already have a presence: select forums (Bay 12 Games, Rogue Temple/Rogue Basin) and subreddits (/r/roguelikes, /r/roguelikedev). A large percentage of these players are likely to appreciate, or at least understand, the game at an early stage, and may offer useful suggestions for mechanics or content. (This was especially helpful for improving the prototype/7DRL back in 2012.)

Stage 1 also puts the game in front of other game developers (notable locations: TIGSource and /r/gamedev), who can see past the unpolished nature of an alpha game and offer feedback from a developer perspective that might aid development. (Incidentally, there's a lot of overlap between game developers and roguelike players, certainly more so than with other genres.)

This stage offers the best chance of a stress-free opportunity to learn what players like most about the game, and what areas are best emphasized in later stages of exposure that will reach a broader audience. "Stress-free" is important, because unlike companies with their own PR staff, solo devs have to deal directly with the general public. When projects are a personal long-term investment of sweat and blood, it can be difficult to avoid taking non-constructive negative comments personally. Game development is hard enough already without anonymous trolls adding to the pressure.

Cogmind's new website marks the transition from stage 1 to stage 2, in which we expand exposure beyond the core audience to indie game enthusiasts in general.

I was going to wait until releasing the first video before entering this phase, but at this point I need a little feedback from the "general non-roguelike crowd." A Kickstarter campaign would've served as a good litmus test for much of what I want to know, but since that no longer seems logistically feasible I've decided put the game on Indie DB early instead. Although we don't have a video yet, at least there's a better supporting website and plenty of media showing off various features. Aside from general opinions, I'll be looking specifically at the demand for sprites. First we need to let Cogmind attract some more attention over there, hopefully more than just the core audience.

The last stage is full exposure, to come once we have a trailer and the game provides a solid playable experience. (Before reaching this stage there might be a teaser trailer and pre-alpha releases, depending on the pace of development.) This is when Cogmind will find its way onto Steam Greenlight, and aim for greater reach through gaming media outlets.

Steam will pretty much be the ultimate test that makes or breaks the future of Grid Sage Games, so it must be done right, and we can only hope that there's enough interest and support out there. (If we were a multimillion dollar corporation we could take a crappy game and generate that interest--but we're not ;p. Plus that's just wrong.) The fact that there at least wasn't any significant negative reaction when one eager fan posted Cogmind to /r/gaming a while back is very promising. Of course roguelike fans are looking forward to another cool game to play, though how this game will be received outside our little community is unfortunately a lot more important, as it can only be continued as a commercial project.

Might as well use this opportunity to take a look at our analytics history here at gridsagegames.com. The site has been active for about a year now, during which it's received a little more than 50k total pageviews. I pay more attention to session counts rather than pageviews--the latter would technically be higher if I hid article content behind summaries, but I prefer to have the blog show many of the most recent articles at full length so there's no need to do a lot of page clicking.

Overall the average number of sessions since the dev blog went live has more than tripled, rising from about 850/month to 2,700/month. This is all stage 1, so in that time I haven't changed the outlets receiving updates. You'll notice a few spikes though, where Cogmind was picked up by a major news outlet or Reddit, which definitely provided an influx of permanent followers aside from those we're gathering from the usual outlets.

On the daily graph you can see how big some of those individual spikes were. The many little peaks along the way are me posting a new article.

Most of this data is the dev blog, since the rest of the site has been pretty minimal before now. Site activity should increase somewhat now that the new Cogmind site actually has some decent content that differentiates it from the blog.

A little bonus chart, though not really a very surprising one: 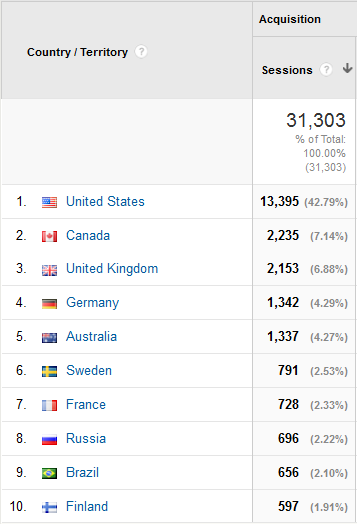 The dev blog and Cogmind itself are in English, hence the readership country distribution.