First minutes of gameplay with our new aiming system!

Today we have the first minutes of gameplay for you! Be prepared to see the new aiming system in action while fighting with an archer against skeletons.

During the first alpha test: All you needed to do was face towards a foe and hit the trigger and your character aims to that target. We had a lot of feedback that said that many of you wanted to aim for yourself. That is the reason we have change it! This will allow fights to feel more engaging and not entirely on just kiting (Firing while walking away from the target to keep your distance) the mobs.

The visual changes are that you now have a crosshair at the center of your screen. Your shots will follow that point at the time of firing so if you're moving around a tree, taking a corner, or going behind cover you may become an expert at shooting walls. 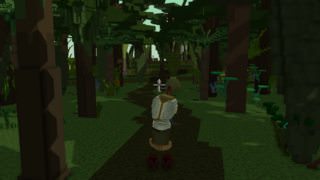 Archer shooting in direction of the crosshair

The other downside to having to aim for yourself is that we will be adding flying creatures in the future that you will have to fend off. This will more than likely make them much harder to hit. Be prepared Archers and Mages to help your Melee friends!

PS: Our ranged monsters have voted that they still love the auto aim system, so expect them to be lethal if you're not dodging!

In our last update, we gave you a very technical look at optimization and how the system uses a pipeline to build the random dungeon.

Today you can see how it look ingame. Also we’re walking through the jungle and fight against some skeletons.

This is only one of the many dungeons that will come in the future, we will be adding new types of rooms, different dungeon types like mazes, and many more foes for you to face including bosses. We know that variety is needed to keep things interesting so we are working hard to make the dungeons something that will be dynamic and different each time.

We always want to hear from you! So if you're looking to reach out to us then the best place to chat with the developers and other players, who are interested in the game, is on our Discord. Maybe you're interested in sharing room ideas for the dungeons, some tasks that could be solved for a quest or maybe you have an idea on how combat can be improved... Whatever your reason is, we would love for you to be a part of our community.