Thanks a lot for your time, After looking at the data I've gathered from the poll and asking people around I've reached to a conclusion.

Time to move on~ 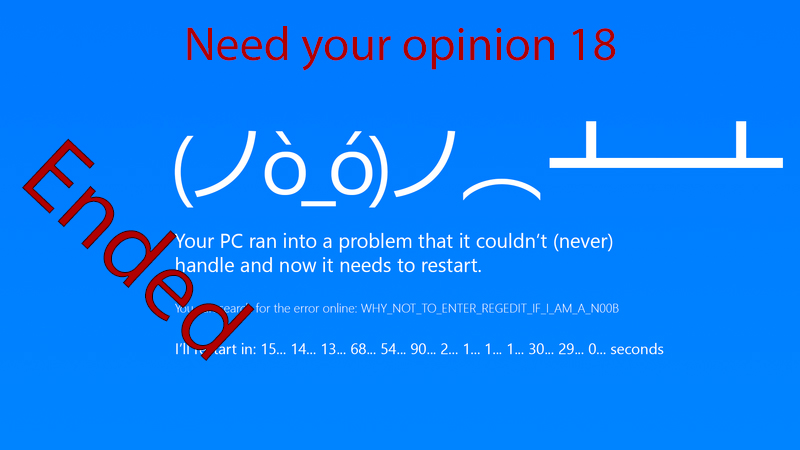 Thanks a lot for your time,
After looking at the data I've gathered from the poll and asking people around I've reached to a conclusion.

Even though the majority of the votes went with option 1 (Reduce Travelers' mess Mechapedes production to be identical to Scrin/Reapers) and 4 (Keep things as they are), I kinda still thinks that option 2 (Removed the AI ability to use Reconstruction Drones and reduce The Swarm radius on the map) is the best one for now as it solve the core issue while keep the original gameplay,

Talking with few people made me realized that while I'm sad about removing new features I've added to the AI, I'll feel more unhappy about knowing they're causing random crashes on custom maps, so even though it's kinda against my ways, I think that I will go with option two and will remove the AI ability to use Reconstruction Drones (which it hasn't used in vanilla anyway) and reduce The Swarm's support power radius to be like vanilla (which won't cause much of a difference in game and only affects the AI),

But before you start rage quit at me, listen up xD,
What I'm mostly think about doing is to give that approach a try, so in other words next version will include these changes but if I will see that people won't be fines with it I will reverse it back to how it was.

I'm mostly sick of testing the mod for two weeks by now and want to move on and add new things, so I have to find a conclusion for this issue even if it's temporary.

Really thx for your help and I hope you understand where I'm coming from ;)

Dont spend all your time in developing the mod, because eventually you will get tired and start to hate you work because it makes you feel bad and you will abandon the development. i saw a lot of great mods abandoned because the work was too much or they tried to change a hundred things about it.
Make time for everything, including things that you enjoy. And yes, hear us, but do what you thing its best so we can see improvement in time.

Thank you for your work! your mod for kanes wrath is in my top 2

That's actually the reason this mod was in dev for almost 6 years, I always go in and out and work slowly on things that I know to take a lot of time either way ahah.

Thanks for your support though, for something I was into for half a decade it means a lot to me ;3

And the results are really outstanding, this is one of the reasons why we are interested and hyped with this game. So keep it up!!!

If your decision is to keep an aspect of the game stable by reducing crashes on custom maps. Your decision is valid because, without a stable mod, there is no mod AT ALL.