The past week or so we've spent working on a lot of the "little things" in Nauticalith. Things that may not be immediately noticeable, but contribute greatly to the overall atmosphere of the game. 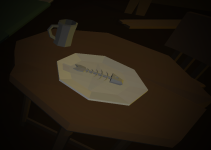 The screenshot above is a simple example of minor props that add some flavor to the game. In addition to the simple layout pictured above, utensils and other small props have been added to the game.

One of the more noticeable changes is a big revamp in the UI system. With Unity moving onwards to a new UI solution, we've shifted all our in-game UI over to the new system. This includes the addition of new features such as drag-and-drop inventory and consumable items.

The seagulls that were hinted at in the last devlog have since been scripted and implemented in the game. They will travel great distances across the ocean, occasionally passing above the player and around various islands. Although they have no direct impact on gameplay, they certainly make the previously uninhabited world feel more lively.

The final thing we've been working on is a large update on the entire world controller. Date, time, weather, day/night cycles, global lighting, and more are currently being updated and improved upon. This will more easily allow us to add or modify things that affect the entire world going forward.

We also found the time to take the game to it's first public showing since the game jam version was released. A number of players got to try the current build and the feedback was very positive so far. In the future, we'll have more events both live and online to get early builds in the hands of a few players and testers.

Do the seagulls gather around your boat and follow it out when you depart the shore? If not, that would add alot to the feel. Cheers!

They do, they have an AI that basically prefers to turn towards the character the farther they are from him. This means that they will stay near him, but follow random paths generally passing over the player, going a decent distance from him then turning back towards him.