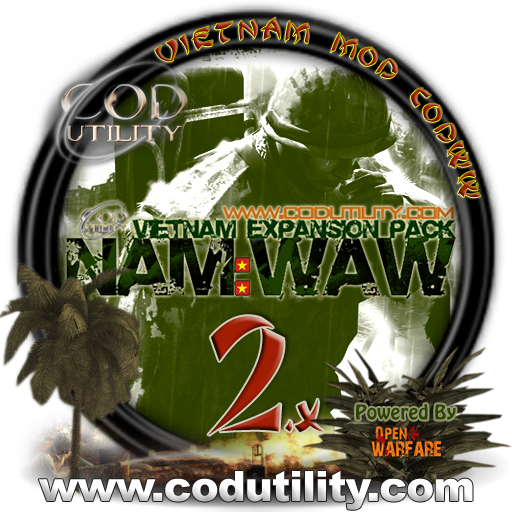 Get the mod here and additional info: Codutility.com

-NOW INCLUDING CUSTOM CLASSES/RANKED WITH IN GAME CUSTOM CLASS EDITOR AND ALL WEAPON ATTACHMENTS INCLUDING 4 NEW MAPS FOR THE EXPANSION PACK
-TWO THEATRES OF WAR, US ARMY vs VIETCONG and AUSTRALIAN TASK FORCE vs. NORTH VIETNAMESE ARMY

.Class movement speeds
.Perk ammo limitations
.Drop weapons for pickup settings
.Binoculars ( apply to all classes )
.Check if the player has at least one frag grenade left to activate Martyrdom
.Forces players to have a pistol and pistol ammo to go into Last Stand mode
.Players going into Last Stand can be revived but they won't have any weapons

.Control whether players will bleed when taken damage
.Percent of health a player must lose before bleeding begins when bleeding is enabled.
.Displays a bleeding icon in the middle of the screen when player is bleeding

.Enhanced Movement Control
.Forces the player to crouch on spawn
.Delay the ability to sprint on spawn for certain amount of time
.Disable or Allow players to jump. Players can still mantle over things when disabled.
.Percentage of sprint time that will be deducted from the player with each jump
.Sprint time in seconds that the player will be allowed to use without resting.
.Time in seconds to recover 1 second of sprinting time
.Time it will need to pass after a full sprint to start recovering
.Percentage to reduce overall player speed after a full sprint
.Allow the players to move without ADS without counting towards sprint time.
.Control the pulse of the player after taking damage or sprinting.
.Control the amount of sway in the pulse system. The pulse system will calculate

.Enable or Disable Hardcore
.Moves the progress bar during objectives completion
.Show a message on the screen when a player joins a team or switches to spectator
.Enable or Disable global chat
.Show the player a message with his/her GUID the first time spawning in the game
.Relocate the chat position at bottom left corner - use only in hardcore
.Control if hiticons should be shown to attacking players when causing damage to an enemy.
.Control if a special hiticon should be shown to the player attacking an enemy who is using the Juggernaut perk.
.Show names on enemy players
.Show names on friendly players
.Distance in inches to a friendly player to be able to see his/her name
.Show the death icon to players in the same team (NON-HARDCORE)
.Show the red cross hairs on screen when pointing to an enemy (NON-HARDCORE)
.Show the grenade indicator on screen (NON-HARDCORE)
.Show the mantle hint on screen when approaching an object than can be mantled over
.Show XP points gained during the game in the middle of the screen
.Show the center obituary message showing the attacker or the victim's name
.Control which type of obituaries should be shown to all the players in the server
.Control if extended obituaries should be shown to the killed player.
.Sets which type of unit should be used for extended obituaries
.Show the game scores on screen (NON-HARDCORE)
.Show the stance indicator on screen
.Show the mini-icons in the minimap indicating objective positions
.Show the world icons on the screen indicating objective positions
.Allow the minimap to be shown in hardcore mode (HARDCORE)
.Force the compass in hardcore mode
.Show the mini-icons in the compass indicating objective positions with their distance
.Show enemies in the minimap when firing a non-silenced weapon
.Control if the players' screens will be blacked out or not when dying.
.Control if the player's black screen should start fading out after certain amount of time.
.Enable the head bob when walking, running,and sprinting.
.Show blood splatters on the screen when the player is damaged
.Show a special blood splatter to the player when shot on his/her head
.Show a special blood splatter to the player when killed with a knife
.Draw the team icon over teammates' heads to quickly identify them as friendlies
.Control the inventory disaply in hardcore mode showing grenades, special grenades, explosives, ammo, etc
.Control the players' status on the scoreboard so players can't see which players are alive or dead.
.Control team status display so players can see how many people on their team
.Hide the scores, from the scoreboard while playing but not in the intermission screen once the game finishes
.Play the game in 3rd person view. Players will automatically switch to 1st person view when aiming down the sights.

.Control if the new occlusion sound should be enabled or not
.Set if announcer will say "Tactical!" at the beginning of the match
.Play countdown sounds at a given time value.
.Play the stock headshot sound when a player is shot on the head
.Play Unreal firstblood sound
.Plays Unreal headshot sound
.Killing spree sounds
.Enable or disable battlechatter

.Control the type of anti bunny-hopping that should be enabled
.This variable controls if the player's view should shift when going prone and firing the weapon.

.Control if anti-camping should be enabled
.Control what kind of cue should be shown to the player to indicate camping
.Custom message to display to the player when camping. By default a localized string
.Distance in inches a player needs to move to not be considered camping.
.Time the player has to move the distance set in scr_anti_camping_distance

.Bind a key for the Advanced ACP. Controls > Multiplayer Controls

.Variable that controls if virtual ranks should be enabled or not
.Virtual ranks are ranks that are assigned to players when they connect to the server based on their name.
.Abbreviation contained in the player's name and the rank to be assigned based on it

.Title to be displayed in the Welcome Screen. By default it uses the server's name.
.Lines to display in the welcome screen (up to 8 lines of text)
- SERVER MESSAGES
.Dispaly the messages to the players only when they are dead
.Show the name and gametype of the next map in the rotation.
.Delay in seconds between messages
.Delimiter to be used for line breaks
.List of messages (there's no limit in number of messages)
- SERVER BANNERS
.Delay in seconds between banners
.Time the banner will be shown
.List of banners (there's no limit in number of messages)

.Enable the reserved slots system
.GUIDs with their respective priority
.Clan tags that will get an additional priority
.Server IP address where players being disconnected will be redirected to

.Scorebot updates certain external variables with the game status so the game can be monitored from an outside application or displayed in a web page.
.String to use as delimiter of values in the scorebot functionality

.Force players to select autoassign by deactivating the Allies or Axis options
.Clan tags that will be allowed to pick team
.Switch teams at halftime
.Enable team balance
.Show a message to the players letting them know that autobalance will be executed
.Interval in seconds between team balance checks
.Time to start the autobalance process after showing the message to the players
.Clan tags that will be excempt from auto-balancer

- CLAN VS REST OF THE WORLD SETTINGS

.Team that "rest of the world" players will be forced into
.Clan tags that will be allowed to pick team

.Duration of the punishment (some punishments do not use this time)
.Controls whether multiple teamkills using grenades or explosives should count as one or not

.Controls whether or not the killcam should be shown when killed
.Level of gravity in the server
.Time the server will wait for players on both sides before starting the game.
.Time the server will wait to start the match
.Time to wait to allow players to change their custom classes or look at the scoreboard once the game finishes before loading the next map.
.Enable game forfeit when all the players in one team disconnect from the server.
.Play music during the game
.Allow the announcer to speak during the game
.Enable the antilag routine inside the game engine (use when players with a huge difference
.Variable that controls if the Big Brother Bot Power Admin functionality should be enabled or not. You must install the B3 program (www.bigbrotherbot.com)
.Enables the ability to use test bots for testing