A new video of the recent 3D Sprout's Tale as well as progress or lack of thereof on the game due to lost content.

Last week was quite a week. In a short time, a few days really, a lot managed to make itself happen. Some of it good, some of it bad.

Let's start with the good: Trademark. Things are looking mighty shiny! Sprout's Tale is officially registered to Decade Design LLC. That means I'll have to start going through all the blog posts and forum posts and reddit posts and all that jazz and changing the names of things to Sprout's Tale. A tedious endeavor, to be sure, but a necessary one.

Also! I'll soon be changing the url of this blog from sproutthegame.blogspot.com to sproutstale.blogspot.com Please prepare yourselves!
We'll redo the logo once we have the grass and tree growth ready for show. I consider it fairly low priority.

Speaking of redoing things! Last week poor Rossy had quite a time having to basically redo our entire project after our shared Dropbox version had some kind of catastrophic meltdown. And, me being the moron that I am, had not backed anything up! Ack! As the title suggests, the mistake was so avoidable it just fills me with self-loathing to think about it.

Lucky for us, Rossy was willing to save the day. The two of launched into the thing and he shouldered the majority of the technical stuff. He's quite the hero, you know. 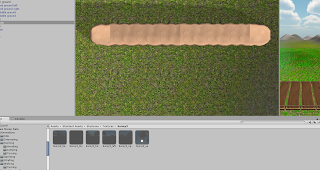 Anyway, lesson learned. We back things up now.

In other news. I found some time to fix a couple of minor issues. In the picture on the right you can see some weird coloring issues occurring on the terrain. Well, that's been taken care of! We've also added some beautiful little rocks to the terrain laid out in the style of an old ruined path. Murilo honestly never stops impressing me with this stuff.

You can see in the video below that I've started putting some of his stuff to use. The tree from the old 2d version is in there, though the leaf area was too high-poly and couldn't be included. We've also got some stones and a placeholder stone rectangle object that is put to use by the fairy. This is the first glimpse you'll actually get of why we have included the fairy. It isn't a final version of this scenario, since eventually the player will be able to push the box himself, but you should get the gist of it.

Matt's done fantastic work on getting this fairy up and running and working. A month ago, she was just a words in a design document. As usual, he's come through in a big way and, while she isn't modeled yet, I can't help but find that floating piece of un-textured sphere the most beautiful fairy since Fern Gully.

We're all currently in the middle of working on the Grass and Tree growth systems (both of which are causing a lot of head-scratching), but I really really really hope we'll have something from one or both of them to show within the next week or so. Once we have that much, we'll start to seriously be able to put together the game. Very, very freakin exciting.

Er, please don't forget to share and Like and thumbs up and all that social media jazz that makes us feel good about ourselves!

Glad to hear you guys are making progress with the game. The name change was a bit of a "grrr" and the "avoidable disaster" happens to all of us at least once in our careers and that's why it is so commonly said to "make a back up". Don't beat yourself up too much over it but hopefully you have learned from it and will make 250% sure it does not happen again.