Sprout's Tale is the story of a mysterious character's journey through a beautiful and dangerous world. As the player, your job will be to lead the hatted hero through a series of obstacles that range from the mundane to the deadly. With a bit of magic, your only tool against the looming darkness will be Life itself. Plant trees, grass, flowers, and more to keep the end at bay.

As you progress, you will find friends with unique abilities to help you along the way.

Back After a Long Break

Lot's of progress. We've got levels 1-6 pretty much in the bag and uh (look at the gif now), they are fun.

It's a slow build, though the first level is scandalously short. It's just a controls tutorial basically with some minor obstacles. Jumping running walking dodging. That sort of thing. Then we build. Each level introduces 1 or 2 new features (except Levels 3 and 6 which are just kind of explosions of all the features.

Also built a very simple Menu screen that can stand in for the demo (which will be levels 1-5), and while it isn't perfect, I think it's not too bad!

The game's gotten pretty hard as well, so I've had to insert a much more traditional checkpoint system. This is a little bit of a disappointment to me because I really liked the idea of having to grow trees as checkpoints, but .... well, you'll see.

We also got a new texture that's making it a lot easier to recreate the kind of blurry hopelessness that I think we get to see in the last two paintings of Voyage of Life. I'm really, really happy with how this has turned out and the game is going to parallel the paintings very nicely. 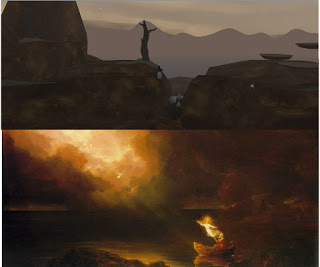 I've also implemented a system of finding hidden collectibles, which gives this *really* satisfying chime whenever you find one. Here is a picture of a found collectible, though ultimately I've decided to go another way with the collectible itself. Instead of lines from poems it's going to be... well, you'll see.
All in all, I'm just really happy with how it's coming along and I can't wait to have people start telling me how terrible it is.

Finding collectibles isn't too hard, but some take
skill to reach.

Creating a Sense of Change

Drawing on personal experience, we detail how using the mechanics of Sprout's Tale gives the player a feeling of magic and power over the environment.

The 5 Most Important Lessons I've Learned from Game Development

Sprout's Tale has been a huge, eye opening experience. These are the things I've learned while working on it.

In preparation for finally going public with a demo, the team is working hard at trimming away some of the bugs and glitches and oddities still found...

Showing some of the old stuff and how it looks using the stuff we have today. It really shows how far the game has come.

Maybe there could be a moonwalking monster!

Wow this looks great! I like his hat. Good luck, and tracked.

Thank you Smithler! Hope we can keep impressing you somehow

It is really looking good! Keep up the great work and I look forward to the end result.

The game looks pretty good. Does the player have any control of the camera while playing? (also tracked!)

Player does not have any control of the camera right now. Once we get into the "tweaking" stage of development, we'll fix some of the camera issues so that relevant stuff is always visible in an area.

I really like the looks of this game. The camera movement in the video feels.. a bit stiff though. Will definitely vote for it if it gets on Greenlight.

Interesting. Thanks for the feedback. We'll make some little tweaks to its movement and I'll try to remember to message you when we've (hopefully) fixed it. :)