Hello everyone, after our long hiatus we are back and have quite a bit for this, the last one for 2010, update. Much of the mapping progress happened this week when I pull a few dis-jointed all nighters. That said there was not very much major progress, no maps have been finished as of yet, but we do have some new screen shots and a new WIP map to show off. Let's start with the screen shots first: 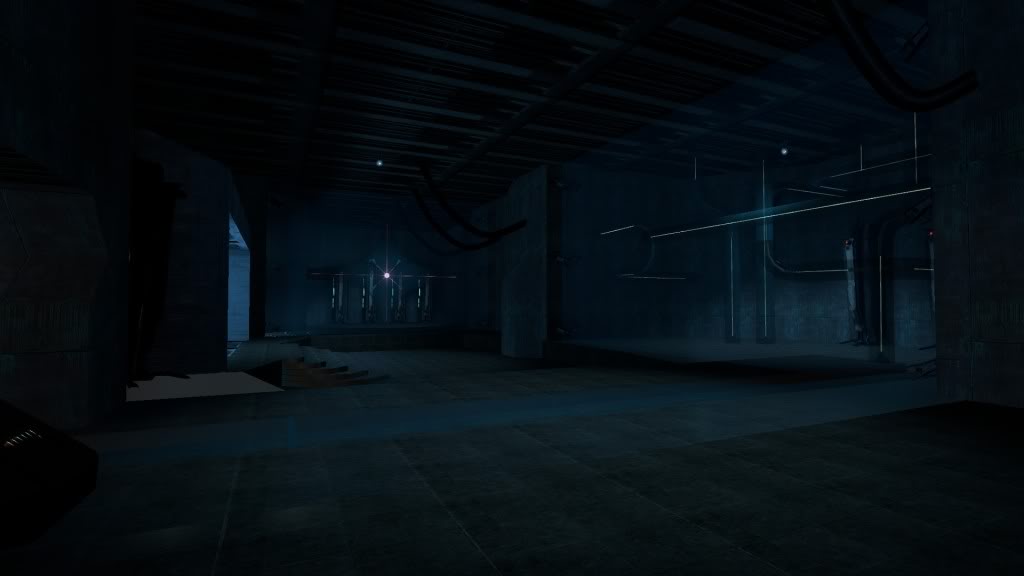 I added a few more generators and did a bit with that wall section in front of the teleporter pads in this section. 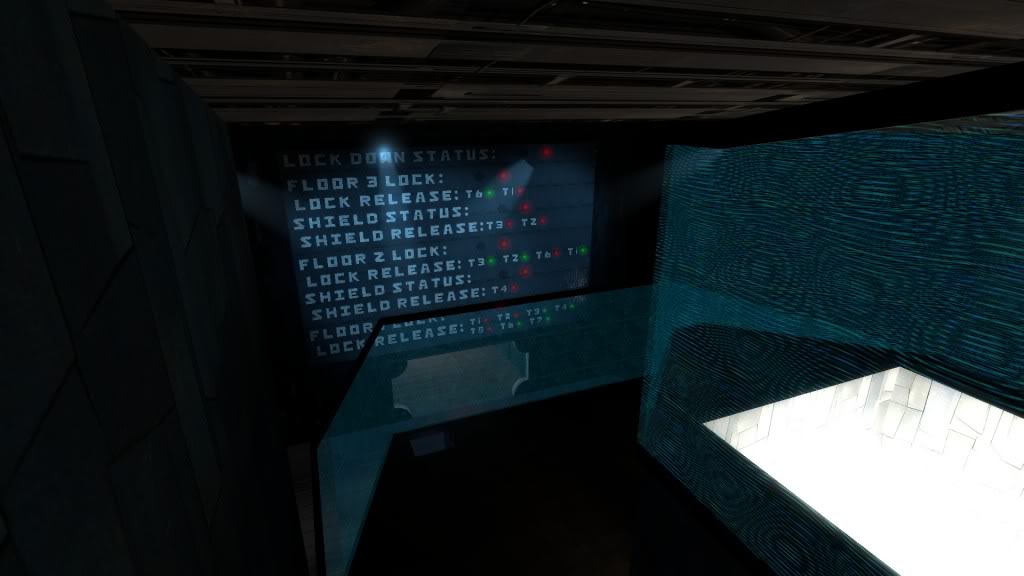 This area got the most attention from me this month. All of the rooms (not shown) now have doors and I added in the teleportation chamber (also not shown but the entrance to it is; under the Lock Down Status board). Structurally this map is nearly done, I need to fix a few things toward the beginning and add a couple of touches here and there. 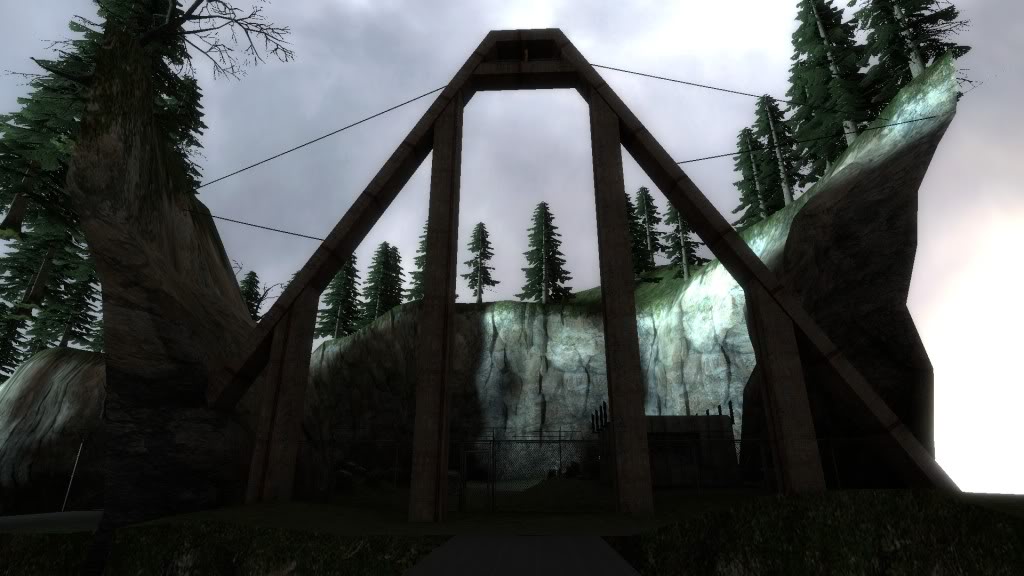 Been a while since I worked on this map and a few nights ago I had a flood of inspiration for it. I will be overhauling much of the middle section of this map. The player will be taken on a trip through the mountains instead of just around near the river area. They will then come out near the damm in the third section of the map. Shown in the screen shot above is a support truss for the bridge coming from the first area of the map. Still have some work to do on it and the mountains around this part as they will be changing quite a bit. 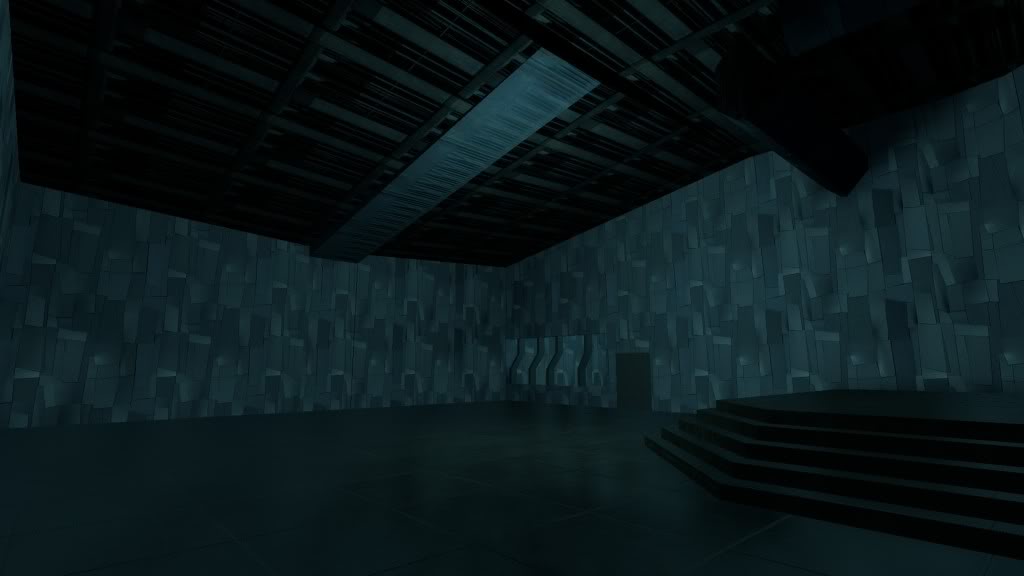 And for the new map. This is the entrance are for the second Underground area. Just textured it today, rushed it a bit, so I know its not the best looking (and the lighting is waay off). I wanted to try a few things with this room, the area you see kind of towards the back is an armory, there is a dispensary on the opposite side of this room as well, that the players will have to find a way to access the computer system if they want to heal and gear up.

Well that is all for the screen shots.

Armor
If any of you follow the Source Coding forum over at Steam then you might have seen a couple of my topics. Basically my goal for the SRC this month was to create an entirely new health object. The original way that energy was handled by Valve seemed, while awesome for HL2+, lazy in light of where this mod is going as far as the HEV suit is concerned. So I wanted to make a proper armor object and change how the energy effected damage and such.

After a lot of tinkering I finally got it done. I will post a video in the Gameplay Update showing how Armor and Shields (aka energy) behave now. In short, shields will soak up all of most of the types of damage. Once the shields are gone, or if it is a damage type they don't protect against like radiation, the armor takes 75% of the damage and the other 25% is passed off to the players health.

High Explosive Fragmentation Grenade
I am mentioning this because I fixed a problem where using a regular grenade would also deplete the amount of HEF Grenades carried.

Iron Sights
I inadvertently broke this somehow while modding the HEV Upgrade system. Will be fixing it later though as it is not really a game breaking problem at the moment unless it is used (causes a crash).

HEV Upgrade System
I added Armor and Shields to the upgrade panel and in the UP code. Was unable to get it to actually work in time for this update, might have a new HEVUs video next time around if I get it working.

Alright, next up is the HUD. I was kicking some ideas back and forth in my mind of the last few months and I finally got around to drawing up a HUD design. This is just a preliminary example, I will likely change it many times before it is finished but all currently planed HUD elements are shown. 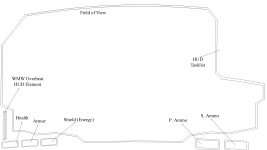 Most of the titles are self explanatory but WMW Overheat is not. During the update I made at the beginning of the month I mentioned White Matter Weapons. I will go into detail about these now.

If you remember from the back story, the Combine found a new source of energy, White Matter, and had supposedly been experimenting with it to make weapons. Well we will feature several of these weapons in the mod. I have no details about what these weapons will look like or do, but they will be pretty powerful.

For balance reasons I was trying to figure out how to make it so that these weapons do not make the game too easy and I thought up of this system while playing Mass Effect 1. It would be a similar system where each shot causes the weapon to grown hotter till at a certain point it would overheat. Except in my version, these weapons would explode or short, causing damage to the player and leaving the weapon unusable for a certain amount of time. How much damage has not been decided yet.

Here is the video that I mentioned earlier for the Armor/Shields changes:


Well, that is everything for this update. Thanks for following CI and we will see you next year, have a happy and safe holiday!

Coming along very nicely Geowil. The level of effort and commitment going into this project is admirable. Also, fine job with the armor object !