Hello everyone and welcome to our latest progress update. I made some progress across multiple fronts this development cycle but perhaps less than I was hoping to achieve. Most of the work went into the source code this month as I tried to figure out why the overheat penalty was not working, getting an HUD element for the overheat, and adding overheating to the weapons that I originally planned to use it on. I did get some mapping done though and that is what we will get into first.


This month was predominantly a code month, that being the case I did not get much time for mapping but I did start on an expansive update to the Graveyard and also continued work on the Stranglehold map. 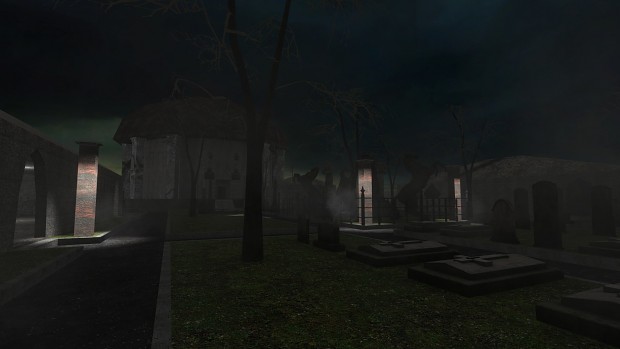 While this looks exactly like the same shot from the last update there is one small object that was not present before an and it is hard to see in this smaller screen shot. In the background there is a power pole near the mausoleum. The next screen shot will explain more. 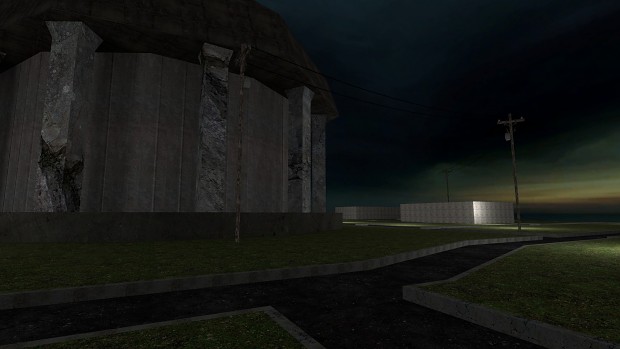 In an attempt to try and figure out what to work on after I had completed my work on Stranglehold I thought of the graveyard and decided to make it much larger. This is but one small area I will be adding onto this map, both above and below ground. This area was needed first because the power required by the lighting and other devices throughout the graveyard get their power from here, hence the power poles.

I am still working on everything back here and the buildings you see are there as placeholders so I could cut up the ground area and place in the walkway up to them as well as have visual guides for later on. There is another section behind the Mausoleum that you cannot see from this screen shot. Also I am not sure why the fog is not rendering back here as the brush entity covers the entire map. I literally compiled these maps a few minutes ago so I did not have time to check it out. 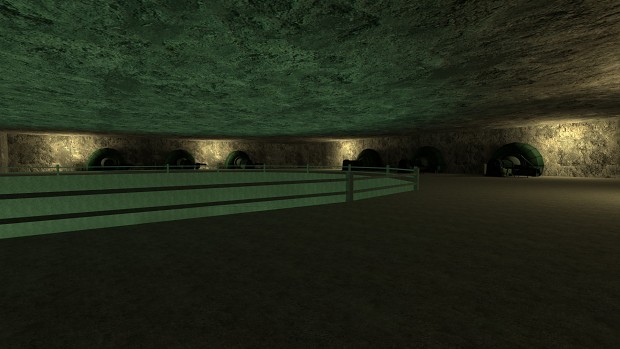 Here you can see the start of a new area in the Stranglehold map. It is fairly empty right now, I realize this, but with time I will start to flesh it out more; this is just how my process works, slow and steady while incorporating user feedback and new ideas I have along the way. If you are wondering that that hole is for, continue to the next screen shot. 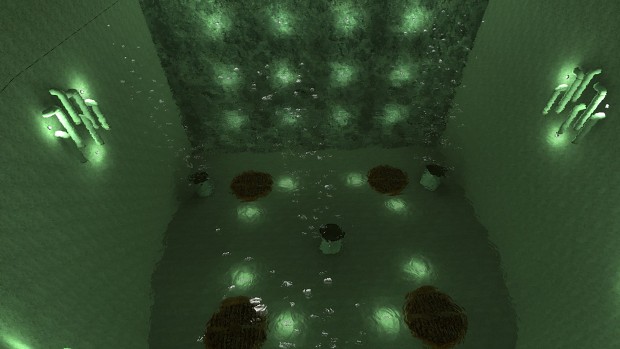 So, my goal with this section was to make something that could appear unsettling or at the very least give Half-Life old hats some pause that a super worm might jump out of this holding tank at them and try to skewer them with it's face blade or something similar.

What this is, is a coolant tank for the power generators you see in the previous screen shot. The pipes on the walls carry the coolant through a series of buried tubing to the generators and then whisk it off deeper underground where the heat is absorbed and bled off and the coolant is returned through the concrete tubes you see at the bottom. Air bubbled are injected into the stream so that technicians can easily tell if any of the underground pumps have stopped working.

The lighting is so that techs can easily spot if anything may be in there that should not be and that could cause a blockage with the system as well as to make it look creepy. The large drain looking thinks at the bottom are, well, drains. They are used to drain out the coolant every few years so it can be replaced.

I had to go in and fiddle around with the VMT settings in a water texture to get it clear and see through like you see it now. If you jump in though you are immediately greeted with a black wall of nothingness because the draw distance is severely limited. Still trying to figure out where I can change that at.

That is everything on the mapping side.


The HUD and src updates are interconnected for this progress report. I will have the video for the change(s) at the end of the src section. What I added in was the an Overheat bar along the same lines as the other health interface bars.

That is really all that must be said about it.


As mentioned above most of my time was flooded into the source code this month. As a result I fixed one problem and was able to complete, or almost complete, the overheating system. The problem, as you may recall, was that the overheat penalty timer was not working and so weapons stayed overheated indefinitely. Well I fixed that and also did a bit more.

The problem stemmed from several places. First I was not adding nor dissipating heat via the weapon's information. That was the first thing I fixed. It would have been a problem if not for the second problem area. The if/then/else structure I had setup was inherently flawed in that it would constantly reset the overheat counter once a weapon had overheated. To fix this I added in a new bool that is set to true once a weapon has overheated and using it along with a revamped if/then/else structure I have fixed all of the problems and the system now works as intended.

I added two new variables to the weapon info, heat accumulation 1 and 2 (not the exact names but more understandable). These are used to add heat to the weapons. The second one is for the shotgun alt attack.

I also added the code to get the following weapons working with the system: Pistol, 357, AR2, SMG1, and the Shotgun.

Here is the demonstration video:


And finally here is the VLog video that basically recaps what I just typed out here but also goes into more detail within the code:


So that is everything I managed to do this cycle. It was not much in some areas and a lot in others but I would have liked to see a bit more movement on the mapping front. Hopefully there will be more of that in May since I am pretty much done with the code for now save for adding the penalty timer.

In any case thanks for reading, watching, and following the project and I will see you at the end of May.

it would be cool if when the pistol overheats the pistol goes into the empty animation with the slide back then just add smoke coming from the inside then after it cools have the slide of the pistol move back into position. With the Revolver have the animation play where you open the cylinder to reload but lock it there with smoke emptying from the inside, then play the close and spin animation after it cools down. With the Smg just add smoke from the bottom barrel, with the shotgun the pump animation could pause mid pump and let smoke empty out then finish the animation. With the AR2 the reload animatio ncould be stopped midway between disks which would reveal the orange inner barrel which could let steam out, then play the reload animation backwards from there so after it cooled the same disk would be reinserted.

Hope this helps a little but other then that good work!

That is on the drawing board. I am going to try and figure out how to call specific animations from the code so that when the weapons overheat there is a visual element to the actual weapon to indicate that it can no longer fire.

I may also, as I venture into modifying the firing animations, try and add the finer details (smoke for example) then.

Thanks for the feedback/suggestions.