Special thanks to everyone who took part in this year's contest.

Well, another Mod of the Year event is done and dusted. It's been the biggest (and most work-intensive) one so far in ModDB's history and hopefully we can keep adding to it in some way every year. This year's event spanned over a week and a half gradually revealing the awards. What many don't know is that MOTY 2008 was the culmination of months of planning with about 2 and half weeks of sleepless nights spent gathering footage, video editing, recording voiceovers, writing news posts on top of all our other regular duties. Special thanks goes out to the following people, without whom this year's MOTY wouldn't be possible:

To all the sponsors that want to support the modders and indie developers we thank you for your participation.

Thanks to the winners for making such great mods that we can all enjoy. Finally, thanks to all the gamers and developers out there that have helped ModDB grow and MOTY become an anticipated event every year for thousands of people. These awards are meant to celebrate the modding scene as a whole and put it front of more people who aren't aware of its existence. Regardless of any awards or prizes, all mod teams should strive to do what they're doing not to win a contest, but because they share a passion to develop and change the game. 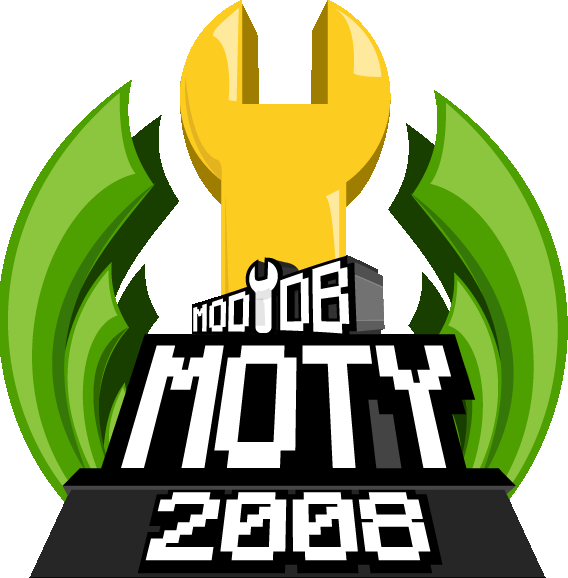 It was great, apart from the intense discussion at upcoming moty player's choice.

Good job to all those people :)

But what about Ryan Anderson AKA stenchy? We think he also deserves a big thank you and congratulations on all of his hard work and health sacrifices! Don't you people agree....

You're too kind, sir. I've been sick for 2 MOTYs in a row - I think its going to be tradition now.

I had to double check that.

Good job guys. Looking forward to next year already. Apart from the waiting, I enjoyed it very much :)

You forgot yourself buddy! I'll add ya!

Ryan Anderson AKA Stenchy: The scribe behind the words of ModDB, eloquently taking us upon finely worded journeys into the deepest and darkest realms of modding. Stenchy is the man who gets the job done, keeps the shizzle together, and cracks the whip when Henley starts lagging behind on them sexy videos! Together, both he and Dave sprinkle the awesome that is... ModDB.

*wipes a single tear from his eye*

That was beautiful man.

Group hugging with stenchy probably isn't a good idea since he may be contagious. Ha ha.

Was an interesting year, the 2009 awards will be even more interesting with some nice titles being released soon (hopefully). Thanks for all the hard work ModDB!

Good work, the first MOTY ive been present for and it went awesome!

Impressive work guys, by far the best MOTY so far. We the developers appreciate everything you do for us and hope that those who forget it's a privilege not something owed to us will not ruin it for the rest. Looking forward to another great year and the 2009 awards.

It was a good year for mods, you guys lured me into to participate in the awards and I had a good time.

Thanks to all that worked on the MOTY stuff, and congrats to all the winners. Let's begin the competition for next year shall we............

Yes. Thanks for another great year of modding.

Pretty great MOTYs this year, thank god they got rid of that horrid English voice and got an official announcer-style voice. Yes, I'm talking to you. ;)

Nice job all round for all of those who organised and thanks to all of the sponsors for putting up the prizes in which ever form the were given.

Great job to everyone involved, we as players have thoroughly enjoyed the awards and I'm pretty sure the developers also appreciate what you've done for them :)

You guys made a terrific work, congrats.

Thank you ModDB! We greatly appreciate your hard work and support for modders.

a bit late, but I agree with everyone else, thanks for your work in making it awesome