This week we show off the SU-76M and its predecessor, the SU-76.

Today we have an anouncement from Forgotten Honor as well as a couple of renders of an important Soviet assault gun, the SU-76 (also known as the SU-12) and it's more sucessful derivative, the SU-76M. 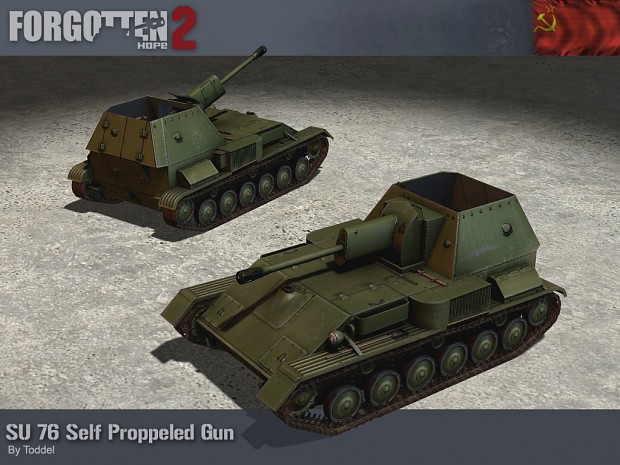 At the start of the war, the Red Army could call on only a handfull of self-propelled guns for infantry support and tank destroying. In late 1942, orders were given for a light self-propelled gun armed with the 76.2 mm Divisional Gun ZiS-3. The winning design was Factory 38's SU-12. This used a lengthened version of the T-70's hull, fitted with an enclosed or canvased roofed casemate at the rear. 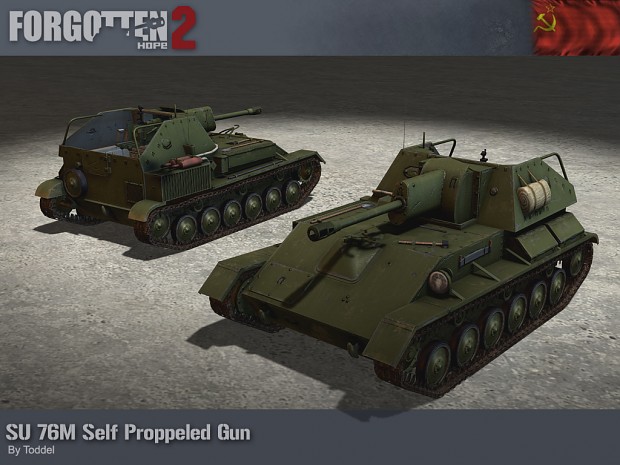 The SU-76 had the same twin engine setup as the early T-70, and the problems this caused were severe enough that production was halted after just 350 had been made. The update to the SU-76M took about 3 months, and involved moving the two engines over to the righthand side of the hull, and lowering the armour protection at the rear. This later change led to the nickname 'bare-arsed Ferdinand', and made the crew extreamly vulnerable.

The SU-76M replaced almost all the infantry tanks in the Red Army. It had such a low ground pressure that it could follow infantry through swamps no other vehicle could, and the large cannon and ease of communication between the crew and supporting infantry made it effective in urban environments too. Both our SU-76 and Su-76M were made by Toddel.

Our winners for this week's screenshot competition is mopskind. You can view the winning submission here.

We are now accepting entries for the week of January 28th. If you think you have the best FH2 screenshot, post them href="http://fhpubforum.warumdarum.de/index.php?topic=16835.0">here.

I really like these "not-so-leathal-looking" tanks and TD's. They won't make me **** my pants when I see them in battle.

As soon as you start getting hit by them, you will.

i allmost "forgot" this one ,nice work guys !

Great that you guys are still working on this! Wonderful progress, and I'm super excited for this year's version of FH2! Right on!

*Its more successful derivative, the SU-76M.

Nope, because the sentence doesn't start there. The full sentence is:

"Today we have an anouncement from Forgotten Honor as well as a couple of renders of an important Soviet assault gun, the SU-76 (also known as the SU-12) and it's more sucessful derivative, the SU-76M."

True, but the full, and correct sentence would be, "Today we have an anouncement from Forgotten Honor, as well as a couple of renders of an important Soviet assault gun, the SU-76 (also known as the SU-12) and its more successful derivative, the SU-76M"; but my point was not the construction of the sentence, it was merely proper use of punctuation. Just as you did not include the full sentence in your first post, neither did I. I assumed you would recognize what I was attempting to do, as you seem knowledgable. But let's not worry about grammar, and instead enjoy these awesome renders. I have my fingers crossed for the Eastern Front in the coming weeks.

I do not quite know where to put this post. I'll explain, I always played the forgotten hope 2 on my computer, I recently got a new widescreen monitor LG Flatron E2050 starting hence the problem started, the game does not work anymore, I tried to update all drivers and software still does not work , so I decided to uninstall everything and start from scratch, but now the battlefield 2 does not install at all, just open the setup screen and then it closes and ends the program without having at least begun the installation of the game.

Please if anyone can help me I would be really grateful.