An interview with our Modeller of Models, our Molder of Meshes! He talks about modelling several of our creatures and other entities in the game.

Posted by HexenEdgeOfChaos on Aug 5th, 2009

Today we're going to wrack the brain of Slyrr (Greg Fisk) about his part in the mod as our Modeller. Like some primordial and forgotten god, does he mold the digital clay for good or for evil? Or maybe just for fun? Perhaps all three -- let's read on and see! 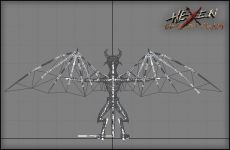 Q: Where are you from and what do you do for a living, can you tell us something about yourself?
A: I currently live in Provo Utah, where I work at PDC doing graphic design and making ads for yellow page phone books. I draw cartoons on the side, and also do 3D models for FPS games as a hobby.

Q: Have you worked on other mods or TC's before Hexen:Edge of Chaos?
A: I worked for a time on the Unreal Fortress mod, the Team Fortress port for Unreal Tournament1. I designed and animated models for them. They had some excellent ideas, like the sniper wearing a ghille that changed to match the texture of whatever the Sniper was crouched on.

Q: What is your role in the team?
A: Currently, I make 3D meshes, animate them, export them to the Doom3 engine and troubleshoot them. I also participate in the concept art, some minor story writing, and I create the AFs (ragdolls) for the monsters. 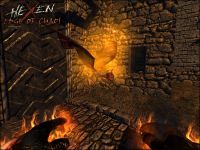 Q: When did you hear first of the TC, and how?
A: I believe it was suggested by a forum denizen in Jheretic and Jhexen community. I had been working for the DOOMSDAY mod in a minor way, making 3d versions of all the sprite monsters for Raven's Heretic and Hexen games. They suggested I look into a mod that wanted Hexen ported to the Doom3 engine...

Q: What style of developer are you? Do you rush into things, or do you plan a lot in advance?
A: A bit of both I think - I certainly don't rush into anything without studying it out, but I also don't like to dawdle. I prefer being a work-horse, and having lots of boundary and structure. A level-headed mod boss who knows what he wants for the mod will get plenty of mileage from me.

Q: What was your first experience with the Hexen/Heretic series, and how did it impact your view on computer games?
A: I started way back in the mid-90s when Heretic first came out. I couldn't say that I'd NEVER seen anything like it before, because it was essentially a medieval version of Doom2, which was wildly popular at the time. But certainly I'd never seen a game with as much atmosphere, and I found the story line much more cogent than Doom's. Ah, memories...

Q: Which game are you currently playing?
A: Half Life2 Episode2, Team Fortress2, Portal, Doom3, Bioshock and Unreal Tournament.

Q: Some modders play the games they mod for on a regular basis. Other modders actually just primarily enjoy modding. Which would you say you are?
A: I like to play the game that I'm modding for, just to see what it's capable of and hopefully cull inspiration. Knowing how the engine works and seeing how it performs can go a long way, and reduce any frustration.

Q: Are you working on any other mods or TC's right now?
A: I'm gearing up to see if I can port my UT2004 models over to the upcoming Unreal Tournament 3. If I can, then I'll certainly try to see how they look.

Q: What do you like best about the Doom3 engine? What would you improve?
A: I like the detail that can go into it, and it seems to run smoothly. I'd like to see the lighting improved. Right now, the Doom3 engine has only two modes: totally washed out or pitch black. There has to be a middle-ground. Beyond that, I'd really like to see id software put more effort into supporting mods for their game engine. Lack of documentation, tutorials and other material have crippled much of the mod community, including us. We've been left to fumble for such solutions as we can contrive. I came from the Unreal modding community, where tutorials and documentation are frequent and plentiful. Working with the Doom3 engine has, alas, been difficult by comparison.

Q: If you could have any new feature added to the Doom 3 tools, what would it be?
A: GUI interfaces! (And tutorials that explain how to use them - EVERY aspect of them)

Q: What part of (working on) the TC do like best so far?
A: The committed core we have are supportive and strong, plus it's been nice to see some of the monsters I've made in game...

Q: Which part of the TC are you currently working on?
A: I design, model, animated and import monster models. I also make some static map models, including artifacts. 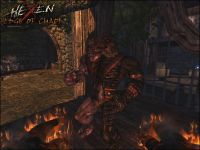 Q: Which is your favorite character in the game?
A: The Ettin - we totally revamped him for the new century, and he's not your grandpa's ettin....

Q: Which aspects do you consider to be crucial in keeping the original Hexen feeling going in this TC?
A: Tough one, but map atmosphere is key. The big thing when Hexen1 came out was that players would spend a lot of time just running around the maps and enjoying the decorations, sights and sounds....

Q: What is the hardest part about working on Hexen:Edge of Chaos?
A: See the 'worst experience' question - answer is the same. Beyond that, hammering through the Doom3 modding tools, which are largely undocumented and unsupported, has been the toughest hurdle, and still is.

Q: Any final thoughts?
A: Don't spit into the wind?

I started to tear up over the memories while reading this.

I live near Provo, woot for UT XD

This is one of those mods I've been following since they announced it, and I can't even remember when that was! But I'm still very interested about it. I still play Hexen 1 at least once a week...

Of all the old-school FPS's, Hexen was my favorite. jHexen added some nice features but Edge of Chaos beats all. I might just shed a tear when it finally comes out.