Again montly summary of what we've been up to with the mod!

Im writing this a bit late, but I've been so busy I have not had a chance to do this earlier.

Last month was not the most progressive, but despite some spring flu and our day jobs keeping us busy we have nevertheless managed to make some headway with the mod. 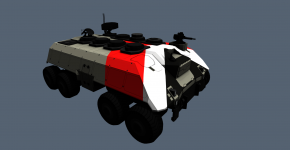 In a spur of inspiration I did a bit of redesigning on the BlackBird HQ vehicle and also begun to work on the textures. There are already some normalmap details forming up and I've been testing the corporate colors.

Now you may think they are too bright and will be too visible, but the corporate salvage operations are normally not that violent and the salvagers tend to respect each others claim on whatever they've found. They do not usually work in secret.

Now the Dragon changes things as it is such a big price that it drives even the most decent salvager to the edge and things get messy. The colors most definately will not help, but what can you do?

There will be different color schemes though for server admin to pick from, but this will be the default.

The walkers have also received quite a bit of love as I reworked the walking animation on the WK-209 and the silly walk show here is a side product of a early test. (It is synchronized now ;D) The new animation fixes the strange bone scaling bug the previous animation had procured. I thought at first that it was some blending error, but noticed after a while that the problem indeed was in the imported animation.

Also the Blufor Anubis, the first challenger for the WK-209 has reached in game testing and we have already taken them on a spin and I faced off in a duel Duke Nathaniel. Since there were only the two of us, it was mostly goofing around as you cant very well control both the legs and the turret/torso and weapons with only one player. But whats important is that they work!

We are working on a demonstration video of the walker combat so stay tuned on that!

We are also been planning and trialing Trello as a sort of an online interactive planning/development/bugtracker board where we intent to list upcoming features, bugs and mod progress and where all you who are interested can the more easily follow whats wip and whats been done and what we plan/want to do. It seems like a handy tool for just that and we hope to open it up to public soon.

We've also been discussing about possible donation/patreon/other system like that for the future as we eventually want to put up our own servers and such, but on that front there is not yet anything solid. We will let you know when theres more to tell and if the subject brings out questions don't or opinions don't hesitate to let us know. Also if you have experience on the matter we would love to hear your advice!

As a last note and a I wanted to show off this:

I've recently aquired access to 3D printers and of course wanted to print something I've modeled myself. Heres a real life version of the WK-209! The mighty walker stands about 10 centimeters tall and has poseable legs and turning turrets!

Its been awesome to see it like this and as a scale model/miniature table top hobbyist this is a real treat. It still needs a lot of work but it sure is fun to tinker with it!