My God, VALVE did it again!!! (how do we screw modders over big time)!

edit;
SEEMS NOTHING HAS BEEN
DELETED AFTER ALL, VALVE HAS PLACED THE ENTIRE MOD IN THE common FOLDER.
FEEL RATHER STUPID FOR MY SHOUTING ABOVE, BUT VALVE DIDN'T MENTION
THIS, SOMEONE ELSE HAD TO TELL ME.

i knew this would track your attention.
But, nothing lost, Mod was done no harm.
But, it could easely just have happend!!!

(MODDERS READ THIS BEFORE YOU START A SOURCE GAME YOU MOD WITH !!!
IF YOU DON'T WANT TO LOOSE YOUR MOD !!!)

What is the case. I was mapping and wanted to see how it looked in game what i just made, so as
always i compiled the level and as always ep2 would start to play the level.
But now Steam opened a small window with a message that ep2 had to be updated or something like that. All i could do was click OK. So i did, a text said it could take some minutes. That it did, about 15. At the end it said it had downloaded and installed stuff that wasn't there. ep2 didn't start so i started it automaticly. All fine so far. But the level (small weapon test map) was very dark, normaly it is always
bright enough), more strange was that all weapons were gone, changed in to the old original HL2
weapons. On the wall i did see my custom added texture though.
Strange.
I went over to my ep2 folder on my hard disk and all folder were there from my mod, but...

Everything, models, textures, materials, sounds, scripts, etc etc etc.
all mod folders were empty, (still don't understand why i then do see my custom textures still in that testmap, while everything else was changed back in to original ep2 stuff).

i am mapping/modding for 13 years now, and although i am most of times a slow, and particular lazy learning, hard working though, even when i say so myself, lol. So, over the years i have learn that you
need to save your stuff, on a DVD, or a website, or a friend. But, you need to have your stuff also somewere else, and not only on your hardrive somewere else. Because many times a computer dies.
So, i have everything on DVD's to, and my friend Baltic has it all to.
Am i glad i just had finished a level, and uploaded that to him.
so, nothing is lost. I just need to put evrything together what will take a few hours because there are
many version of this mod, over time stuff is added.

Man, what a shock it was, all files gone.
valve this it again,.... and this time they have screwed even bigger up as they ever did before!!!
And, without ANY warning!!! nothing, just, throw it all away, who cares....

SO< MODDERS< PLEASE, PLEASE SAVE YOUR MOD before YOU START THE SOURCE GAME YOU ARE MODDING WITH. (because i assume this will also happen with hl2 or ep1, haven't tried that. and
maybe it also works like this with other source games, if they are even updated that is.)

(and, please don't get me wrong. Valve has given us great games over the years, heck, i mod with 2 of them over 7 years now. that says enough. But, how they go about with the people who use there games for making mods, that is simply unbelieveble!!! this is not the first time you know, also not the second time. believe in fact it is the 4th time now, and this is the biggest one to. but enough complained. i just wanted to get this out, even when it saves one modder from this disaster then i am already pleased).

sorry if i did scare you, with that the mod was lost...
and for that i have no new screens etc. but, all screens have gone lost, no biggy.)
just to give this text a bit of color i will however show a old screen you already did see; 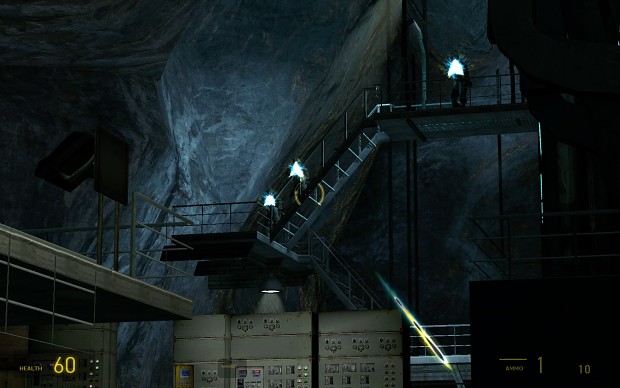 edit;
SEEMS NOTHING HAS BEEN DELETED AFTER ALL, VALVE HAS PLACED THE ENTIRE MOD IN THE common FOLDER. FEEL RATHER STUPID FOR MY SHOUTING ABOVE, BUT VALVE DIDN'T MENTION THIS, SOMEONE ELSE HAD TO TELL ME.

I guess you can't really suggest backups too much.

So Valve did this on purpose? You think they're jealous that modders are making more progress than they are?

Stop making misleading titles, God i hate those, they not bring an attention, they simply annoy people.

This does NOT sound like Leon. I smell a hijack.

Why not, He's simply warning everyone what happened, He was smart enough to have it backed up but he's warning you all because if it had happened to someone who is not backing up there work it could of been hundreds of hours lost.

This is not hijacked, i really did write the text above.
I should have called it indeed different, but i was, and still am so ******. I thought i didn't loose anything but still lost 2 full days of work, just on the new level (20). Glad to say it just was a small testmap were i did test something in, so not a major loss.
Still, should this have happend a week ago i would have lost the complete level 19, what was 6 weeks of hard work. I only save a level ones it is done, it would be to crazy that i have to save or upload a level each few days. But considdering how Valve works, i should do it like that.
And ofcourse doesn't Valve do this on purpose DBuilder, but they also don't do anything against it! At least they should have given a warning, something like; all custom content will be deleted from game directory. how easy would that not be to add.
All they said through that small info window was; STeam will update ep2, and with that you think you keep everything in the game dir.
For sure we will hear a lot of people the next week i assume, that have lost everything. You simply can't imagine how you feel ones months, or even years of work is destroyed with one OK click. Untill it happens or has happened to you.

Okay then. I guess you were angry and hurried, which made me think you were someone different. Sorry.

That is a very sad news. But the project is still continuing working and move on right ?

I was indeed angry and hurried Seaal, i have calmed down now, its the next day. I have changed the title last night to MOD IS LOST,....almost.
Because it's not nice to scare people, don't know why i did that. Maybe because my first reaction was that i had lost a lot. Now i know i "only" have lost about 16 hours of work. What is a real shame, but considdering that i could have lost about 2 months of work it is not much.

And the mod will go on like nothing has happend, Stoudemire. Thanks for asking. I will need 2 days or so to put everything together again, because i save each time the latest stuff, on DVD's and to my friend Baltic. Now i just need to look in to all that work (work from 3 years), collect all the latest stuff and put it together again.

This all did make that my whole day was destroyed yesterday, the whole night i was completely ****** up!!
but ok, complaining more doesn't help. I just go on like nothing has happend and will release this mod as soon as possible,
I am glad that this is my last mod with Source, at least for now. ANd for that i really am glad, not only because i finally will then start with my first indie fpshooter, but also because things like this can't happen to me then anymore.

i feel rather stupid now, because the mod wasn't deleted after all, it was replaced to the COMMON folder by Valve!!Why they do so, who knows. More important, would have been nice if they had mentioned this before when they asked me to update ep2. Now i had to hear it a day later from Josh Zemlinsky, who is working with me on the weapons and ammo boxes.

haha, indeed Dr. Goupyl. But, Josh is absolutely right!
It is such a shame though for many other modders and mappers, because i am 100% sure that there will be quit a lot of them out there that don't know they can find there stuff back in Common. And assume everything is lost that they made over the months or years.
Ofcourse, back up, back up, back up!
But, you only learn to do so after it has gone ones or twice, or even more wrong. With me that was the case, years ago. And even so, you only back up something that is finished, or almost finished. You can't back up something each day. Level 19 for instance i have been working on for a full 6 weeks (6 to 10 hours a day, i know, get a life, lol).
It is a miracle that i just finished this level a few days before this all, otherwise it would have been lost, i thought. But as i already mentioned will there be people that don't know it is in Common now. because that information about Common isn't spread well enough. It was that Josh mentioned it to me, otherwise i still would think it was the other way around.

But, o well, i have learned Valve works like this. So i have get used to it. And, no harm done after all.

I thought there was no trouble anymore, but last 2 days Hammer didn't work anymore. Just have found the fix for it, just wanted to mention it here should some other mapper have the same issue, (and a lot of people had this error, forums are full of it);

Geez that must have scared you alot. Thank god its alright.

The same thing happened to me. Here is me going to try to use hammer again after a few months just to find it was broke, so i try to fix it to find out that its all been moved around. So like always trying to find the gameinfo file so hammer would work right just to see that it now doesn't want to work at all. Happily at the end i did get it to work, but then after a few days of mapping on a map Hammer crashed and now i cant load the map. Some time i think its just my luck.

Yes, hammer seems to crash when you have used a model or something that isn't in the model folder anymore. normaly that model is then replaced with a big red "error" word, but now it seems to crash. really nice, (NOT)! by now i have it all working again, although when i compile level and want to test it it doesn't start ep2 as it should do but ep1. guess i need to change the gameinfo.txt value.

Thank god the mod is safe after all, I was scared shitless before the edit came.