This article will explain all tactical improvements that will be introduced in the next release of Might & Magic: Heroes 5.5.

The next release (after RC9b) of MMH5.5 will be considered a ‘Beta’. The reason to call it a beta is, it underwent a long and exhausting phase of mathematical analysis and duel testing to significantly increase the tactical complexity, variety and balance of Main Hero vs Main Hero battles and some significant changes needed to be done to the spell system and mathematics of the game to make this possible. All changes are supposed to improve the adventure map experience as well and special care is taken to keep the gameplay as much as possible as the older versions. Nonetheless it seems a wise decision to drop this version as beta prematurely to make sure everyone is happy and the version is 100% solid first. This is going to be a long wall of text, with a lot of theory. If you are not much into that I recommend just let the game do the math for you and wait for the next article that will deal with the ‘candy’ in the next release.

Thanks to Deflaktors work on the .exe file, the next version will have a theoretical level limit of 99, although in practice the player will probably get stranded between 50 and 60. A lot of hero specializations and scripts will need to be adapted to this, pretty much all specs that boost primary skills and creature growth and various others such as catalyst, hammer of elrath and poisoner. 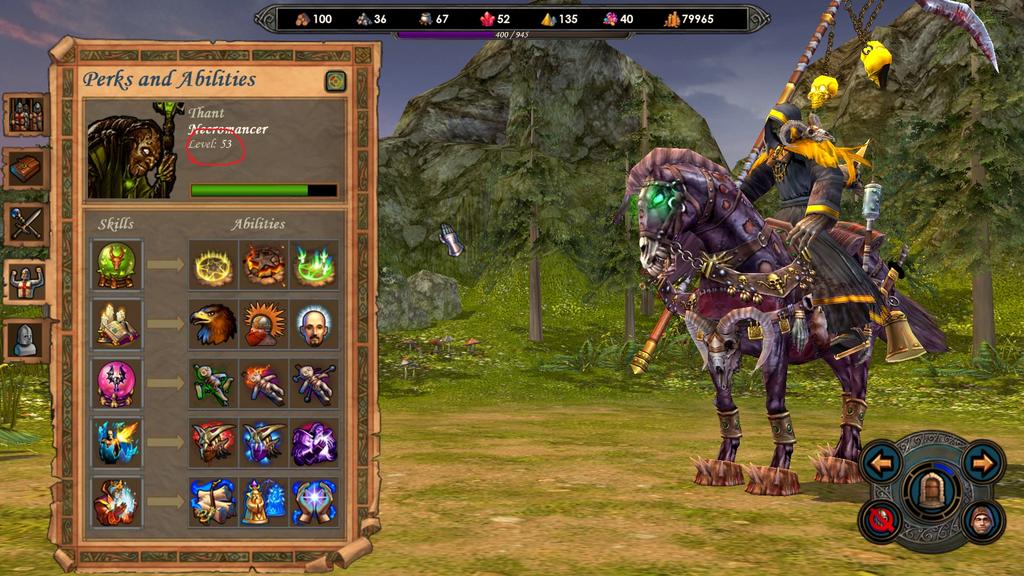 Fundamental 2: Relevancy of all pawns

Attack and Defense primary skills increase or decrease creature damage by 2.5% instead of 3.33%. The reason is with the old values tier1-4 are too weak compared to tier 5-7 in Hero vs Hero battles. They often feel irrelevant and therefore the battle is dumbed down to the higher tiers only. This also improves balance late game between might & magic, but early in the game might heroes needed a boost, so the combat skill is significantly better in this version (retaliation, martial arts & stunning strike). The Defense secondary skill on the other hand was slightly overpowered and now uses the same number as Offense. A side effect of this change is it will make neutrals a little stronger and shooters a little weaker. Tactically this is an improvement, but the default setting for amounts of creatures in battle sites was accordingly adjusted slightly lower (can still be user adjusted to anything). Another side effect is that many perks and artifacts that give Attack or Defense boosts now needed to boost higher numbers.

There was broad consensus units have too much speed in H5 for the small battlefields. This diminishes movement as tactical element and makes skills like tactics of minor value. Some suggested the whole concept should be redesigned, but this may be too much for the many casual players, who may not like it if suddenly all units move differently. So a more conservative method was used instead. For all factions a few of the tiers that could be considered 'too fast', one of the upgrades loses -1 Speed in return for some damage or durability while the other remains fast as in TOE. In general a lot of units in the game will have lost speed, but in practice it is still possible to use the tier the same way as before. Affected tiers are: Haven T4,T6,T7, Sylvan T2,T5,T7, Academy T2,T5,T6, Dungeon T2,T4,T7, Inferno T5, Necropolis T4, Fortress T6, Stronghold T5

Many issues with spells needed to be fixed: the new frenzy and confusion spells couldn't be used by AI, but simply restoring them to TOE stats overpowers Dark Magic. At the same time Light magic was too weak in Late game for magic heroes (only reactive spells, no offense). So some spells will be moved (see below). All Destructive spells will scale better in very late game (=more damage in late game XL maps), but they will also be weaker between 1 and 10 spellpower. The reason is they now use mostly 0 base values, for example expert Lightning was 20 + 20 * SP, now it is 0 + 24 * SP. Furthermore many spells in destructive magic were too cheap compared to their impact. There were also various spells in other schools that were too cheap. Take in mind spell cost increases are not nerfs, from perspective of magic heroes they are buffs, because if they are cheap they are too easily used by might heroes and stronger more expensive spells allows magic heroes to invest their Knowledge in the battle faster.

- Frenzy is restored to TOE power, but also very expensive and a level 5 spell. AI will now use it properly.
- Teleportation is moved to Dark magic level 3 with new icon. (Note that it is also still available to Light with a perk)
- Confusion is lowered to level 2, the effect is weakened but can be applied to everyone. AI will now use it properly.
- Sorrow is made more powerful, cost increased and moved to tier 3, it can pin down units hard (tactically replacement of old confusion). 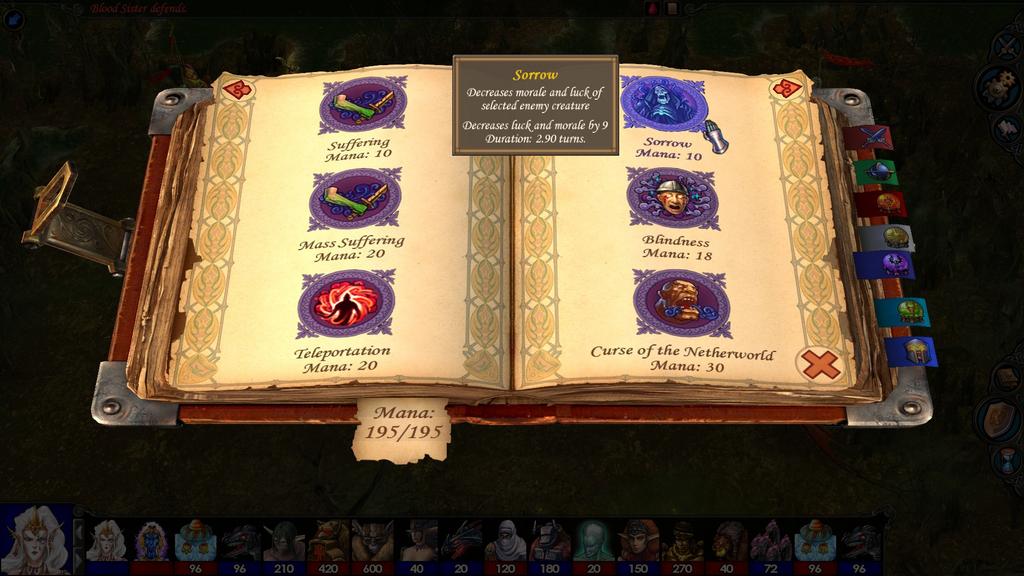 - Phantom forces requires 10SP for each tier above 4 to be copied.
- Puppet Master is renamed Hypnotize and moved to Summoning Magic level 5 with new icon (both frenzy & puppet master in one school is a major balance issue)
- Magic Fist now uses same damage formula as lightning (much more useful) and swaps places with wasp swarm.
- Firewall is now ‘pre-empowered’ and more expensive. 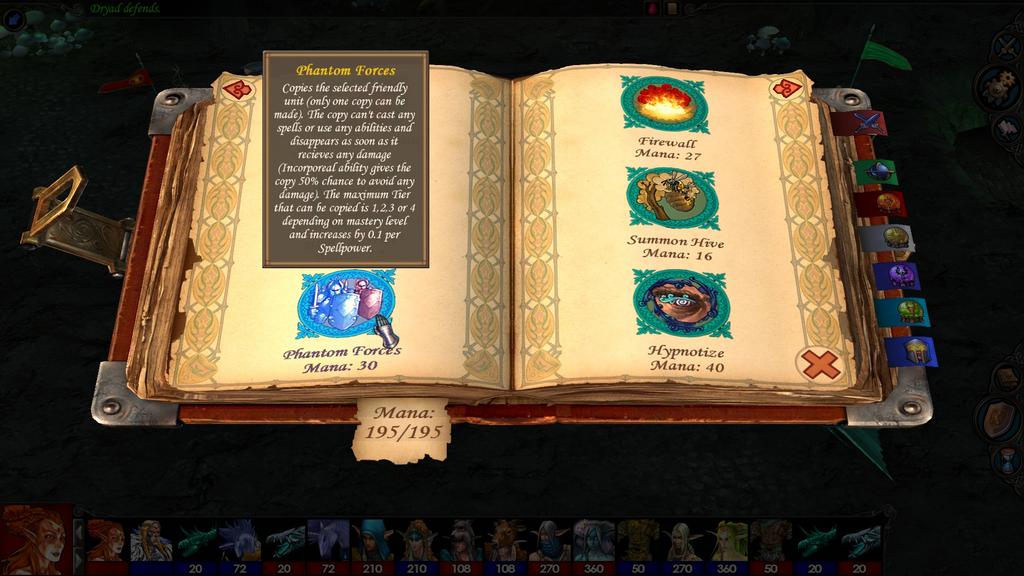 - Buff and Nerf durations are calculated like 1+0,1* Spellpower. To maximize dynamics of spellcasting.
- Righteous Might, Endurance & Suffering are more dependant on spellpower to help magic heroes better. (=give more bonus with higher spellpower)
- Arcane Armor is renamed Celestial Shield and moved to Light Magic level 5 with new icon. It is also made more powerful (cost 30 mana) and will fix the weakness of this school. 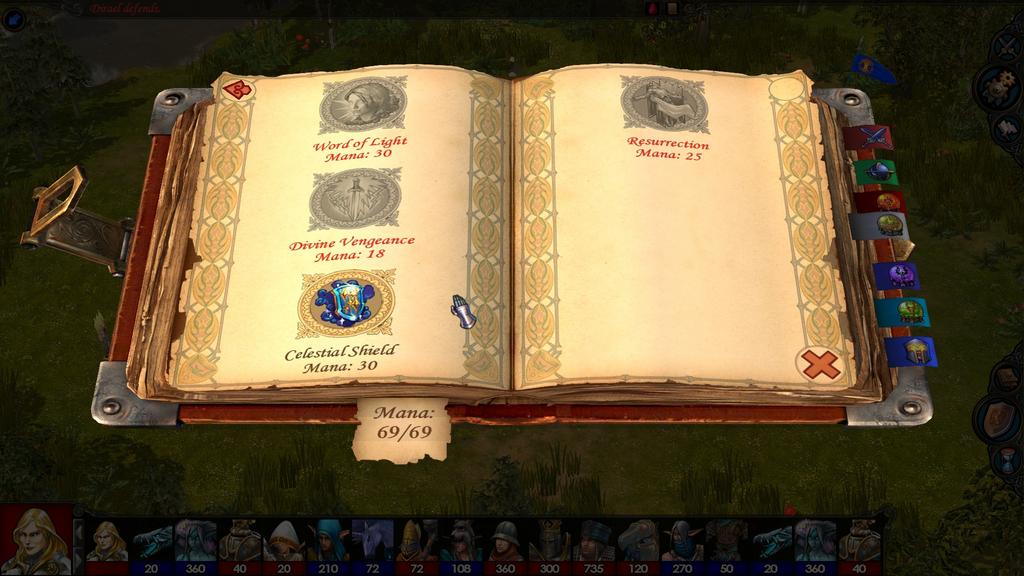 - Cleansing is made more reliable but also more expensive (20 mana), this spell must be considered a counter to strong spells primarily, if it has low cost it is very unfair to magic heroes. Weak spells must be countered with the opposite version (haste vs slow etc.) This will also make battles less boring, you need to be more creative than constantly switching off what your opponent is doing. Because mass cleansing is now 40 mana, it will be improved to cleanse all friendly stacks. Cleansing will also be more reliable on creatures and description will be more explanatory. Teleportation cost will also be increased to 20 mana for same reason (=frenzy counter).

- Stone Spikes has a more useful formula and costs 10 mana, you are going to use this spell more often against neutrals. The reason is Fireball now costs 24 mana (which is what it actually is worth ~ 3 Lightning bolts + vulnerability)
- Ice bolt is now more different from lightning, it is stronger, but also more expensive, consequently Circle of winter is also stronger and lifted to level 4, Chain lightning is lowered to level 3 (It was actually already weaker than Fireball and Circle of Winter most of the time).
- Deep Freeze is now a step above implosion and does even more damage but is also very expensive.

- Analysis of Combat logs showed retaliation damage bonuses from combat skill were too low and are now increased to 15%,30%,45%. Defense skill on the other hand was overpowered and is reduced to 10%,15%,20%. Because of a mathematical phenomenon defense is actually a little better than attack even with the same numbers.
- Sorcery was also overpowered and is reduced to 11%,22%,33%, those numbers may seem odd but result in the equivalent of exactly 15 initiative at expert sorcery. The default hero initiative is 10.
- To make up for combat base skill weakness, martial arts is improved to give 70% for double damage. On average across all tiers the heroes melee damage with 70% martial arts is roughly equal in value to a damage spell with formula 20 + 16 * SP. (If you count spellpower as levels). Without martial arts it is more like (10 + 12 * SP).
- Stunning Strike will reduce ATB by 0.4.
- Heroes do more damage against the summoned phoenix and summoned hive with their regular attack.
- Most of the perks that give any A or D primary stats have slightly larger numbers and give full bonus immediately, because might is otherwise weaker early game. 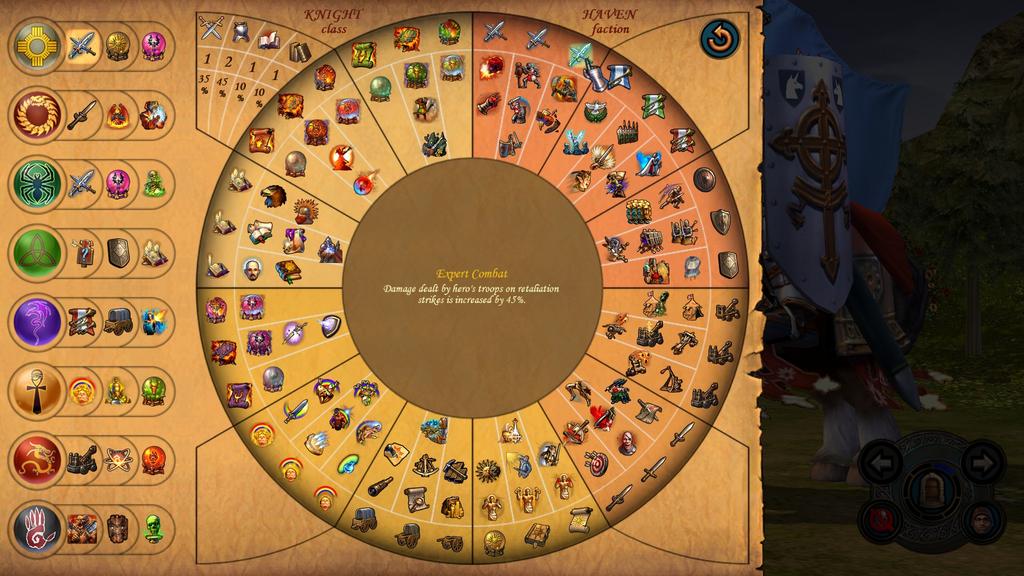 - Some creatures that cast nerfs or buffs have one more of such spells for variation purposes.
- Combat Mages have a Dark Magic spell book for tactical variation purposes.
- Righteous Might from High Druids is moved to Druid Elders, High Druids get Divine Strength instead, RM was unfair on High Druids who already have the best ability (channeling) and also had the best spell.
- Goblin Defilers will now have cleansing instead of defile magic (this ability was balance broken beyond repair, with high numbers it blocked heroes completely, with low numbers it was very uninteresting (same as shatter skill). This is important balance fix because Stronghold had no mind spell defense so could otherwise be driven into frenzy and puppet master endlessly. The goblins will still use dancing animation when they cleanse spells. Succubae mistresses will also be able to cleanse for same reason (no light in inferno mostly).
- Wasp Swarm was removed from Sprites and instead their stats are better and cleansing will be more reliable. Wasp Swarm on them is almost completely pointless (2*SP) except for annoying the player in very early game. I basically tried to fix this with negative base value, but doesn't help enough. It had no ATB reduction in RC9b, but if I add it, it will become overpowered against neutrals since the player will just always push the target behind the shooters at begin of battle.
- Haven T5 shares renamed 'melee preference' ability with Dungeon T1, Priest will now do significantly more damage in melee, but will always be limited to half damage at range. 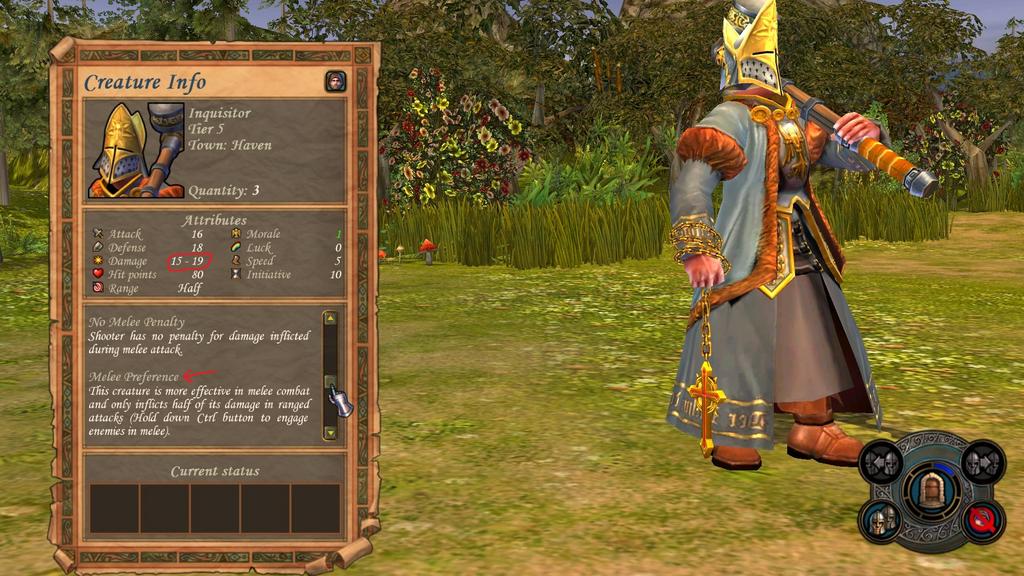 Nice. Your mode is epic! Keep it up.

What reason was there to disable gating for succubi mistresses

no, it happened by accident and will be fixed

Hey man, thank you so much for your work - we enjoy it so much more to play with your version of AI, awesome work...

We expirienced though in multiplayer one little issue about the AI tactics:

> if one's own hero is getting close to a foreign castle (with a balance of power estimated "challenging"), the AI just rides out of the castle and away!... it happened a couple of times in three or four different scenarios.

anyone with same experience?

(I am new to this mod) I have fought against AI castle only once. Threat level was "challenging". The AI won't leave the castle when I'm in attack range. It will dart out to recapture a mine, but either darts back in to the castle or uses town gate. It is like fighting a turtle. I am trying a siege tactic, but it is slow going. (three game weeks so far)