As many of you may have noticed, Missing Information has made it to MODDB's Mod of the Year top 100. It's come a long way, and we would like to thank everyone who have voted so far, we greatly appreciate your support and we hope that with your help, we can make it even further!

As many of you may have noticed, Missing Information has made it to MODDB's Mod of the Year top 100. It's come a long way, and we would like to thank everyone who has voted so far, we greatly appreciate your support and we hope that with your help, we can make it even further!

Now, many of you are probably wondering what's up with 1.5.2. We are not being lazy, and we certainly are not procrastinating. The Missing Information team is a rather small team and we all have lives (well, sort of) and because of these lives, mod work has unfortunately suffered. We're currently working on fixing up any bugs that exist in 1.5.1 and getting together both a full and patch release that should hopefully fix most of the problems reported by our fans. A release date is currently unknown, due to the sporadic nature of mod work, so we cannot give you a specific date or time frame, but what we can tell you is there is not much left to do.

We would like to take this time to remind all of you that 1.4 and 1.5 are all DEMO releases. The first version, 1.4 was released way back when in 2006 as a playable alpha, 1.5 is simply an updated version of that release and we're currently working on something much bigger, and that brings us to our next official announcement.

Missing Information is being released in Episodic form. We've been focusing on this for a while now, but the recent patch has kind of set us off the track. 1.5.2 will be the last patch of 1.5, we're abandoning all work on it and you should know that nothing seen in 1.5.2 is representative of what will be in Episode 1. Episode 1 will be a complete overhaul of the storyline shown in Raising the Bar, taking the player through City 17, through the grimy sewers to the outer reaches of the city. Episode 2 will pick up right where Episode 1 left off. Our previous media release minus a few screens shows off some of what we have planned for Episode 1, and certainly there will be more to come.

Last but not least you may have noticed we put up a new render of the Cremator model remade by Mugofdoom. We've decided to, in addition to our media releases, release a screenshot of WIP or completed work every so often, just to show that we're actually hard at work and not slacking off. 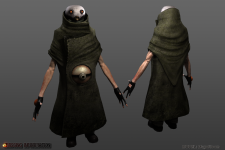 The Cremator is a Combine janitor of sorts, based off concepts from the book Raising the Bar, he is a transhuman, cyborg type being with a stomach that produces a corrosive acid. This acid is pumped through a hole in his stomach, through a hose connected to his gun, known as an Immolator. His job, is basically to go in after a major fight or outbreak of Xen wildlife in the cities and spew his stomach acid on the bodies and aliens, and basically clean up the mess left by Civil Protection.

This creature paints a grizly picture of the state humanity is in, the Combine have transformed them into slaves, janitors and many other forms to suit them. Expect these hulking monstrosities to patrol the ruined streets of City 17 once Missing Information: Episode 1 is released, and expect more media from us as we complete it.

All the E3 maps are already included.

We've been working on e3_lab but it's just not worth the effort we put into it when we could be working on the actual mod, the actual storyline, etc.

I never knew that the Immolator's acid comes from Cremator's stomach.
Where did you find this info?

So how does Gordon use Immolator (I know that it was a weapon that the player could use in HL2beta). Has he taken a stomach from a Cremator? And what gives more ammo to this weapon?

In the concept you can see a tube going from the back of the immolator to his stomach.

Each immolator comes with a set amount of acid in it, you get more acid from picking up other immolators. The Cremators have infinite acid because they generate their own.

FREAKIN AWESOME! FINALLY! MAI PRAYERS R ANSWERED!!!! now all i need is a new PC....-.- lol, so, will you have really epic voice acting with scripts from Raising The Bar, or will you have EPICLY COPIED voices from the beta and some of your own? My god just the thought of all this is...so..so...EPIC i just want to, SCREAM and not alot of really epic mods make me scream its epicnes.....Jerry gives you an 1,000,000out of 5 KEEP IT UP!:3 ....did i say this is epic? no? well this IS EPIC-er than modernwarfare 2 and hl2 and everything!! ill stop now :3

I wonder what weather control is gonna look like.

Me too, but I know a big battle with tanks and Striders will be involved.

Raising the bar, in game. Finally.

ok, its been FIVE MONTHS since anything has been reported. its ******* me off. i wish they would release a 1.515 patch or something just to show a semi working game.

We just gotta fix the Odell staircase bug and we're good to go.

yea u said that like ages ago:(. i agree with him. give us news at least

did gabe newell asked for themissing information team to stop making this mod?
i heard about it, is it true?

Is this still a work in progress? Or is it done?