First they gave Minecraft a huge mention on the Team Fortress 2 blog, then the interview with PC Gamer came online. Not only is TF2 one of my favorite games ever, and I subscribe to PC Gamer (my favorite PC gaming magazine), a lot of other people enjoy them as well.

First they gave Minecraft a huge mention on the Team Fortress 2 blog because of the Minecraft-themed Team Fortress 2 map, then the interview with PC Gamer came online. Not only is TF2 one of my favorite games ever, and I subscribe to PC Gamer (my favorite PC gaming magazine), a lot of other people enjoy them as well. 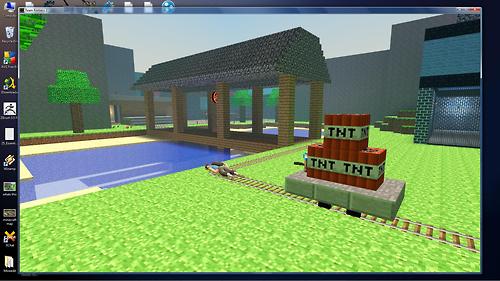 dccollection wrote: So for the last couple of days, I decided to start making TF2 maps again. I always imagined how my worlds in Minecraft would fare as maps for a multiplayer shooter, so to that end, I started this.

When I finish this payload map, I’ll upload the prefabs and textures I put together so that people can easily create their own minecraft maps.

This is so cool I can’t even start to grasp it! VALVe’s made four of my favorite games ever (HL1, HL2, Portal and Team Fortress 2), and I have secret dreams of getting Minecraft up on Steam once it’s more complete. I own almost 200 games on Steam, which honestly has helped keep AAA PC gaming alive after traditional publishers started abandoning it.

This is so cool that I can almost forgive them for forgetting about Gordon. Almost.

There's a thunderstorm here at the moment. Lightning strikes and heavy rain. And then the sales went up to 1000 copies sold in a 24 hour period.

I’m not sure what to do! I’m honored, happy and proud, all at the same time. Thank you, everyone, who have tried the game, or bought it, or talked to their friends about it, or mentioned it on their billions of views per day websites.

In more concrete news, I noticed that BIGJam starts next week. I will release the SMP server before I leave for that. It might be buggy, but I promise to fix it when I get back. It will be missing mobs. Mobs will come later on, and when they're in, the game will officially be in beta, and the price will go up to 14.95 euro.
While in beta, I will start polishing the game and adding alternative payment providers for people who can't use paypal, and keep piling in new content.

Thanks for sending me your levels, please let me know if levels still crash after this update.

As for the server, it’s extremely full, and is currently getting eight connection attempts per second.

whew. mega blog mash-up. I think this is deserving of actually having a news update. sorry if I made any huge mistakes formatting it!

off topic, lets all congratulate notch on this! well done! lets hope it won't interfere with the seecret friday update too much ^^

I've played the free version of your game twice. Only twice. The first time, I was just completely confused. The second time, which was several months later, I fell in love with it. I just love creating ridiculous monuments and towers, even if they vanish when I leave. :(

I'd like to buy your game, but honestly, I've bought too many Sandbox games that turn boring after just a few weeks. Perhaps when a test version of the current Alpha goes public, I'll see if it's worth buying, or rather, something I can stay interested in.

Amazing game either way, with tons of potential.

I'm so pumped about this. i saw the tf2 blog article about this first and then i came here to check your updates.

i got three people to purchase this yesterday haha. they love it. keep up the good work. i'm happy to hear we're almost at beta stage!

When a person from two different communities comes together to make an awesome thing.

Wait. If I buy it now at the reduced price, will I have to pay again when it goes up?