This article will explain the Lore of Might & Magic: Heroes 5.5, which is in current version (RC9b) close to fully updated to MMH6/7 Lore.

To prevent any misunderstandings, this is not a plan for a big overhaul of the mod, this is mostly an explanation of what is already done in RC9b, the only exception is everything that is mentioned below under 'summoning of elementals'. While there are inconsistencies between Lore in all Ashan Games, HOMM5 can generally be considered most inconsistent and sometimes plain ‘wrong’. This is because Ashan Lore was very underdeveloped in HOMM5, since initially the game was going to take place in the old universe and quickly switched during development. This article seeks to explain why TOE has wrongly assigned spell schools and why Destructive and Summoning Magic should actually have been called Chaos & Order Magic. It will also explain why shatter skills are lore wise appropriately assigned in H55 Skill system and why (in the next release of H55) the summoning of elementals will make more sense. It will also explain why Academy is supposed to have access to necromancy and why the RMG places Academy Prisons with demons in them and Shantiri Discs.

This is going to be an ‘in a nutshell’ explanation, for the full story you can get lost on the wikia or MMH7 websites

Ashan was created by Asha, the dragon god of Order, worshipped mostly by Mages and Necromancers (twisted interpretation). Asha is neutral towards Life & Death and all elements, so is not against any race or necromancy, but Asha opposes her twin brother Urgash, the dragon god of Chaos.

Ashan’s Timeline has 3 Ages, the Mythic Age, the Ancient Age and the Historical Age. All H5-7 Stories take place in the Historical Age. In the Mythic Age Asha fought with Urgash, the dragon god of Chaos and won saving her world from destruction. Urgash is the creator of Demons and is worshipped by Haven Heretics. In the Ancient Age all races were united under Asha’s rule in the Shantiri Empire. The Shantiri Empire was destroyed by a war between the Angels and Faceless. The Faceless do not appear in H5, but they can be considered ‘dark angels’ who later helped converting a part of the elven race to Dark Elves worshipping Malassa (currently the Dungeon faction, which is therefore supposed to have Dark magic as primary school).

In the beginning of the Historical Age, the mages helped fighting a demon invasion. Asha elevated one mage Sar-Elam to a god for sacrificing himself to save Ashan from demons. He is called the ‘Seventh Dragon’. The mages used evil experiments to create Orcs from Demonblood to help fight the demons, but after the war they enslaved them as a cruel reward.

Sar-Elam and the mages prisoned the demons with magic (that’s why the RMG places these demon vaults with Academy appearance). Mages have a long history with Necromancy and is source of conflict between them, Asha is neutral towards Death and Necromancers don’t consider death a bad thing, instead they consider it peaceful. Therefore Necromancy can rarely be learned by some living magic classes. In the next version some modifications will be made to the chilling bones and dark emissary perks to make necromancy more useful for living heroes.

In H6 the 4 elements are split up in separate schools, but in H5.5 they remain together and reflect the all-encompassing power of the primordial dragons. Summoning magic is actually Order Magic or Prime Magic, it is the supreme magic school and includes all elements and types of magic (damage, buff, nerf etc). Asha doesn’t seek destruction but ‘Elemental Balance’, Order magic serves to preserve her creation and ‘Banish’ the demons to the underground. Note the perk references. In gameplay summoning is not necessarily the best school, because it is hard to handle and requires lots of Spell power.

Destructive Magic is actually Chaos magic and opposes Order magic. Ultimately it is used for the destruction of the world (Armageddon). The best mages can control it and use it for their own purposes. Light and Dark oppose each other, similar as Chaos and Order. Light magic+shatter dark increase devotion to Elrath (Paladin) Destructive+shatter summoning increases devotion to Urgash (Heretic). As a consequence of all this the skill combos light+dark or destructive+summoning are extremely rare and conflicting and mostly confined to Academy mages, who value knowledge above all and are not interested in religious purity. At this point I have not really decided if Summoning & Destructive should actually be renamed Chaos and Order in game. It depends on how people feel about that and if the practical purpose of keeping them the same overrules strict enforcement of Lore.

Orcs don’t have any awareness of Dragon god alignments. They worship the elements Earth and Air, but refer to them as Mother and Father. The Witch class is an addition unique to H5.5 and are considered ‘dark shamans’ who have decided to embrace the demonic genetics of Orcs and use Urgash power to destroy their enemies.

The following Table shows correct alignment of every faction (notice that ingame skillwheel shows correct dragon symbol for each faction).

(This table is just a depiction of H6/7 Lore, it does not imply any changes to H55 skill system and mage guilds!)

H7 introduces 4 new resources, but in H5.5 only one will be relevant (Quote from H7 website):

‘Dragonblood crystal is the very blood of the Dragons Gods, that was spilled over Ashan during the Wars of Creation. Its power is versatile and unrivalled. It is used in many magical buildings and allows the breeding of magical creatures.’

As of RC9c Dragonblood crystals will be used by the mage guilds to summon elementals and will be rewarded to the player by dragon gods in return for corrupting the magic school they oppose. For example if the hero takes the ‘Corrupt Light’ perk, Malassa will reward him with dragonblood crystals. Hero will rewarded by Urgash for corrupting Summoning (Order). The following images will show how lore-based system will clean up the UI and makes more sense: 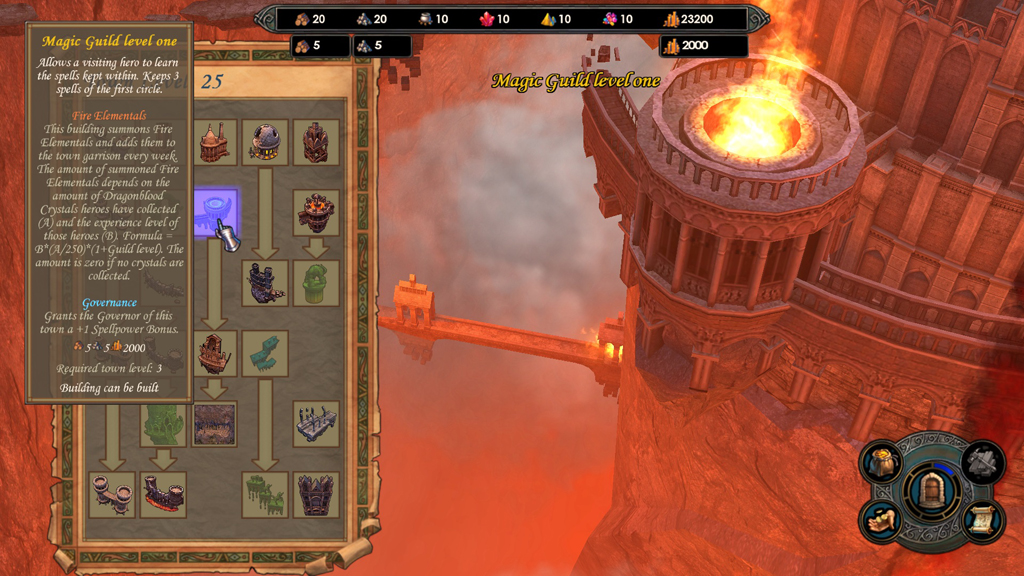 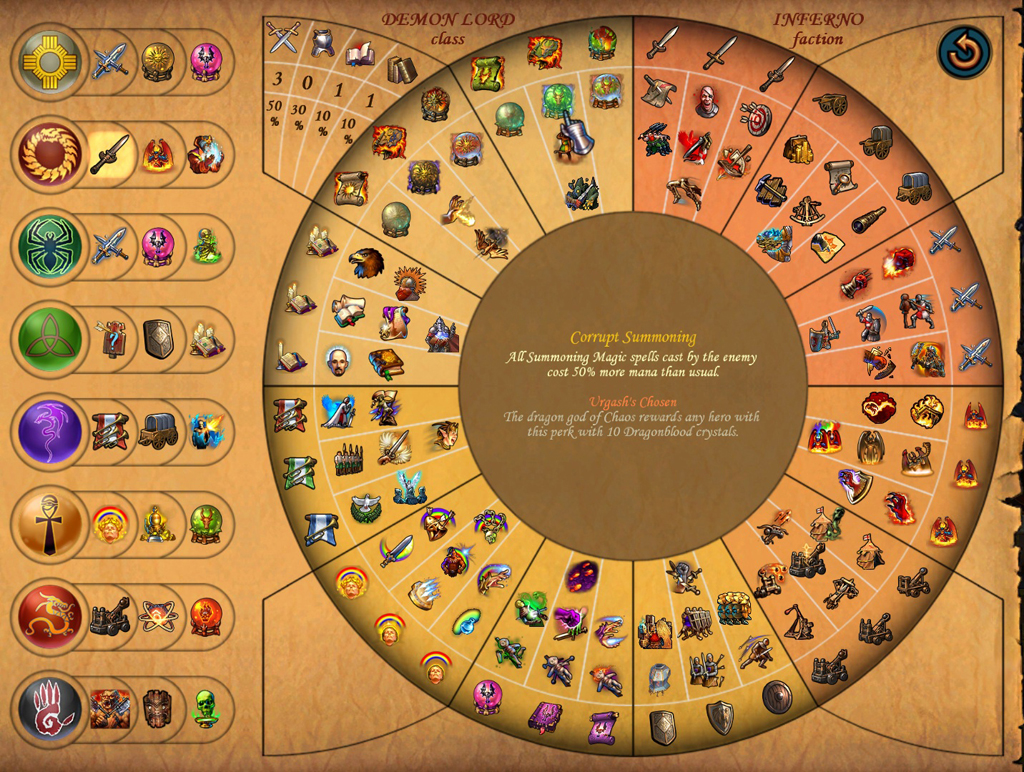 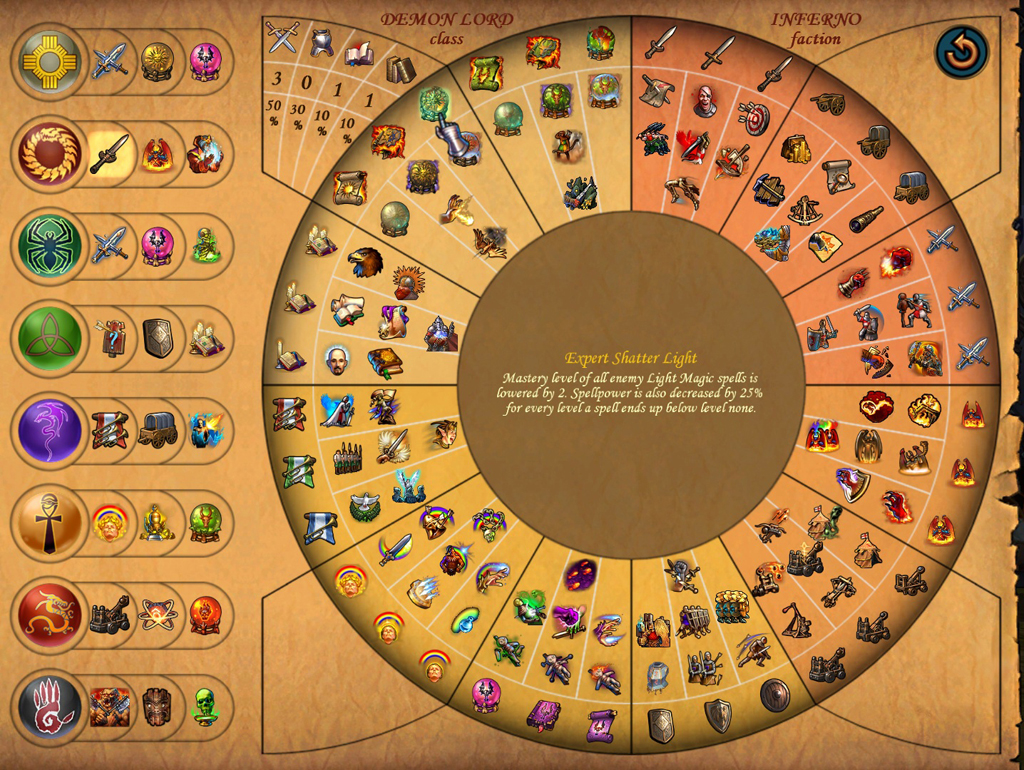 These screenshots were taken before some fan feedback was gathered, so there may be slight changes in the final result, currently the decision has been made to not have all factions summon elementals. Dungeon will summon Manticores and Necropolis mummies. The wolves will move from Stronghold to Sylvan because they fit there much better esthetically, and according to Lore Sylvan is supposed to have an earth creature (not water).

Wow! This looks impressive. Keep it up.

I am new to this mod. My wife and I play only as a team against the AI. We just discovered mmh55 a few days ago and LOVE it.

We started years ago with HOMM2 and continued with H5 through H7. Like most fans, we think H3 is the best, while H5 comes close, with H6 and H7 being kind of missteps by Ubi. We base this rating on game-play, not lore. In fact, we've mostly ignored the lore down through the years and know nothing about it despite years of play. We simple play the game and love "discovering" the various infrastructure elements of it. (I would suppose that this is how most people play chess, for example.)

This article is fascinating to me because it demonstrates one more aspect of the tremendous effort, thought, and love that you have put into mmh55; it is greatly appreciated by us even though we don't care much about Heroes lore.

Thanks, that's nice to hear.