MidEast Crisis 2 got in PC Gamer and more! Exciting news for us, come read about it!

Mideast Crisis 2 is getting noticed in all the right places - it was featured in the latest issue of PC Gamer UK! The article itself is very detailed, and raises many good points. However, there are a couple of things that have changed since the article went to press:

You can find us in the latest issue of PC Gamer UK. Look for the one with the extensive "Empire: Total War" article. If you aren't in the UK, or can't get your hands on a copy, don't worry! We've got a full scan below:

HKH - the guy behind many of MEC2's 3d models - has landed a job at Digital Extremes as an environmental artist. He's a very skilled modeler, and has been the backbone of our art crew since the start. We all wish him the very best of luck!

If you'd like to see more of his work, including some from his student days, check out his portfolio here.

Prior to MEC2 Smurf was best known for founding the Generals mod Blitzkrieg 2*. During his stint on the mod there was something he had always wanted, but never quite found the time for. That was to make new world objects. Having custom map objects helps cement you in the world, and further set the mod apart from the core game.

MEC2 is the realization of that idea, and we may even have gone a bit overboard (getting all the damage states done has been a challenge). I know it can be hard to tell what is from C&C3 itself, and what is that is custom made, so here are some shots showing the MEC2 civilian art assets.

Screen 2 - Civilian Cars(Yes, Smurf does have an odd obsession with the Ford021c)

Screen 3 - Brand New!These are to polish up some existing maps, and work for in progress maps. Want to guess what one of our maps are themed after? Here's a clue: those are flowers, and the black object is a GOI memorial stone. Following the MEC1 war, and the creation of the GOI they had these stones commissioned to list the names of the fallen (both military and civilian) at places across the region.

We've updated the latest "status of the mod" topic with detailed info on how the mod is going, and what exactly needs done for release. You can check that out here.

One of the things mentioned is that the team has been working on the unit icons/cameos, here are some of the completed paintovers (obviously not in full icon-form, those will be shown later) -- 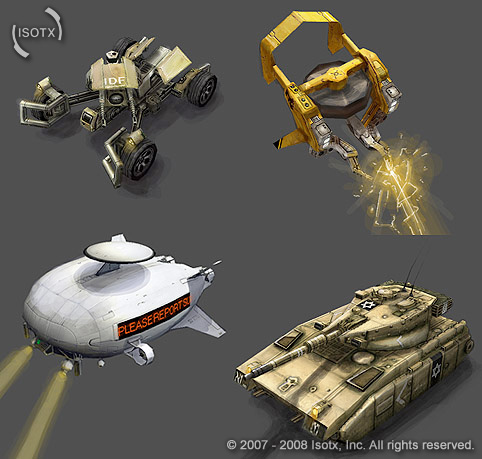 * - Some random info: MEC2's amazing coder, Korona, also doubles as team lead for the current incarnation of Blitz2. In addition, Vincent, aka Mr. Iron Grip himself, used to be a modeler for Blitz2.

Dune: Arrakian Wars was already in the PC Gamer UK, so we were a bit earlier in jumping into a mag q:

but nice screens like ever, I cant wait to get my hands on this mod if its released!

Well, if you want to get really technical, Blitzkrieg II, made by members of the MEC2 crew, got a two-full-page article in 2004.

MeC1 got in a bunch of mags :P

I sas this in the mag. Congrats guys!