A short writeup on the history of the mod and what's happening as well as an update on the most recent version of the mod. (0.0.4)

It's time for the long overdue update on Metal Gear Doom. The project is now in a much more refined stage where there isn't any reason not to start posting regular updates discussing the progress of the mod. For the longest time I haven't discussed anything in great detail as I didn't quite have the gameplay loop I wanted in my mind but that's all sorted and development has progressed a lot in recent weeks.

So far (a shortened recap).

PowerGloveNinja was a Doom modder who made Metal Gear Doom. I helped work on it but it never got finished. Eventually it became a multiplayer mod and at some point I branched off and made my own project for a college project. During the early stages of this mod it was given a moddb page and we barely did anything with it. Over the years I've dabbled with the project and over the last year or so I've been putting something together in my spare time. This is Metal Gear Doom, a mod originally conceptualised by PowerGloveNinja and since then I've effectively made a new mod in the same name. (A lot of his resources are actually in the very old screenshots, this will explain the jump in changes.)

2020, the year the project gets made. Over the past few months I've been working in private on ideas for this and I'm pretty happy with what I've come up with. Metal Gear Doom will be the following.

Metal Gear Doom is a Doom level pack set in levels inspired by Metal Gear. The focus will be on finding resources (weapons) and avoiding difficult fights as you will be under prepared when facing off against the demons. It will have (approx) 5 levels in the core game. When these 5 levels are complete I will be adding in 3 secret levels which will be inspired by the many ideas and visions I've had for this project over the years using the graphics of Metal Gear (MSX/NES). I will also be adding 3 "VR missions" inspired stages which are designed to be a lot more challenging than the regular game.

Once all of this is complete I will be adding in the multiplayer mechanics. This will be based on the multiplayer ideas PowerGloveNinja and I came up with (we pretty much just stole it all from Splinter Cell if I'm being honest).

That's everything up to now and the plans going forward. Now for a TL;DR
- Metal Gear Doom (original) was a mod by PowerGloveNinja that I helped with briefly.
- Metal Gear Doom (this) is a mod where I took the idea of making a Metal Gear total conversion for doom and got to work.
- It isn't a Metal Gear game, it is a wad that has maps and gameplay inspired by Metal Gear Solid.
- The retro levels will be in the game in a smaller capacity.
- VR missions will be added.
- Multiplayer will be added and inspired by the Splinter Cell multiplayer from many moons ago. 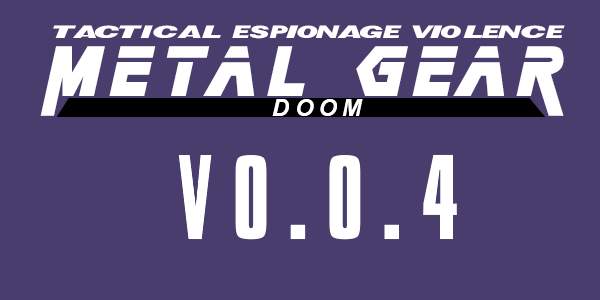 Metal Gear Doom V 0.0.4 has now been released which you can find here. Currently only GZ Doom is supported but if you use another flavour of the Doom engine and it works then please let me know so I can keep an eye on it in case I break compatability at any point. This would allow me to fix it much faster. It has only been tested with DOOM.WAD and DOOM II.WAD as it has depencies for certain textures.

Hopefully that's everything. If you have questions for me to answer in the next update please leave a comment below, get in touch with me on twitter at AmnUK or head over to the community discord channel at Discord.gg