Post news RSS Mercy - A little bit of story, the character and more

A little article on how this game came up, how the main character changed in time,and a talk about the game's Combo System.

There was a time when the Zoldat (the main character of Mercy - I Have None) was a guy with an anti-gas style mask, had green mimetic dress and wore a backpack. But if you see it now, it is a guy with a futuristic and clean armor, a lot badboy, no backpack or accessories at all. The only thing they share is the superDeformed look, the communication antenna and they both have a weapon. 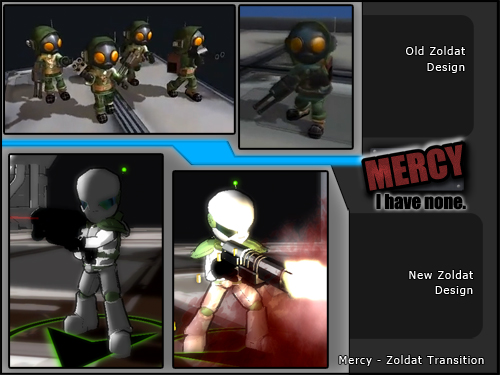 Back then, when i first thought of Mercy, it should have been nothing more than a sandbox, a learning excercise, and something I could reverse my stress into. I had just lost all the data related to my previous project (The Nucleus Project, a real time strategy game) and was completely out of mood, only thinking about starting it all over again was a pain.

I just felt like I wanted to destroy everything that came into the range of my hands, but for monetary and practical reasons, it wasn't feasible, of course.

That precise instant, the idea of Mercy came out. I just wanted to blow up things, yelling some "WAAAAARGH!"s in Rambo mode, and calm down. So, why don't make a game about that?

That game is Mercy - I Have None. This game is nothing more than that. It does not pretend to have a deep storyline, or complex gameplay, or wowing innovative concepts. Just embrace your keyboard and mouse, blast everything that moves, preferably having some fun while doing that, then close the game.

For the first version of the Zoldat, i wanted it to look like a soldier. And so it was. The backpack was for serving the purpose of activating the "combo moves" that i had in mind back then. An advanced piece of tech (the backpack) that was put into the hands of a selected soldier, that could give him some enormous powers (The forementioned combos). Proceeding with the development of the game, I had the sensation in mind that something was wrong though.

It was cool and all, but after seeing it for a month, i couldn't stand it anymore. If the base of the design was the one I wrote earlier, so basically a blastEverything kinda game, I wanted a more badass boy.

So I simply started it all over again. 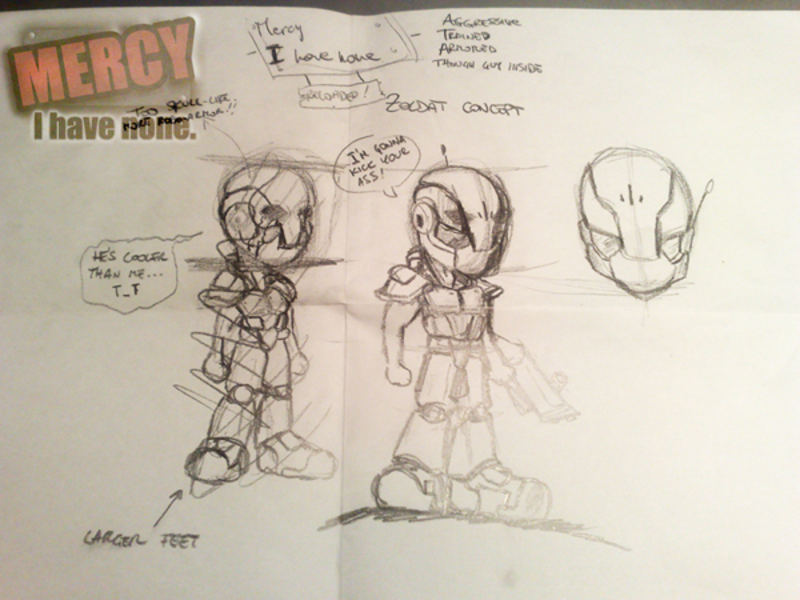 The setting of the game was futuristic, and the old Zoldat wouldn't live up to that setting very well.
I wanted the new one still look super deformed, but a lot more "bad", heavy and armored. Then I drew the new concept, and realized it in 3D. I find that now he is more suited to the setting of the game, to the mood and feel of it.

The only thing that i hate now, is that he lost the backpack in the switch, but I think I'll reintroduce it, maybe as a HUD indicator (with health, grenades and slowmotion time indicators on it).

The combo moves are still there, but they are not combos anymore, basically. With the old Zoldat, i coded a system that, with the pressure of a key, put you into a "combo mode", and while in that mode, you could press a combination of keys, and the system would recognize the combo sequences, starting the foretyped combo.

The problem with that was that the player had to learn the exact combination of keys needed for each combo, and entering the combo mode would stop the pace of the action.

So i created this new method, which is simpler and mocks up some of the power moves you can do in fighting games, but i think it's more well suited to the game. I added a bar on the bottom of the screen, and on regular intervals there is an icon, representing each the respective combo move. Killing enemies, you fill up this bar, and when you reach a specific amount of "combo points", the respective icon will light up, indicating you can now use that combo.

Pressing a key then proceeds to activate the chosen combo, emptying all the combo points.

This method is way more intuitive, does not require the player to learn specific combo key sequences, and does not stop the pace of the game; the Zoldat simply enters in a phase where he executes the combo (in the meantime he is immune to damage) and then the controls are given back to the player, a matter of a couple seconds for each combo.

And hey, with a more robotic, futuristic armor, there is virtually no need of explanations on why he can do those things! :P

Stay tuned for more articles, writeups and things about Mercy - I Have None!
Emanuele Paris

What was wrong with the old design? <_<

I agree. The first concept had a better feel in my opinion. It had a gritty look, which seemed to really fit in with the finger enemies.

Also, the new one looks like generic space man.

Reminds me of Melvin.

Thanks for the feedback.
The old Zoldat design was more "unique", and that's true, but i didn't think it would fit well into all that techy environment (the fingers as they are now are temporary, they will be mixed with mechanical parts in the final release), and all the others enemies that will be there won't have that much "bio" feel to them.
Anyway, the old concept was finished and textured, the current one is not textured, and not finished yet. I hope you will like it once it's completed ;)
And anyway, I still have the old model + the animations, it is not excluded that it could return to make some appearance in the final release...i don't want to trash it completely ;)
Thanks,
Emanuele Paris

Metal Slug (version 1) VS. Megaman (version 2). I like both designs.

Nice reading, keep it up!

By the way, I like both the Zoldat versions.
Why don't you keep the old one as an unlockable/secret character?

Thanks for all the feedback guys!
@EvilDIT: Yeah, at first i thought to make the first character as a secret one for a Bonus Level (or a couple of levels) at the end of the game.

Mercy - I Have None Third Person Shooter
Related Engines