Hi all again mercenaries. In this new Dev Log we will see: Message to the Community Current project status Main Server MMO Dedicated Servers Five new additions to the Team. Failure to submit the web Introducing the Pre-Alpha Images of the main city Possible ideas to implement in the game. Roadmap for September. Two new songs for the soundtrack.

Hi all again mercenaries. In this new Dev Log we will see:

Message to the community:

Mercenaries, the fate of the game is in your hands, progress in development depends on you. We are a small group of developers, with some free time and no budget whatsoever. The game is being developed by and for players. We are few thinkers, if you have any bright ideas, something you think we have not taken into account, leave a comment below and we will answer soon.

Our team works motivated, and for that motivation not to falter, these developers who use their free time building this free game need support. They are encouraged by seeing an increase in visits here, at IndieDB, seeing the rise of the future community of players and that helps making the project broaden and advance at a faster pace.

To end this post, anyone who wants to support the project financially can send us a message asking us how to do it, for now we can only offer your name to appear amongst the first in the game credits, and access to Closed Alpha and Beta. When we introduce the game's funding campaign, we can also offer you a discount on the package you want to purchase.

As a final note, if anyone wants to be part of development just know that our doors are open to anyone able to work seriously. Preferably, we're looking for people who can communicate in Spanish, although it is not imperative. The game will be released in English, French, Spanish and German, and if anyone wants to help us to translate it into any other language is more than welcome.

The current project status is in Pre-Alpha (version 0.01a), but the developer team has split the project in different versions:

- Character control (tech demo), known as Pre-alpha, it's in 0.15x version. During this month we'll be releasing this version and estimate that is finalized by October. Including at the end a multiplayer first version.

- MMO, known as the Alpha phase, this version will be 0.0.01X. In this one there are working three team members, performing both the city (of which you can see some pictures) and the rest of the territory.

This is a small clarification to the questions of some users who follow the project, the game has two different sections altogether.

The main MMO server, when you login in the game you appear by default in 1225, at the medieval city of Pamplona, ​​where recruitment posts are available, which you can use to access different gameplay modes on dedicated servers. In this medieval city the player can socialize, work, participate in tournaments, buy a home and a business. And when you want, in the Beta version of the game, go out to explore the ancient Kingdom of Navarra (50-70 actual sq km).

As we mentioned in the previous section, in the city, which will be the lobby for dedicated servers, there will be recruitment tables where each player wishing to attend any server must sign a "mercenary contract", each one will be different, all depends on the player's fame and their combat skills, winning tournaments held at the kingdom can lead to increased wage in contracts.

Pamplona city will be present at the main MMO server, where you will be able to access other dedicated servers, as we work on the map, and it grows, we'll add recruitment posts, at feudal grants, where you will too have access to the servers.

Players will be able to open dedicated servers with the following game modes: siege, deathmatch, skirmish, duel and battle modes. The raid mode is a special game mode so it will be hosted on official game servers and moderated by the administrators. If there are any doubts leave a comment and we will try to solve them.

Failure to submit the web:

Unfortunately, we were unable to accomplish this, but we don't see it necessary until we launch the funding campaign. So you can wait a few weeks.

We hope you liked it, and those who have played, hope you enjoyed.

Here you have the link to download the pre-alpha

Images from the main city: 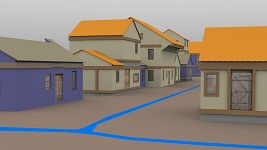 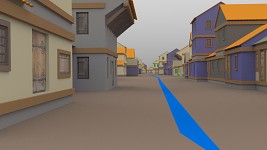 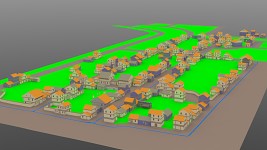 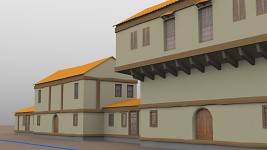 We have several ideas that we would love to implement in the game.

* All this depends on the amount of players they want to see it implemented in game and your support to do it.

What we are going to work on September?:

We're going to work very hard to try to finish the Pre-alpha and step to Alpha:

Two new songs for the soundtrack:

The Rise of Chronos - Indie DB

The pre-alpha demo was very impressive exceeding way pass my expectations. The core mechanics shown are working visually well.
The only things that I think needs optimization that was shown in the pre alpha includes and are not limited to:
-Birds in the background look 2d and cartoonish
-Moving animations in which the arms would morph into the torso when running
-A non working menu (Only the play button works, options are inaccessible)
Of corse, these are minor issues that are not at all gameplay breaking at the moment.